The scientific name of the Jew bush is Euphorbia tithymaloides Linn.

Jew bush is a half-woody, succulent, and erect shrub growing to a height of 1.5 meters or less, with fleshy and stout branches which produce a milky latex. Leaves are green or variegated, fleshy, smooth, alternate, deciduous, ovate or oblong, 3.5 to 7.5 centimeters long, 2.5 to 5 centimeters wide, pointed at both ends. Flowers are reddish, clustered on leafless stems, terminal or axillary. Capsules are 9 millimeters broad.

– Native of the West Indies.

• A study assessing its scavenging properties yielded the antioxidant principles: a kaempferol, quercitrin, isoquercitrin and scopoletin; phenolics and flavonoids – gallic acid and rutin.

• A new proteolytic enzyme, pedilanthain, with anti-inflammatory activity was isolated from the latex.

• Caustic, milky juice of the roots, stems and leaves contains euphorbol and other diterpene esters which are irritants and cocarcinogens. A lectin and proteolytic enzymes are experimentally indicated. 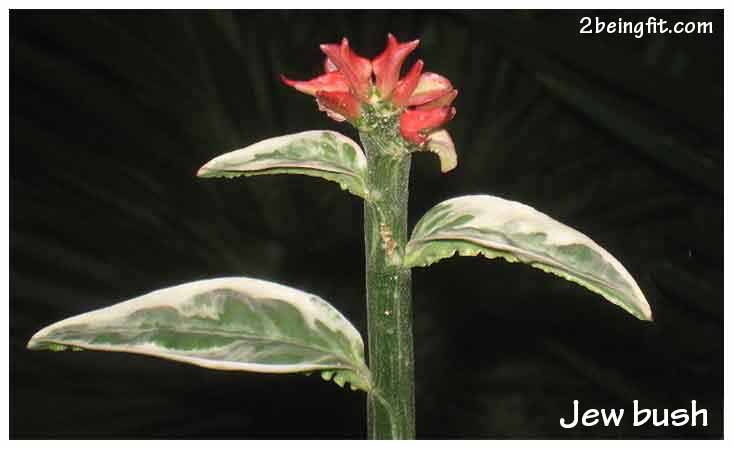 – Root tea has been used as abortifacient and as purgative substitute for ipecacuanha.

– The centipede leg-like leaf arrangement has given it folkloric application for treatment of centipede and scorpion stings.

Anti-inflammatory and antioxidant activity of a medicinal tincture from Pedilanthus tithymaloides: A Cuban study showed inhibition of carrageenan-induced rat paw edema while scavenging assays showed it to be effective against all assayed ROS and RNS. Study results support its traditional use as an anti-inflammatory medicine.

Antimycotic Screening of 58 Malaysian Plants against Plant Pathogens: Of 58 Malaysian plants screened, PT was one of 34 plants that showed selective antifungal activity.

Study investigated the antifungal and antibacterial properties of an ethanolic extract of leaves of P. tithymaloides and some of its constituents.

Ethanolic extract study of P tithymaloides yielded flavonoids, steroids and phenols and showed that phytochemicals from spurge exhibit significant biological activity against mosquitoes and presents a potential as a natural product-based biocide for disease vector control.

The usefulness of a galactose specific lectin from P. tithymaloides was examined to study the hemagglutination pattern in patients with diabetes mellitus. Significantly low titer was seen in patients with insulin dependent diabetes and no significant change in non-insulin dependent diabetics. The low titer was shown to occur along with increased duration of the diabetic condition.

Study isolated pedilanthin, a new protease, from the latex of P. tithymaloides, and was subject4d to anti-inflammatory screening.

Study evaluated P. tithymaloides for a renewable and potential source of hydrocarbons. Extractions yielded a white amorphous mixture of hydrocarbons comparable with gasoline.

Ingested, a few drops of the juice produce irritation of the mouth and throat, vomiting and diarrhea. Externally, the juice produces irritation, inflammation and skin blistering. In the eye, it produces intense and painful irritation, followed by keratoconjuctivitis and temporary reduction of visual acuity. The seeds cause violent persistent vomiting and drastic diarrhea. In livestock, skin lesions are prone to secondary infections.

A case of eye injury consisted of severe conjunctivitis with chemosis and corneal erosion secondary to contact with the sap. Probably mechanism was the combined effect of the plant sap, possible proteolytic activity, and mechanical trauma.

As a potential hazard to eyes, it should not be planted in places easily accessible to children, like gardens and playgrounds. Avoid contact with the sap. Wear goggles when cutting the plant. Skin contact should immediately be washed with soap and water. Topical steroids reduced pain and inflammation. Fluid replacement and hydration may be needed for acute gastrointestinal manifestations.