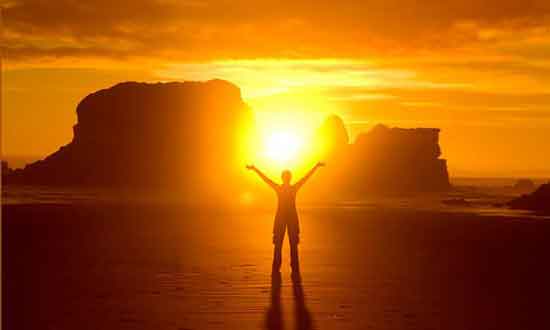 What is Sun Gazing?

The sun gazing method has been known for thousands of years as healing method based on chromotherapeutic principle. It is an act of looking directly into the Sun.

Right way and time to do sun gazing

According to a study, sun gazing is acceptable only if applied 10 min before the sunset.

Sun gazing healing is based on color therapy principle. Gazing has to be directed towards the green-yellow part of the spectrum, since the remaining part of the sun halo contains harmful energy. However, it is suggest to use spectacles with medical filters transmitting wavelight of green-yellow colour, especially for treatment of macular degeneration.

A noted Polish painter, Leon Wyczółkowski, during his long-standing in Ukraine used to paint pictures gazing directly at the sun in order to intensify visual sensations. Damage to the eyes caused by sunlight induced him to become a patient of a famous ophthalmologist in Kiev. Past disease led to blue color vision impairment just like it happens to people who previously suffered from solar maculopathy. As a result, it could gradually force the artist to resign from color painting and to take up drawing.

There was another case in which a 63-year-old female patient complained of dimness in the central field of vision in the left eye after viewing an annular partial eclipse without adequate eye protection on 22 July 2009. Fundoscopy showed a wrinkled macular surface. Fundus autofluorescence study revealed well-demarcated hyperautofluorescence at the fovea. Optical coherence tomography demonstrated tiny intraretinal cysts. Fluorescein angiography and indocyanine green angiography were unremarkable. Epimacular membrane developed in the following month with deteriorated vision. Vitrectomy, epiretinal membrane and internal limiting membrane peeling were performed. Vision was restored to 20/20 after the operation. Direct sun–gazing may damage the retinal structures resulting in macular inflammation and increased focal metabolism, which explains the hyperautofluorescence.

According to another study, exposure to a solar eclipse causes neuronal death in the retina.

However, the human eye is very sensitive, and prolonged exposure to direct sunlight can lead to solar retinopathy, pterygium, cataracts, and even blindness. Even viewing a solar eclipse the eye can still be exposed to harmful levels of ultraviolet radiation.