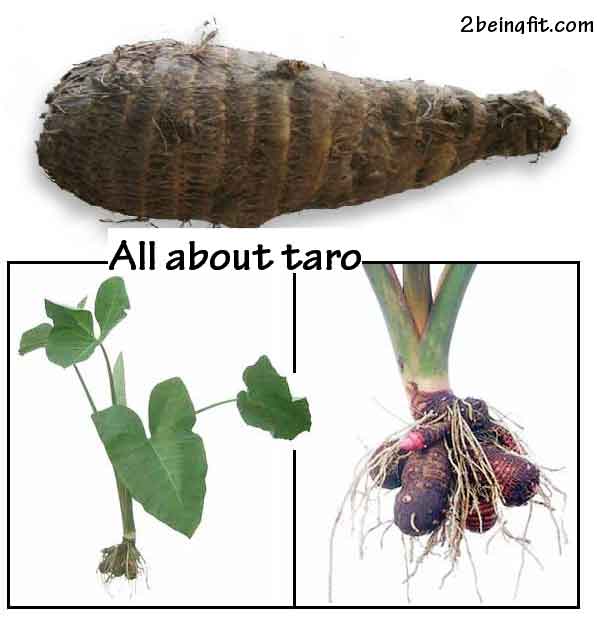 The scientific name of the taro is Colocasia esculenta Linn. It is also known as Elephant’s ear, and Taro potato. Other names include

Taro is a long-stalked herbaceous plant with huge leaves, growing to a height of 30 to 150 centimeters. Rootstock is tuberous, up to 10 centimeters in diameter. Leaves, in groups of two or three, are long-petioled, ovate, 20 to 50 centimeters long, glaucous, with entire margins, with a broad, triangular, basal sinus extending one- third or halfway to the insertion of the petiole, with broad and rounded basal lobes. Petioles are green or purplish, 0.2 to 1 meter long. Peduncles are usually solitary. Spathe is variable in length, usually about 20 centimeters long, the tubular part green, usually about 4 centimeters long, with the lanceolate, involute yellow limb about 20 centimeters long. Spadix is cylindric, half as long as the spathe, green below and yellowish above; male and female inflorescences are each 2.5 to 5 centimeters long, separated by intervals and covered with flat, oblong neuters. It is often cultivated in soil, nearby swamps or water.

– Leaves and petioles are excellent to taste, also rich in minerals.

– Juice of corm is considered laxative, demulcent and anodyne.

– Pressed juice of petioles are styptic.

– Acridity of leaves, petioles and tubers is due to raphides which easily disappear on boiling or cooking. These crystals may cause irritation.

– Prized for its large corms or underground stems, used as staple food in many localities.

– Fresh edible leaves and petioles are a rich source of protein, ascorbic acid, dietary fiber, and some important minerals.

– The corms, petioles and leaf blades are good sources of vitamin B.

– To the early Hawaiians, grown mainly for poi production.

– Its easy digestibility makes it a great nutritional supplement for weight gain needs in cancer-cachexia, AIDS, pancreatitis and a miscellany of weight-loss conditions.

– Juice of petioles sometimes used for earache and otorrhea.

– Juice of the corm used in alopecia.

– Ash of the tubers, mixed with honey, is used for buccal aphthous stomatitis.

– Raw juice of taro, mixed with sugar, used as febrifuge.

– In Hawaii, end of petioles used to stop wounds from bleeding.

– In India, leaves used as anthelmintic.

– Borl tribal people of Goalpara district, Assam, use the leaf juice for boils and pains.

– In Venezuela, the corm is used as an abortifacient and to treat tuberculosis, pulmonary congestion, crippled extremities, fungal abscesses in animals and as an anthelminthic. The Warao use the stem sap for wasp stings. Poi, a ferment from corm shavings, is used bo bathing the sickly to improve muscle tone.

• Lactobacillus / The Medicinal Uses of Poi :

The possibility of poi being a probiotic in medical nutrition therapy was raised. Investigation has determined that the predominant bacteria in poi are Lactobacillus lactis (95%) and Lactobacilli (5%), containing more lactobacilli per gram than yogurt. It was also considered for use in infants with allergies and failure-to-thrive. This review suggests a need to confirm these results.

The anti-cancer effects of poi (Colocasia esculenta) on colonic adenocarcinoma cells in vitro: The study results suggest that poi may have a novel tumor specific anti-cancer activities and suggests further animal studies and human clinical trials.

An ethanol extract study of the leaves of Colocasia esculenta in wistar rats showed significant anti-inflammatory activity with inhibition of carrageenan induced rat paw edema and leukocyte migration and reduction of pleural exudates.

Study isolated 6 C-glycosylflavonoids and one O-glycosylflavonoid from the shoot system of Taumu (CE) identified as schaftoside, isoschaftoside, orientin, isovitexin, isoorientin, vitexin and luteolin 7-O-sophoroside. Some of the compounds showed strong antioxidant activity. Study results suggest the potential of the leaf of Colocasia esculenta as a source of dietary antioxidant.

Study showed an increase in antioxidant stress enzyme activities in response to arsenic exposure may be taken as evidence for an enhanced detoxification capacity of C. esculentum towards reactive oxygen species that might be generated in the stressed plants.

Poi is the pasty starch made from cooked, mashed corm of the taro plant. Study has hypothesized that poi has potential use as probiotic. No scientific studies have explored the potential of poi as a probiotic in medical nutrition therapy. An investigator reports the predominant bacteria in poi are Lactococcus lactis (95%) and Lactobacilli (5%), both lactic-acid producing bacteria. Also, poi contains more bacteria per gram than yogurt. A literature search produced documented evidence that poi shows promised for use in infants with allergies or failure-to-thrive. Study suggests further research for poi as potential probiotic.