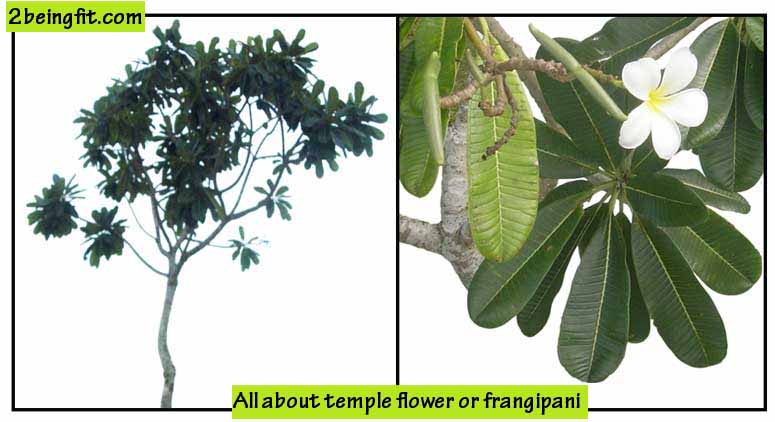 Temple flower or Frangipani  is a small, deciduous tree, 3 to 7 meters high, with a crooked trunk, smooth and shining stems, succulent, with abundant sticky, milky latex. Bark has a smooth, papery outer layer which is grey, shining, and constantly exfoliating in small flakes. Wood is yellowish-white and soft. Branches are thick, fleshy, swollen and leafy at the tips. Leaves are crowded at the terminal end of the branch, commonly oblong in shape, 20 to 40 centimeters long, 7 centimeters wide, spirally arranged at the ends of the branches. Flowers are numerous, fragrant and large, the upper portion whitish, while the inner lower portion yellow, 5 to 6 centimeters long. Fruits are linear-oblong or ellipsoid follicles, with a pointed tip, 15 to 20 centimeters long, 1.5 to 2 centimeters in diameters. Seeds are numerous and winged.

There are several species of cultivated Plumiera, very similar to P. rubra but for the color of the corolla.

– Flowers suppose to be source of perfume known as “Frangipiani.”

– Sweet tasting and neither warming nor cooling in effect, aromatic.

· Decoction of bark is used as purgative, emmenagogue, and febrifuge. Latex is similarly employed.

· Preventive for heat stroke: the material may be taken as a cooling tea.

· Root bark used as remedy for gonorrhea and venereal sores.

· Bruised bark use as plaster over hard tumors.

· In India, bark used as purgative. Bark also used as application for abscesses.

· In Java and Madera, bark decoction used for gonorrhea, dropsy, and dysuria due to venereal disease.

· In Yucatan, latex is used for toothache.

· In Persia, bark is employed against blenorrhagia.

· For dysentery, diarrhea during summer season: use 12 to 24 gms of dried material in decoction.

· Decoction of the bark is used as a counterirritant on the gums for toothache.

· The latex mixed with coconut oil is used for itching.

· The juice is rubefacient in rheumatic pains, and with camphor, is also used for itching.

· A poultice of heated leaves is beneficial for swellings.

· Decoction of leaves for cracks and eruptions of the soles of the feet.

· Infusion or extract from leaves is used for asthma. Leaves also used as cigarettes to inhale in asthma.

· In Mexico, decoction of flowers used in diabetes.

From the heartwood, study yielded plumericin and isoplumericin which molluscicidal, cytotoxic and antibacterial activity.

P rubra was one 41 plants extracts from 18 species that showed antibacterial activity. (3)

Study yielded the presence of tannins, phlobatannins, saponins, flavonoids, steroids, terpenoids, cardiac glycosides and reducing sugar from the crude extract. The antibacterial assay showed the methanol extract to inhibit growth of 14 indicator bacteria. The extract of the flower was more active against B cereus. (5)

Study of a flavone glycoside isolated from P rubra produced a significant reduction of serum triglycerides in alloxan-induced hyperglycemic rats. Antioxidant activity was confirmed through in vitro studies. (7)

Study evaluated a kalachuchi ointment made from a bark extract on patients diagnosed clinically and microbiologically to have otomycosis. Results showed Kalachuchi extract ointment may be a promising antifungal ointment. Cure rate was 75% compared to 87.5% for clotrimazole cream. (14)

Study of flower extracts yielded steroid, flavonoid, and alkaloid in P. alba and tannin, carbohydrate, glycosides, steroids and flavonoid in the flowers of P. rubra. (19)

Study of ethanol extract of green leaves yielded three antimutagens viz. stigmast-7-enol, ursolic acid and lupeol carboxylic acid. The mechanism of action was proposed as a reaction of the oxygen of the hydroxyl group with the C-10 of Mitomycin C to form mono-or difunctional adducts. In addition, changes in membrane permeability which could prevent Mitomycin C from entering into the cell and reacting with the DNA. (20)

In some regions, it is not planted in the immediate vicinity of habitation, believed to cause difficulties with personal relationships and separations.

Refrence for scientific studies used in this article