Wild almond  is a spreading tree reaching a height of 20 meters or more. Leaves are crowded at the ends of the branches, and digitately compound, with 7 to 9 leaflets. Leaves are smooth, leathery, entire, elliptic-lanceolate, 12 to 18 centimeters long, with pointed tip. Flowers are malodorous, dull, yellowish to purplish, 2 to 2.5 centimeters in diameter, and borne on panicles at the axils of the leaves, appearing with new leaves. Fruit is large, smooth, ovoid, red, nearly smooth, obovoid, about 10 centimeters long, containing 10 to 15 seeds, which are black and about 2 centimeters long.

– From northern Luzon to Palawan and Mindanao, in most islands and provinces along the seashore and in semi-open forests at low and medium altitudes.

– Also reported from India to tropical East Africa through Malaya to northeastern Australia. 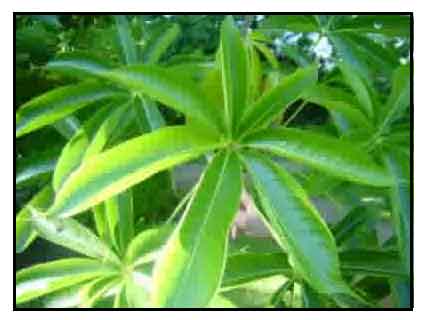 – Kernels are flavored like cacao, but are not bitter, and used to adulterate cacao.

– Oil is bland, sweet, and yellow, with a high melting point.

– Oil is reported to resemble olive oil in its physiological properties, non-toxic, non-irritating, and administered to dogs acts like a mild laxative.

– Fruit contains peanut-like oily kernels which are edible and more or less laxative when eaten raw.

– The oil resembles olive oil and may be useful for culinary purposes.

– Decoction of bark used in the Philippines for dropsy and rheumatism; as aperient, diaphoretic, and diuretic.

– Decoction of leaves as wash for skin eruptions.

– Fruit contains oily kernels which are edible and laxative when raw.

– Decoction of fruit is mucilaginous and astringent.

– Oil from seeds given internally for itching and skin diseases; also applied externally as a paste.

– In Java, decoction of fruit used for blennorrhagia

– Oil: Oil from kernels is used as an illuminant.

– Paint: Oil mixed with white earth is used as paint.

• Fatty Acids: Study of the seed oil showed palmitic acid to be the dominant fatty acid, 52%, with 10% sterculic acid.

• Toxic and Antifeedant Activities: Study of the seed crude extract showed S. foetida acted as insecticide to Asian armyworm, S. litura and as antifeedant to the semilooper, Achaea janata, indicating a dual mode of action against the different pest larvae treated. (8)

• Sterculic Oil / Anti-Obesity: Oil extracted from the seeds of the Sterculia foetida tree may reduce belly fat and help protect against obesity-related issues. The fatty acid content of sterculic oil may inhibit the action of an enzyme associated with insulin resistance, which may indirectly reduce belly fat. The data from rodent studies suggest a potential for developing a natural nutritional supplement. (9)

Study evaluated the phenolic content and antioxidant activity of methanol extract of seeds of S. foetida. The extract yielded 9.5% crude material with a total polyphenol content of 14.32%. Antioxidant activity was assessed by DPPH, ferric reducing power and ABTS. (13)

Paper suggests Sterculia foetida oil is one of the non-edible feedstocks with a potential for biodiesel production. (14) Study reports the production of biodiesel from S. foetida seed oil. Results showed as the percentage of biodiesel increases, the engine runs smoother while efficiency decreases. The blend fuel with 5% biodiesel is better with 2.8% less brake thermal efficiency than diesel.  (18) Study reports on the preparation of biodiesel from S. foetida oil. Physio-chemical properties were compared with sunflower, soybean and rapeseed oil-based biodiesel and were found comparable except for the pour point. (19)

The nasal mucosa is considered a potential administration route for faster and higher drug absorption. Study shows the S. foetida gum can be successfully used as a mucoadhesive natural polymer in developed thermoreversible mucoadhesive nasal gel of zolmitriptan for use in migraine therapy. (15)

Study evaluated the anticonvulsant property of aqueous extract of Sterculia foetida in pentylenetetrazole (PTZ) and MES induced convulsions in experimental rat models. Results showed significant decrease in duration of tonic clonic seizures and recovery time in the MES model. There was delayed onset of seizures and reduced duration of convulsions in the PTZ model. (17)

admirable antimicrobial effect. Results suggest a eco-friendly synthetic procedure with a potential for many pharmaceutical applications. (20)

Study of a methanolic extract of leaves in alloxan induced diabetic albino rats showed significant antidiabetic and antihyperlipidemic effects with restoration of metabolic changes. The percentage reduction was higher in the glibenclamide group. (21)

Study evaluated 21-day old female albino rats of Sprague-Dawley strains on diets partially substituted with S. foetida oil. Results showed 3% oil in the diet, which supplied about 105 mg of sterculic acid per day definitely delayed the sexual maturity of female rat by criteria of age at the time of vaginal opening and regularity and length of consecutive cycles. (22)

Link to all Scientific studies research used in this article