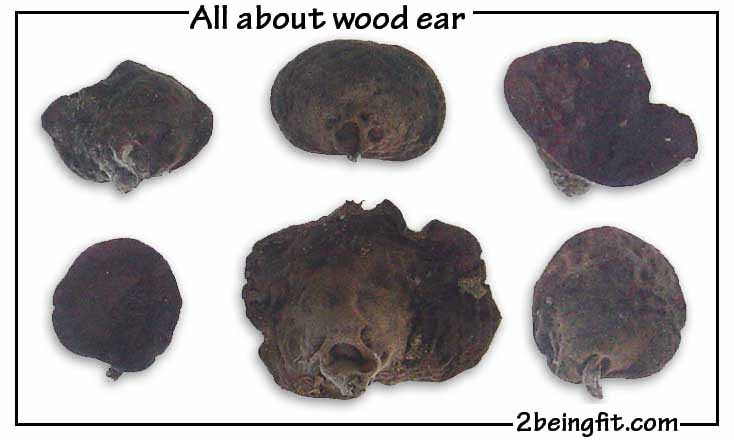 The scientific name of the wood ear is Auricularia auricula-judae Schrot.

“Judas’s ear” name comes from the legend that Auricularia formed its ear-shaped fruiting body as a curse on the tree that Judas hanged himself after his betrayal of Jesus.

Wood ear is a saprophytic fungus, growing in tree stumps in damp moist forests. Plant is formed by multi-celled hyphae extracting nutrients from decaying tree trunks or logged timber. Spores extending from the tree trunk are shaped like human ear, of variable sizes, smooth, dull brown to gray,sticky when moist, leathery when dry.

Auricularia is found throughout the Philippines. Other than the auricula-judae species, another specie reported edible is Auricularia affinis Leville.

Study showed the hypoglycemic effect of a water-soluble polysaccharide from the fruiting body of AA on genetically diabetic mice.

Study isolated an acidic polysaccharide from the edible mushroom AA, with the alkali extract showing highest anticoagulant activity. The effect was through an inhibition of platelet aggregation.

Study showed that up to 9% of Auricularia auricula polysaccharide flour could be included in bread formulation without altering the sensory acceptance of the blended flour at the same time markedly increasing the antioxidant property of the bread. Breads containing AAP may be regarded as health-promoting functional foods.

Study compared the antitumor activities of two (1 goes to 3)-beta-D-glucans isolated from the fruiting body of Auricularia auricula-judae.

A dichlormethane fraction from 70% Auricularia auricula-judae ethanol extract showed the highest level of antitumor activity compared to other solvent fractions. The DCMF was found to have more potent antitumor activity against bronchoalveolar cancer and gastric cancer cells. Results demonstrate the DCMF has a potential as functional additive for enhancing antioxidant activities and suppressing tumor growth in the body.

Study investigated the anti-inflammatory effects of a dichlormethane extract of A. auricula-judae. Results showed significant inhibition of lipopolysaccharide (LPS)-induced nitric oxide (NO) production in a dose-dependent manner. The extract markedly reduced the expressions of inflammatory cytokines (IL-6, TNF-α, and IL-ß) mRNA in LPS-treated murine RAW264-7 macrophages.

Study investigated the antioxidant activities and protective effects of a functional formula diet AHP, containing polysaccharides from Auricularia auricula, polyphenolic compounds from Hawthorn and Pueraria radix. Results showed the AHP possessed potent radical-scavenging effects and inhibitory effects against peroxidation of LDL induced by Cu in vitro. Results suggest the functional formula diet could be a potent alternative as a functional diet to prevent atherosclerosis at early stage.

Study demonstrated consumption of A. auricula-judae had a positive effect in improving blood LDL-cholesterol, triglycerides, and bone density of middle-aged obese women.

Study evaluated the physiochemical properties of melanin from Aa fruting bodies. The melanin showed to be dark with a little red and yellow, with properties similar to those of synthetic melanin and same redox properties of natural melanins previously reported. Results suggest a potential for fruiting body melanin to be used in the food industry as a natural colorant.