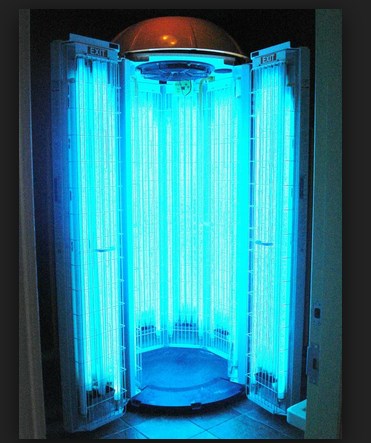 1. What is a sunbed and how does it work? Also known as “tanning bed” and “sun tanning bed“. These are device which emits Ultra violet radiation to produce a cosmetic tan. It uses several fluorescent lamps that have phosphor blends designed to emit UV in a spectrum that is somewhat similar to the sun. Typically, it produces 95% UVA and 5% UVB. Smaller, home tanning beds usually have 12 to 28 100 watt lamps while systems found in tanning salons can consist of 24 to 60 lamps, each of 100 to 200 watts. Wearing googles while using sunbeds is must to protect eye damage.

A tanning booth is similar to a tanning bed, but the person stands while tanning and the typical power output of booths is higher.

Though indoor tanning provide greater control over UV exposure but there are no evidence which provides a safe tan or even safer environment to tan. A number of studies demonstrate that indoor tanners are quite likely to get burned and suffer other skin damage during their indoor tanning sessions.

It is difficult to study artificial tanning vs natural sun exposure, since all people are exposed to the natural sun at some level.

Most tanning bed have approximately same amount of UVA as natural sunlight(as opposed to UVB). While overexposure warning signs which can cause sunburn, does not appear at same rate indoor as out. Radiation level is more intense, due to which require individuals to limit their exposure level to very brief time. Risks associated with indoor artificial tanning are different than natural light.

During moderate natural sun exposure, UVB light induces the body to synthesize Vitamin D. Vitamin D is required for calcium absorption, and improves development and reduces cancer risk. The amount of sunlight required per day is estimated to be approximately the same that a single tanning session provides (10 minutes of strong sunlight every day for many people).

5. Does sunbed helps spots or acne?

Tanning may temporarily help some forms of acne by drying out the skin, but it is not a solution that lasts for very long. Further, most prescription or over the counter acne medications (e.g. benzoyl peroxide, Retin-A), when used in combination with ultraviolet exposure, may lead to burning or delayed healing due to photosensitivity that these drugs (and many others) can create.

7. Sunbed and keratosis, psoriasis, and eczema

Mild to moderate cases of keratosis, psoriasis, and eczema are treated by UVB light therapy of  typically 310 nm to 315 nm portion of the UVB spectrum.

Also, Psoralens combined with exposure to UVA in PUVA. In which, psoralens (photosensitizing agents found in plants) are taken systemically or can be applied directly to the skin helps to effectively clear psoriasis and vitiligo. It’s side effects include nausea and itching after ingesting the psoralen compound. Long term use of PUVA increases higher risk of skin cancer.

8. What are the dangers or risk of using sunbed?

Many research study concluded indoor tanning significantly increases risk of both basal and squamous cell skin cancer. The risk is higher with use in early life (<25 years).

In another study, exposure to sunbeds might increase the risk of developing malignant melanoma, which is form of skin cancer. There are many accumulating evidence that sunbed use is associated with melanoma when started before approximately 30 years of age.

Another study, states that the risk of skin cancers, especially basal cell carcinoma (BCC), and the association is stronger for patients with a younger age at exposure.

The short term effect of exposure to UV radiations include burning, scarring and fragility. With long term exposure it can cause photoageing which results in to skin sagging and loss of elasticity with premature wrinkles.

Long-term eye effects of UV radiation exposure may include the development of pterygium (white or creamy opaque growth attached to the cornea), and squamous cell cancer of the conjunctiva.

Misusing a sunbed by not wearing goggles may also lead to a condition known as arc eye (snow blindness).

According to studies, tanning beds produce mutations similar to those produced by Sun, a known carcinogen.

Studies, have found that Ultraviolet exposure of human skin deletes the function of antigen-presenting Langerhans cells normally resident within the epidermis. This induce suppression of the immune response.