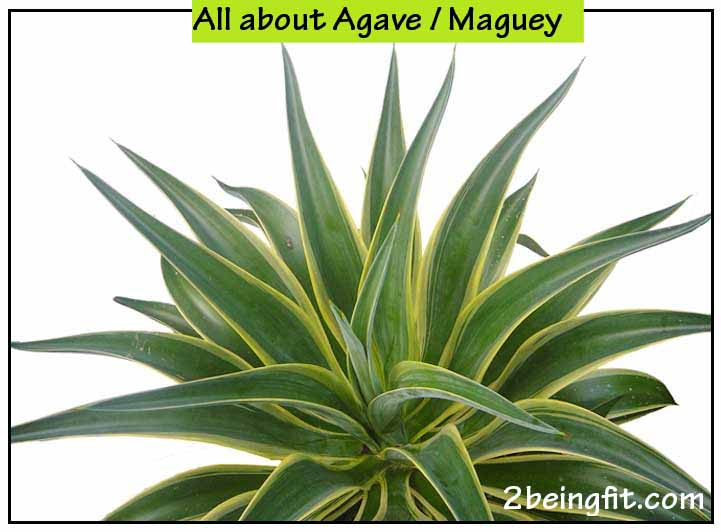 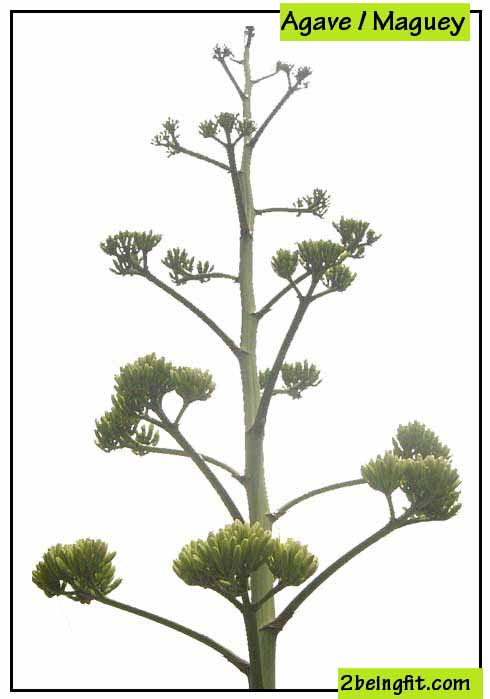 Agave is a tropical plant with about 300 species. The leaves are fibrous, growing upward from the ground forming a massive rosette. Both sides of the leaves are smooth, with prickly edges and a thorny tips. The plant produces a flower stalk in about ten years, and dies after the fruit ripens. The pineapple-shaped heart of the plant yields a sweet sticky juice, agave nectar.

– Study isolated two new spirostanol glycosides: agamenoside A and B.

– The pineapple-shaped heart of the plant yields a sweet sticky juice, agave nectar, which can be made into a syrup and used as a sweetener, with a taste similar to honey.

– For cleansing the blood, a cup daily of an infusion of two grams of finely chopped leaves in each cup of water.

–  Infusion of the leaves used as disinfectant and tonic for falling hair.

– Sap of leaves used internally for wound healing and inflammations.

– Infusion of the plant with honey to soothe irritation of the eyes.

– Agave is best known for its role in tequila.

Study reports on the use of Agave americana fibers as a new low cost and abundant biosorbent to remove metal dye (Alpacide yellow) from aqueous solutions. Findings showed a spontaneous and endothermic biosorption process. (12)

Study reports on a case of Agave-induced purpura in an otherwise healthy patient. Histopathology was consistent with an evolving leukocytoclastic vasculitis. (13) Study reports on 12 cases of self-inflicted contact dermatitis provoked by Agave americana, ten with systemic signs and symptoms, 8 with abnormal laboratory results. Treatment consisted of oral antihistamines and topical saline compresses. (14)

– The sap of Agave americana contains calcium oxalate crystals, acrid oils, saponins, among other compounds. Despite the known irritants, dermatitis is only rarely reported. (see study above) (13)

– A report of 12 cases of contact dermatitis secondary to intentional exposure in soldiers seeking sick leave. (see study above) (14)