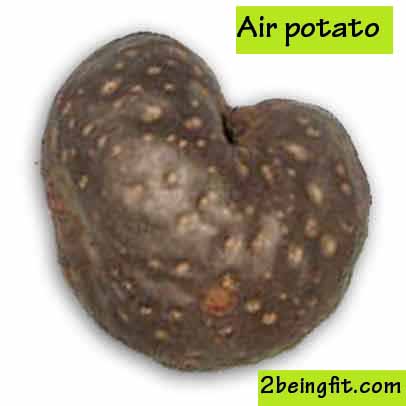 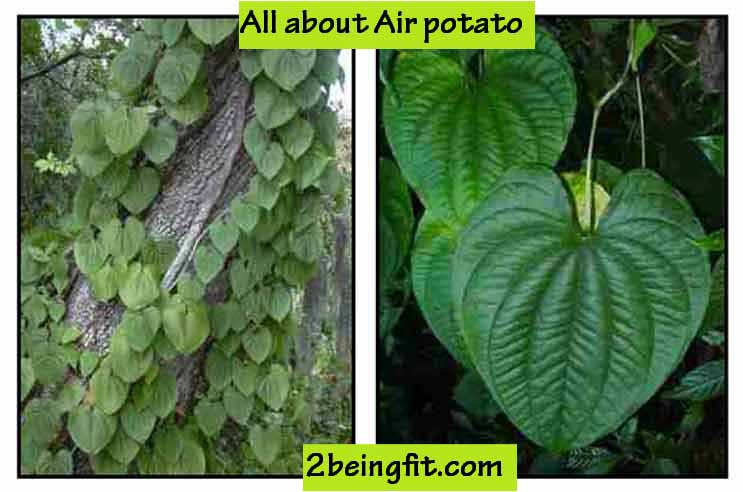 Air potato is a climbing or twining, dioecious, smooth, unarmed vine reaching a length of several meters. Tubers are rounded, not larger than a man’s fist. Stems are terete, bearing numerous little tubers. Leaves are simple, ovate, 7 to 14 centimeters long, with a broad and prominently heart-shaped base, broad and rounded sinus, rounded lobes, and 7- to 9-nerved. Spikes are slender, panicled, numerous, 8 to 10 centimeters long, and rather densely many-flowered. Flowers are about 3 millimeters long. Capsules are longer than broad. Seeds are winged at the base only.

– Sometimes cultivated as an oddity for its tubers.

– Also occurs in India to China and Malaya.

– In the wild, tubers, when fresh, are bitter.

– Cultivated tubers are less or non-bitter.

– Tubers are reported edible, with a flavor similar to potato.

– Some report the tubers are poisonous when raw.

– Tubers taken internally as remedy for dysentery and syphilis.

– Tubers used as resolvent for boils and as diuretic.

– Powdered tubers used as application for sores, piles and to stop diarrhea.

– In India, a folk remedy used to cure wounds, leucoderma and boils. Also, used as tonic, expectorant in asthma, as aphrodisiac and anthelmintic.

– In Chinese medicine, used to treat diseases of the lungs, kidney, spleen and many types of diarrhea.

Anticancer screen carried out in vivo with HepA in mice showed active anticancer compounds from the hydrophobic constituents of D. bulbifera. The anticancer effects were related to direct toxicity on tumor cells.

Study of rhizome extracts yielded 28 compounds. some showed different inhibitory activities against tumor promotion of JB6 (CI22 and CI41) cells. The EtOAc and n-BuOH fractions were found to be potent anti-tumor promoters.

Study in mice showed the EtOAc fraction contains the main toxic ingredients of D. bulbifera rhizome, and the mechanism of hepatotoxicity may be due to liver oxidative stress injury in mice.

Study of D. bulbifera extract showed significant anthelmintic activity, especially against Eicinia fetida, Ascardia galli and Raillietina spiralis. Results provide a rationale for its traditional use as an anthelmintic.

Study of aqueous and methanol extracts from the dry bulbils of D. bulbifera L. var sativa showed a dose-dependent inhibition of pain and inflammation. The exhibited potent analgesic and anti-inflammatory effects may result from inhibition of inflammatory mediators such as histamine, serotonin and prostaglandins.

Study is the first report on the synthesis of silver nanoparticles using D. bulbifera tuber extract, with an estimation of its synergistic potential for enhancement of the antibacterial activity of broad spectrum antimicrobial agents.