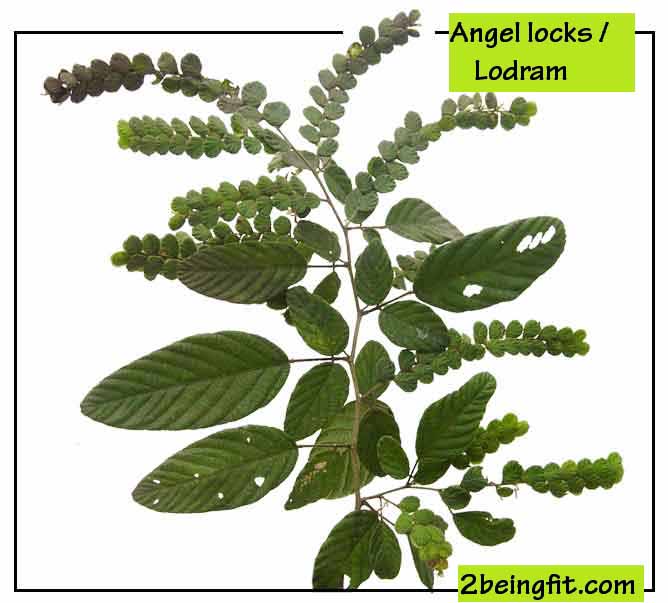 The scientific name of the angel locks is Phyllodium pulchellum.

Angel locks is an erect undershrub, 0.5 to 1.5 meters in height. Leaves are 3-foliate. Leaflets are finely hairy beneath, the terminal one being oblong, 8 to 13 centimeters long, and more than twice as large as the two lateral ones. Inflorescence is terminal and axillary, and 8 to 25 centimeters long. Flowers are white and about 6 millimeters long, umbellate or fascicled, hidden by the distichous, orbicular bracts, which are 1 to 1.5 centimeters in diameter. Stamens are 10, upper one free, other 9 united. Ovary is few- to many-ovuled, superior. Fruits are pods, oblong, hairy and usually of 2, rarely 1- or 3 joints.

– Also occurs in India to China and Taiwan and southward to tropical Australia.

– Collect leaves from May to October, roots the whole year round.

– Study yielded a new glycoside, the 1-glucosylrhamnoside of physcion from the seeds of D pulchellum.

· In the Philippines, leaves are applied to ulcers.

· In Java, the leaves are applied to pocks.

· Decoction of dried leaves used for colds and fever.

· Decoction of dried roots used for malaria, swelling and enlargement of liver and spleen, rheumatism,bone pains, and swelling due to contusion or sprain.

· Malays use a decoction of roots after childbirth.

· Decoction of flowers for bile and liver afflictions.

· In India, paste of root mixed with sugar candy used for abdominal and chest burning discomforts.

In India, the leaves of D pulchellum is one of 20 plant species used by the Deori tribe for the preparation of Mod pitha, a natural starter for the brewing of Sujen, a local rice beer.

The Ayta people of Porac, Pampanga burn the whole plant, stem or leaves as repellent against hematophagus insects.

Scientific studies on benefits and uses of angel locks

Effects of the extract from Desmodium pulchellum in rats – Study of extracts on mice showed major effects on motor, respiratory and cardiovascular systems. The bark extract showed to be most potent.

Study showed the total alkaloid of Desmodium pulchellum could restrain collagen protein I, III, IV and synthesis of TGF ß1 for hepatic fibrosis in mouse liver. (2)

Study on effects of D. pulchellum’s root extract showed the herb may have an antihelmintic effect on the fluke Opisthorchis viverrini in hamsters. (6)

Study of extract of D. pulchellum in mice showed an activity mediated via the serotonergic system and suggested a potential for the extract as a useful antidepressant. (7)

Study showed Desmodium pulchellum extract has anti-hepatic fibrotic effects on rats with hepatic fibrosis induced by CCl4. The mechanism may be through increasing the liver cell immunity against injury and indirectly reducing the formation of liver collagen protein. (8)