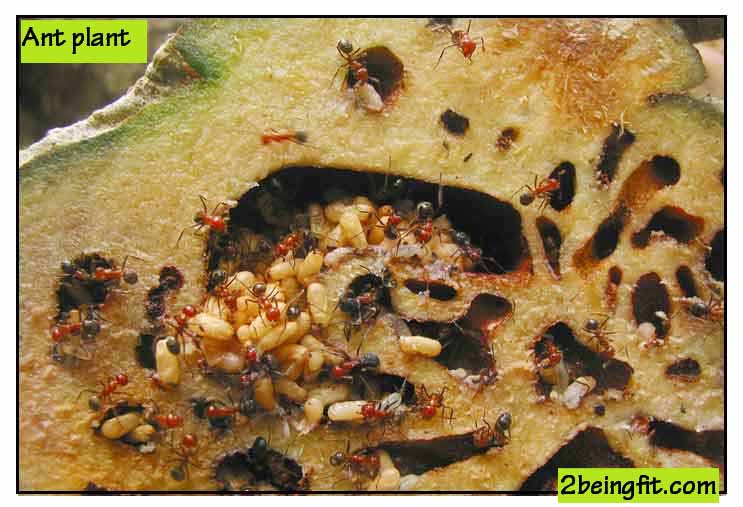 The scientific name of the ant plant is Hydnophytum formicarum Jack.

Ant nest is a plant name, and not referring to a nest of ants. Ant nests are plants from the Hydnophytinae. They are epiphytes, attached to other plants, but no parasitic (living on the host) but merely using it to stick on. Hydnophytum consists of 45 species, with 26 species from Myrmecodia, make up 71 species of ant nests. All have hollow stem bubble-like fruit cavities inhabited by ants.

Banghai is an epiphyte. Lower stem is very greatly swollen into a large, rounded, fleshy, tuberous structure containing numerous labyrinthine cavities which are inhabited by ants. Leaves are opposite, thick, elliptic-obovate, 4 to 10 centimeters long, rounded or very bluntly pointed at the tip, and wedged-shaped at the base. Flowers are solitary or few fascicled, borne in the leaf axils, pale white, about 6 millimeters long. Corolla is salver-shaped, about 5 millimeters long, cylindric, with four tufts of hairs in the throat. Fruit is juicy, yellowish-red when ripe, broadly ovoid, and about 5 centimeters long.

– In mangrove swamps in Luzon (Quezon) and Polillo.

– Also occurs in Indo-China, the Malay Peninsula, Sumatra, Borneo, to the Solomon Islands and northern Australia.

– Decoction of swollen, woody base used as remedy for liver and intestinal complaints.

– In the Dutch Indies, poultice of pounded tubers used for headaches.

– In Indonesia, used to treat swelling, headaches and rheumatism.

– Decoction of rhizomes used for cholera.

– In Thailand, used for the treatment of cancer.

Study isolated flavonoid and phenolic compounds: isoliquiritigenin, protocatechualdehyde, butin and butein. The ethyl acetate extract showed to be a potent antioxidant. and exhibited activity against many Gram-positive and Gram-negative bacteria.

Study on cytotoxicity showed less cytotoxicity against all types of cancer lines but high antioxidant activity.

Study evaluated the ability of ethanolic and phenolic-rich extracts and its its major phenolic compound, sinapinic acid in inhibiting the proliferation of 5 human cancer cell lines. Results showed the rhizome extracts to possess both antiproliferative activity and HDAC activity in HeLa cells. Sinapinic acid inhibited the growth of HeLa and HT29 cells more effectively than sodium butyrate. The growth inhibitory effects were mediated by the induction of apoptosis.