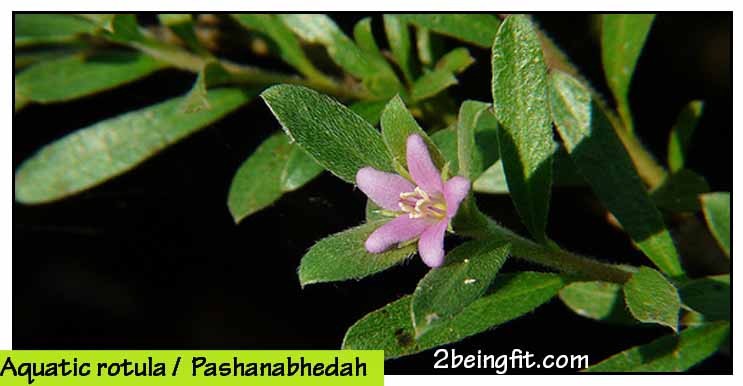 Aquatic rotula is a shrub or bush that grows to a height of 2 to 3 meters. Leaves are alternate, imbricate, ovate-oblong, usually 0.8 to 1.5 centimeters in length, and short-stalked. Flowers are small and crowded, and borne on terminal inflorescences. Sepals are five, about 4.5 millimeters long, and narrow with sharp points. Corolla is purple or pink, 5 to 6 millimeters long, and five lobed. Fruit is an orange or red drupe, somewhat rounded, fleshy, about 4 millimeters in diameter, and containing four seeds.

– Grows characteristically among rocks crevices and trailing over gravel bars in stream beds at low altitudes in Cagayan, Isabela, Ilocos Norte, Zambales, Bulacan, and Rizal Provinces in Luzon; and in Mindoro.

– Roots have yield allantoin and a sterol, rhabdiol.

– Root considered laxative and diuretic. The diuretic action of the root is attributed to allantoin.

– Decoction of stems used as sudorific and diuretic.

– Root decoction is used as diuretic and laxative.

Study screened the decoction of Rotula aquatica for antilithic activity in male Wistar rats with induced-nephrolithiasis. Results showed reduction of calcium and oxalate ion concentration in urine, confirming a stone inhibitory effect. The decoction showed no toxicity over a 45-day treatment period. (3)

In a study of three plants, the aqueous extracts of Rotula aquatica and C wightii showed crystal dissolving activity against monosodium urate. (5)

Study evaluated the antimitotic activity of R. aquatica. The mitotic index of the root tips markedly decreased with increasing concentration of the aqueous extract. Results showed extract of R. aquatica were extremely effective in the prevention of cell proliferation of the pancreatic cancer cell lines. (2)

Study evaluated the antiurolithic effect of an alcoholic extract against ethylene glycol-induced urolithiasis in albino rats. Histopathological studies confirmed reduction of lithiasis after treatment with the extract. (10)

Links to the sources of this article