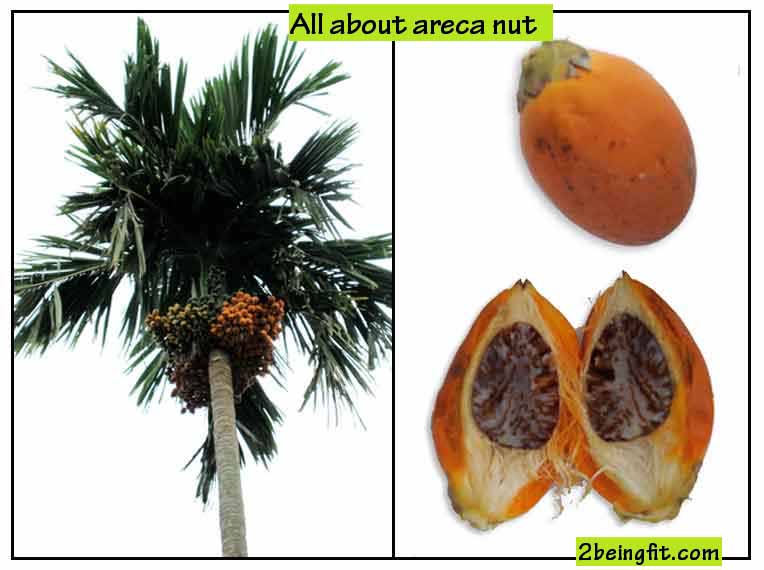 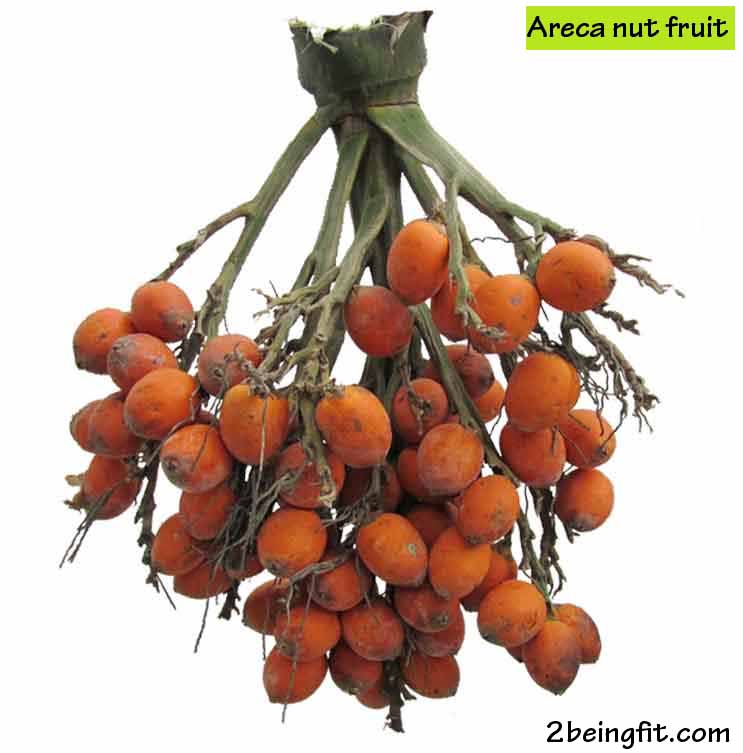 Areca nut is the fourth most commonly used psychoactive substance in the world, chewed regularly by at least 10% of the population, with high prevalences in South and Southeast Asia.

Its is an erect, solitary tree growing to 25 meters high, and marked with annular scars. Leaves about 3 to 4 meters long with numerous leaflets, 60 to 90 centimeters long, the upper ones confluent. Spadix is much branched and compressed, with the branches filiform above, bearing very numerous, somewhat distichous male flowers which are yellow and about 5 millimeters long. Female flowers are at the base of the branches and in axils, about 1 centimeter long or more. Fruits are ovoid, smooth, orange or red when ripe; 4 to 6 centimeters long, with a somewhat fleshy pericarp and fibrous mesocarp.

– Cultivated throughout the settled areas of the Asia.

– Spontaneous in some places.

– Possibly native of the Philippines.

– Also occurs in the Old World Tropics generally, and has been introduced into the New World.

• First seed analysis was reported to have been performed in 1886 by Bombelon, who isolated a liquid volatile alkaloid given the name arecaine.

• An analysis of Philippine betel nuts reported the tannin to be located almost entirely in the kernel; the husk containing only traces. As the green nut ripens, the amount of tannin in the kernel decreases.

• The kernel yields gallic acid and a gum.

• The tannin is located almost entirely in the kernel which decreases as the nut ripens.

• Arecoline resembles pilocarpine and muscarine in its effect.

• Young nuts astringent from the tannic and gallic acids.

• Young nut is succulent and sweet-tasting; the mature one, bitter and savory.

• Fresh nut is somewhat intoxicating and produces giddiness in some persons. This was reported as early as 1563 in Malacca by Garcia de Orta.

• Increases the flow of saliva, sweetens the breath, strengthens the gums and produces mild exhilaration.

• Arecholine is a highly toxic substance, and its pharmacologic action resembles that of muscarine, pelletierine and pilocarpine. It violently stimulates the peristaltic movements of the intestine, produces constriction of the bronchial muscles which can be overcome by adrenaline or atropine. It is a powerful sialagogue and stimulates sweat secretion.

· Cabbage (ubod) is edible, raw as salad or cooked.

· In the Philippines, the buyo is regarded as tonic and general stimulant, but harmful with excessive use which can cause loss of appetite, salivation, and general degeneration of the organism.

· Fruit in decoction considered abortifacient, the nut as an emmenagogue.

· Tooth whitener: Carbonize and powder a kernel and rub on teeth.

· In excess, nuts can cause vomiting and diarrhea; intoxicating to some.

· Young nut is useful in bowel complaints. Tincture used as astringent gargle, and when diluted with water, useful for bleeding gums and may be used for stopping water discharges from the vagina. It is also used for stopping the pyrosis (heartburn) of pregnancy.

· Dried nut is stimulant, astringent and taeniafuge. It increases the flow of saliva; sweetens the breath, strengthens the gums and produces mild exhilaration.

· In Ayurvedic medicine, the nut is used for headaches, fever and rheumatism.

· In China, used to treat parasitic infection. Also, used for dyspepsia, constipation, beriberi and edema. The bark is used for choleraic affections, for flatulence, dropsical and obstructive diseases of the digestive tract.

· Ointment made from finely powdered catechu and lard used for chronic ulcerations.

· In southern India, dried fruits are powdered and heated with coconut oil and applied topically on burns.

· In Malaya, young green shoots are used as abortifacient in early pregnancy.

· In India, juice of young leaves mixed with oil is used externally for lumbago. Also used for urinary disorders and reported to have aphrodisiac properties.

· In Keral and Tamil Nadu states of India, nut extract is a popular remedy for migraine headaches.

· In the rural areas of Dakshima, Kannada, husk fibers are used for cleaning teeth.

· In India and China the areca nut has been used as anthelmintic since time immemorial.

· In the Materia Medica of ancient China, the betel nut is considered masticatory, dentrifice, and vermifuge.

· In Indo-China, Punjab, and Cashmere, the kernel of the fruit is one of the constituents of the general masticatory of the East – the “betel” or pan.

· Betel chewing: In the Philippines, as well as in Indo-Malayan and Polynesian regions, the Areca nut is extensively used for chewing with lime and ikmo leaves (Piper betel) or litlit (Piper retrofactum).

· Poison: In the Dutch East Indies the root is shredded, steeped in water and pounded to extract the juice, and used as poison in food or drink.

Scientific studies on benefits and uses of areca nut for health

It has been long believed that the areca seed is a carcinogen causing buccal cancer, an effect that comes from N-nitrosoamine from chewing. The study also showed the seed has strong radical-scavenging antioxidant benefit. The water and methanol extracts of the seeds in various ages show a higher % tannin and total phenols than other parts of the tree extracts. (2)

Study on different wound models in Wister rats showed the alkaloid and polyphenols could be used to enhance healing of skin graft surgery, leg ulcers and burn wounds. (3)

• Effects on Symptoms of Schizophrenic:

Male high-consumption betel chewers had significantly milder positive symptoms than low-consumption chewers over 1 year. Betel chewing was associated with tobacco use but not with cannabis or alcohol. It was not associated with global health, social functioning or movement disorders. (12)

(1) Areca alkaloids act as competitive inhibitors of g-aminobutyric acid receptors in the brain, cardiovascular system and pancreas, possibly increasing the appetite or altering insulin secretion. (2) BQ components induce keratinocytes to secrete tumor necrosis factor-a (TNF-a) and interleukin-6 which may provoke chronic inflammation. The muscarinic action of arecoline, the most abundant betel nut alkaloid, is the most promising pharmacologic explanation for the beneficial effect.

Nitrosated derivatives of arecal alkaloid, proven carcinogens in animals, also increase the risk of tumors in man. Nitrosated compounds are also diabetogenic in mice producing type2 diabetes with central obesity with increases in markers of inflammation and cardiovascular damage.

Study on A. catechu showed an anti-inflammatory effect on carrageenan-induced edema in mice and rats. On analgesic activity, the crude extract showed a dose-dependent inhibitory effect on formalin-induced nociception in mice and acetic acid-induced writhing in rats, similar to aspirin. In DPPH assay, it showed free radical scavenging activity. (10)

In the study, the methanolic extract of A. catechu exhibited strong antiradical activities and reducing power. The extract yielded a significant amount of phenols and flavonoids.

Study showed the water and methanol extracts of A. catechu and betel quid could prolong swimming time of mice, decrease the concentration of serum nitrogen and lactic acid, increase the liver glycogen content of mice after swimming.

Study showed arecoline enhanced the contraction of the longitudinal smooth muscle rat colon in a dose-dependent manner. Results suggest that arecoline increases colonic motility via the M3 receptor, which depends on the influx of Ca2+.

Study of ethanol extract of A. catechu showed a significant decrease in the duration of estrus and a significant increase in proestrus. In the evaluation of its abortifacient effect, the mean percentage of abortion was significantly increased.(17)

Studies have shown strong molluscicidal activity against harmful snails for control of fascioliasis.

Study showed the dichlormethane fraction was effective in alleviating withdrawal jumping in morphine-dependent mice, one of the most common signs used to assess the severity of morphine withdrawal. The fraction also inhibited MAO-A and acted as anti-depressant, increasing bioavailability and enhanced neurotransmission of monoaminergic, serotonergic and noradrenergic systems in the brain. Activation of these systems reduce the severity of opiate withdrawal. (18)

Study evaluated the effect of wet and dry A. catechu extracts on learning and memory in rats. Wet A. catechu extract showed greater increase in spatial memory and learning. The effect was attributed to a higher amount of arecoline in the wet extract.(24)

An ethanolic extract of kernel was prepared into a 2% ointment form and evaluated in a rat model with induced burn wounds. Results showed significant increase in wound contraction rate. (25)

Study evaluated the antifertility effect of an alcoholic A. catechu in male albino rats. Results showed dose-dependent 50% to 100% reduction in fertility at 300 to 600 mg/kg bw doses respectively.. Testes histology showed reduction in secondary spermatocytes and spermatids, reduction in Leydig cells and increase in diameter of seminiferous tubules. (26)

Study showed a nut extract exhibited significant inhibition of iNOS, possibly the mechanism for its anti-migraine activity, giving some support for its folkloric use. (28)

Study evaluated several extracts of A. catechu leaf in Wister rats with streptozotocin-induced diabetes. All the extracts significant exhibited anti-diabetic activity; the methanol extract was the most active. (30)

Study showed A. catechu pollen to be a significant contributor to the aeroallergen load in India. Its partially purified IgE-reactive fraction could be useful in treatment. The nut extract showed remarkable cross-reactivity with the pollen. (31)

In the study, accelerated water extraction method was used to extract catechin from A. catechu seeds. Catechin in known for its antioxidant, antihypertensive, and anticancer properties. (35)

• Removal of Lead from Water / Heartwood:

Study evaluated various extracts of A. catechu leaf in Wistar rats. All extracts at 200 mg/k orally significantly exhibited anti-diabetic activity in STZ-induced rats. The methanol extract was most active. Glibenclamide was used as reference drug. (37)

Areca nut has been causally linked to oral submucous fibrosis, a potentially malignant condition of the mouth, pharynx, and esophagus. Daily intake of copper in American diets average 1.0 mg per day, 60% of which is absorbed. Study indicated an adult Indian chewing areca daily will consume about 5 mg of copper daily, with a substantial but unknown quantity to be absorbed. Study suggests investigation of the role of copper in areca products in the pathogenesis of oral sumucous fibrosis. (42)

– Not recommended during pregnancy and breastfeeding.