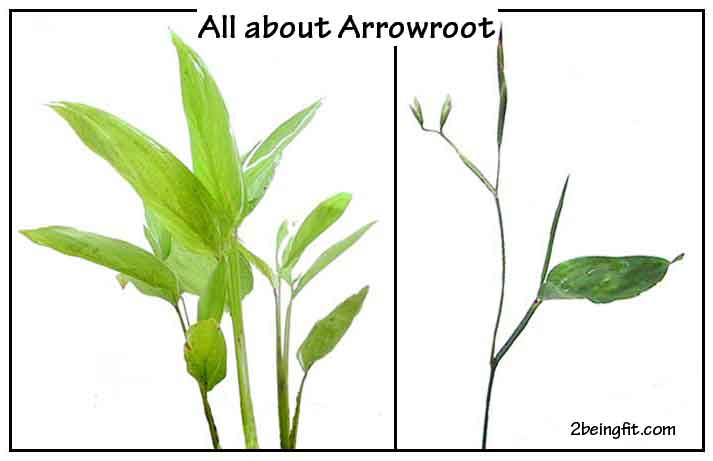 The scientific name of the Arrowroot is Maranta arundinacea Linn. It is also known as Maranta, Obedience  plant and Araro.

Although “Arrowroot” refers to any plant of the genus Maranta, its popular use is to describe the digestible starch from the rhizomes of the Maranta arundinacea. There is evidence to show arrowroot cultivation 7,000 years ago.

The word may derive from  a corruption of the Aru-root of the Aruac Indians of South America,  Aru-aru. referring to the native Caribbean Arawak people’s “meal of meals” for which the plant is a dietary staple, and Arrowroot’s use for treating poison arrow wounds.

Year-old roots are used; and when good, contain 23% starch. After washing and clearing of paper-like scales, It is beat to a pulp through a wheel rasp. The milky fluid is passed through a coarse cloth or sieve; the resultant pure low-protein mucilaginous starch settles as an insoluble powder that is sun-dried or processed dried power to become the arrow-root of packaged or canned commerce.

– Widely distributed in the world in cultivation for its starch-storing rhizomes.
– Native of tropical America.
– Now pantropic.

– Rhizome skin yields a bitter and resinous substance, removed in peeling in the preparation of arrowroot starch.

– The starch is white, odorless, tasteless.

– Used as thickener in making puddings, baked goods, and sauces.

– Boiled and roasted or ground and made into pastries.

– Valuable as an easily digested and nutritive and nourishing diet for the convalescing.

– Well suited for infants in the weaning from breast milk.

– Recipe Preparation: Decoction from 2-3 tablespoonfuls of root powder in one liter of water, seasoned with honey, lemon or any variety of fruit juices to taste.

– In the West Indies, roots used for poulticing poisoned and other wounds.

– Mashed roots as plaster applied to areas of insect stings and spider bites.

– Applied to the skin to soothe painful, irritated and inflamed mucous membranes.

– The fresh juice is used as antidote for vegetable poisons.

– Used to soothe the stomach and as a remedy for diarrhea, probably from its high starch content.

– Ancient Mayans and other Central American tribes used it as antidote for poison-tipped arrows.

– An ingredient in many natural deodorants.

Study on the effect of boiled and cooled supernatant of arrowroot and water on children during acute diarrhea showed a decrease in cholera toxin-induced net water secretion or reversal to net absorption.

Study showed the water extract of Arrowroot tea at 10% greatly inhibited the microbial growth of gram-positive and gram-negative pathogens tested.

• Potential Source of Ethanol: Study evaluated Uraro (Arrowroot) for its potential as source of ethyl alcohol or ethanol. Three different treatments of rhizomes and water were used. The percentage purity of the alcohol in all treatments based on 56% purity.

• Effect on Survival of Probiotic Bacteria in Yoghurt:

Study investigated the antidiarrheal and cytotoxic activities of a methanolic extract of M. arundinacea leaves in rats and brine shrimp, respectively. Results showed an antidiarrheal effect with significant reduction of castor oil-induced intestinal volume and intestinal transit comparable to standard drug loperamide. The extract also showed potent effect against brine shrimp with an LD50 of 420 µg/mL.