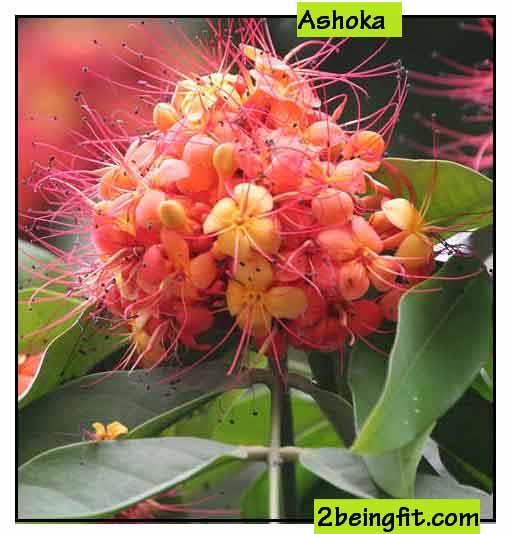 Asoka tree is considered sacred throughout India, frequently found in royal gardens and planted close to temples. It is a recurrent element in Indian art and mythology, with a Yakshi holding the branch of a flowering Ashok tree. It is also considered a sacred tree in Hinduism, worshiped in Chaitra, the first month of the Hindu calendar.

Ashoka means “without sorrow,” referring to the bark’s reputation for keeping one healthy and youthful. Buddha was believed to have been born under this tree. (27)

Asoka is usually a small tree growing up to 10 meters high, slow-growing when young. Bark is dark brown, grey or black. Leaves are alternate, and even-pinnate, 15 to 25 centimeters long with with 3 to 6 pairs of leaflets. Leaflets are oblong or oblong-lanceolate, often blunt , up to 22 centimeters long. Flowers are fragrant at night, orange red or red, depending on age. Corymbs are 18 centimeters across. Pod is up to 25 centimeters long.

– Cultivated in India to the Malay Peninsula.

– Bark used in menorrhagia due to fibroids, leucorrhea and internally bleeding.

– Juice of flowers used as coolant against biliousness.

– In India, Sri Lanka, Bangladesh, and Pakistan, Ashoka bark is used by women for the treatment of menorrhagia, and other menstrual and uterine disorders. In Ayurveda, used in the treatment of wounds, poisoning, tumors, diarrhea, worm infestation, abdominal swelling. In Unani medicine, used for anorexia, dermatitis, indigestion, animal bites, and as hair tonic. (26)

Petroleum ether extract of leaves and chloroform extract of bark were effective against the larvae of C. quinquefasciatus. (3)

Various extracts of stem bark were tested for antibacterial and antifungal activities. A methanolic extract showed strongest activity against both bacteria and fungi. (6)

Study has shown stimulatory effect on ovarian tissue and may produce an estrogen-like effect that enhances the repair of endometrium and stops bleeding.

Study showed an oxytoxic effect in rat and human isolated uterine preparations.estrogen-like effect that enhances the repair of endometrium and stops bleeding.

Ethanolic and methanolic extracts of S. indica exhibited dose-dependent anthelmintic property. Both extracts were more potent than the control. The presence of alkaloids, glycosides, terpenoids, tannins and flavonoids may be the responsible phytochemicals for the anthelmintic activity.

Extracts exhibited a dose-dependent analgesic activity. Significant activity was noted in the tail immersion method, with highest activity after 90 minutes like that of the standard drug. (9)

Study evaluated an acetone extract of seeds of S. asoka for anti-inflammatory treatment for arthritis in Freund’s adjuvant-induced arthritis in Wistar albino rats. Results confirmed significant nontoxic, antiarthritic, and anti-inflammatory pharmacological effect of S. asoca extract, attributed to the presence of flavonoidic compounds and lowering of prostaglandin levels in the blood. (17)

Study of bark extract of Saraca indica showed antioxidant and antibreast cancer activity. Toxicological study suggests the extract is safe to use and a potential for use as complementary and alternative medicine for breast cancer therapy. (28)