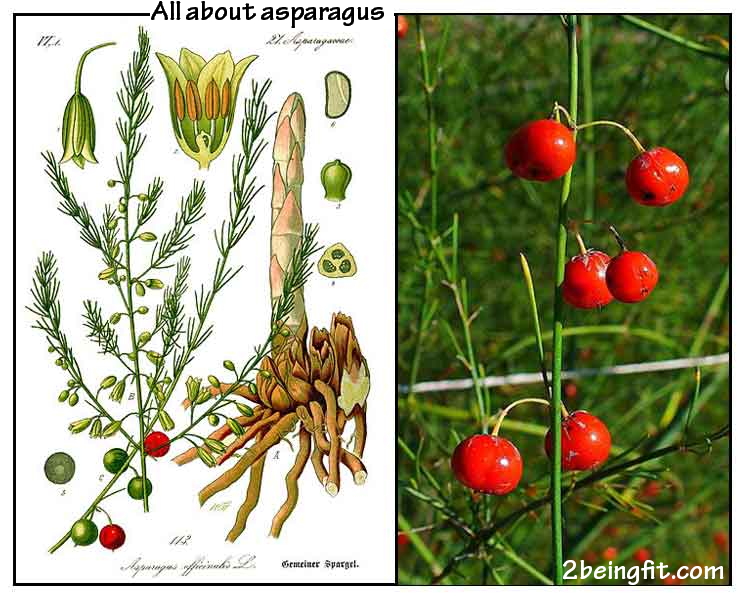 Asparagus is an erect, unarmed, branched herbaceous perennial herb, growing up to 1 meter in height. Leaves (scales) are very minute, and the cladodes (branchlets) fascicled, slender terete, 0.5 to 1.5 centimeters long. Flowers are axillary, fascicled, solitary or in pairs, pedicelled, the perianth straw-yellow or greenish yellow, about 5 millimeters long. Fruit is globose, 6 to 10 millimeters in diameter, fleshy red when ripe.

– Cultivated as an ornamental and  for its vegetable.

– Now cultivated in all temperate and subtemperate countries.

– Amino acids and inorganic mineral contents were found much higher in the leaves than the shoots.

– An 1891 study identified methanethiol (a sulfur compound, also known as methyl mercaptan) present in the urine of some asparagus eaters, absent in others.

– Asparagusic acid and its derivatives, such as dihydroasparagusic acid, are sulfur-containing compounds found in asparagus but not in other related vegetables.

– Asparagin imparts the characteristic strong urine smell, and believed to stimulate the kidneys.

– Green resin is believed to be calming to the heart.

– Fruit is considered poisonous to humans.

– A much desired vegetable, especially the tips.

– Given in doses of 1 to 2 grains, combined with potassium bromide, for cardiac dropsy and chronic gout.

– Water in which asparagus was boiled, although disagreeable, is good for rheumatism.

– In Tehran, roots are burned and smoked to relieve toothaches.

– Rhizome is used as cardiac sedative, palliative, diuretic, and laxative.

Study showed treatment of HepG2 human hepatoma cells with a leaf extract suppressed more than 70% of a marker of reactive oxygen species (ROS). Cellular toxicities induced by H2)2, ethanol, or CCl4 were significantly alleviated with the leaves and shoot extracts. The enzymes that metabolize alcohol–alcohol dehydrogenase and aldehyde dehydrogenase–were up-regulated by more than 2-fold. Results suggest the mechanisms for alleviation of alcohol hangover and hepatoprotection against toxic insults, and a use for the typically discarded parts.

The Myth: The asparagus urine with its unusual smell has long been attributed to sulfur-containing compounds. Some most people emit the strong odor of asparagus urine, some people don’t. The article by John H. Studies suggest two separate traits: some people secrete the compounds in their urine but can’t smell them, while some people don’t secrete the compound but can smell them in other people’s urine. An 1891 study identified methanethiol (a sulfur compound, also known as methyl mercaptan) present in the urine of some asparagus eaters, absent in others. A 2001 study, isolated 12 different sulfur compounds in the vapors of asparagus urine, absent in normal urine, which included methanethiol and dimethyl sulphide, to which were attributed the distinctive odor. Results suggest a clear variation in two different traits: excretion of sulfur compounds in urine after eating asparagus, and the ability to smell those compounds. A simple dominant one-gene character is suggest for excreting. The genomic smelling/non-smelling trait still needs to be identified. (From Asparagus urine smell: The myth / Myths of Human Genetics / John H. McDonald, University of Delaware)

Study evaluated and compared the bioactive compounds in ten varieties of Asparagus officinalis, especially asparaginiase and flavone and rutin contents in roots, leaves, and spears. Asparaginas activity was significantly higher in roots than spears and leaves. Flavones and rutin were higher in the leaves than roots and spears.

Wild-crafted.
Extracts in the cybermarket.