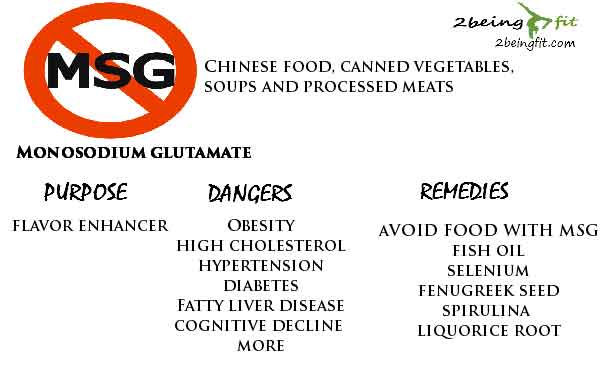 MSG is found in foods such as stews, meat soups, Chinese food, canned vegetables, soups and processed meats. It is particularly popular in Korean, Japanese and Chinese cuisine.

MSG has been used as a food additive for decades. Food containing MSG produces adverse reactions also known as MSG symptom complex including

Dangers and harmful side effects of MSG on health

A study has shown that glutamate levels may contribute to the production and development of Amyotrophic Lateral Sclerosis (ALS), which is  is a specific disorder that involves the death of neurons. ALS is characterized by stiff muscles, muscle twitching, and gradually worsening weakness due to muscle wasting. This results in difficulty speaking, swallowing, and eventually breathing.

According to a study, a single intake of monosodium glutamate (MSG) increases muscle sensitivity and other adverse effects such as headache and short-lasting blood pressure elevation for which tolerance did not develop over 5 days of MSG intake.

Study has found that the dietary additive excitotoxins MSG and aspartame contribute to fibromyalgia symptoms.

In another study, the elimination of MSG, Aspartame and other excitotoxins from the diets of patients with fibromyalgia is a successful treatment option.

Aspartame (ASP) is a low-calorie dipeptide sweetener found in a wide variety of diet beverages and foods which may promote  may promote weight gain and hyperglycemia. According to a study,  aspartame exposure may promote hyperglycemia and insulin intolerance. MSG may interact with aspartame to further impair glucose homeostasis. This may result in to diabetes.

A study has shown that chronic monosodium glutamate (MSG) intake causes kidney dysfunction and renal oxidative stress. This makes MSG harmful for kidney as it may cause various chronic kidney diseases including kidney damage and chronic kidney failure.

Intake of MSG may result into obesity or overweight and increases the risk of  type 2 diabetes mellitus.

Glutamate-induced toxicity to the cells partially mediated by enhanced oxidative stress and enhanced oxygen consumption. According to a study, glutamate induces mitochondrial dynamic imbalance and autophagy activation that can be prevented with selenium.

Hypothalamic obesity (HO), or intractable weight gain after hypothalamic damage, is one of the (HO) is a major and unsolved problem. Such patients gain weight even in response to caloric restriction, and attempts at lifestyle modification are useless to prevent or treat the obesity.  Early and intensive management is required to stave off the obesity and its consequences.

In another study, Monosodium glutamate induces insulin resistance and obesity.

In other study, Monosodium glutamate is used to induce severe hyperlipidemia , diabetes mellitus, metabolic syndrome and several complications of obesity in a rat model.

In animal study, Monosodium glutamate is used to induce obesity and fatty liver in an animal model.

Moreover, maternal obesity in pregnancy, caused by MSG, has greater impact on offspring metabolism and BW than that induced by HCC.

In a study, monosodium glutamate intoxication in infant nutrition is associated with obesity in the adult stage and chronic inflammation. MSG may also induce liver injury, contributing to inflammation and other problems like diabetes.

A study has shown that monosodium glutamate may contribute to neurological problems by affecting the gut-brain axis.

How to overcome MSG addiction or MSG side effect?

A study has shown that low dose of fish oil supplementation (1 g/kg/day) was able to reduce total cholesterol and triacylglycerol levels, in addition to improved systemic and muscle insulin sensitivity.

Another study has shown that adequate selenium supplementation may be an efficient strategy to prevent the detrimental glutamate or msg toxicity.

In another study findings demonstrated the preventive effect of fenugreek seed extract on fat deposition and dyslipidemia possibly by improvement in glucose and lipid metabolism.

Study has shown that intake of spirulina and liquorice root has a potential role in reversing cognitive dysfunctions associated with aging and obesity.