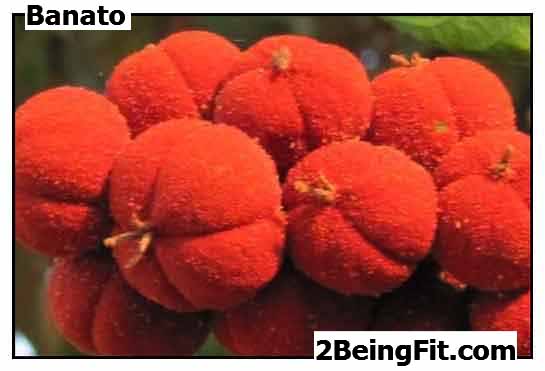 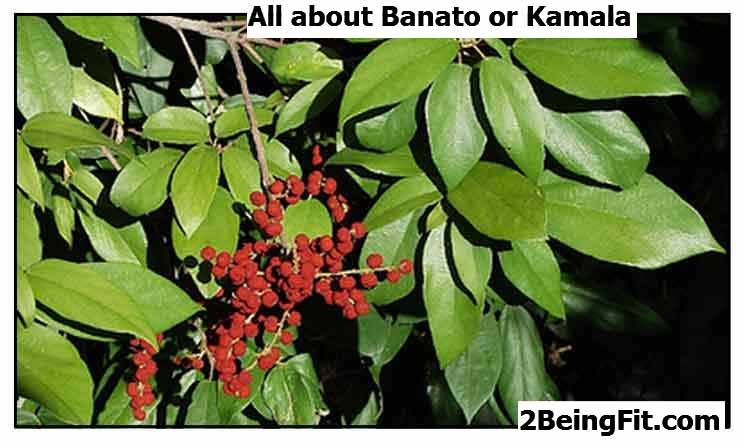 Kamala or Banato is a tree commonly found in thickets and secondary forests at low altitudes. It is Native to the Philippines. But also, widely distributed in India, Pakistan, Myanmar, China and Taiwan, Sri Lanka, Vietnam and Australia.

– An ethereal extract yielded three substances: a crystalline compound rottlerin, a wax, and a resin.

– Extract of kamala from the glands and hairs yielded a resin, a wax, and the crystalline compound rottlerin.

– The kamala resin yields the yellow rottlerin, the principle constituent, and also mallotoin and kamalin.

– The seed contains a fixed oil, camul oil and a bitter glucoside.

Medicinal Properties of kamala or banato

– According to Ayurveda, leaves are bitters, cooling and appetizer.

Uses
Folkloric traditional benefits and uses of kamala or banato

– The red glands of the fruit is antiherpetic and antihelmintic.

– Powder taken with milk for tapeworms, repeated as necessary.

– In India, bark decoction used for abdominal pain. Kernels are used as anthelmintic. Used in treatment of rheumatic diseases: Among the tribe of Chhota Nagpur, root is grounded and applied to painful articular rheumatism. In Burma, seeds are ground to a paste and applied to wounds and cuts. (18)

– In Pakistan, dried seed powder mixed with half cup of curd is given three times daily for 1 to 2 days for constipation and to kill intestinal worms. (28)

– In Manipur India, bark decoction with sugar given in urinary tract stone problem. (33)

– Dye: Powder obtained from the glands and hairs, besides its medicinal properties, was once valued as a dye; used for coloring silk and wool. Today, kamala is rarely used as a dye because of expense and competition of less expensive synthetic dyes. (18)

– Food coloring: Rottlerin and its derivatives are used for coloring foodstuffs, lemonades, lime juice, and other beverages. (18)

– Oil: Oil derived from the seeds is used in paints and varnishes, as hair-fixer, and ointment additive.

Scientific studies on health benefits and uses of banato or Kamala

The effect of aqueous and alcoholic extracts of the leaves of Mallotus philippensis was studied on the spontaneous movements of the whole worm and nerve-muscle preparation of Setaria cervic and on the survival of microfilariae in vitro. (3)

In an ethnopharmacological screening in Nepal, the bark from Mallotus philippensis was found to be active against gram-positive and gram-negative bacteria.

(2) Mallotus philippinensis was one of plants in a study of 61 Indian medicinal plants that exhibited antimicrobial properties, supporting its folkloric use as antimicrobial treatment for some diseases.

Hexane extract of roots of MP showed good anti-proliferation activity against HL-60 lines. The antineoplastic effect was believed to have been triggered by induction apoptosis through caspase-2 activation. (11)

Study isolated a potent bioactive alkaloid (MMH-1) from the root of M. philippensis. On antimicrobial testing, it was found to have medium activities on all six types of microorganisms. (14)

Approximate lethal dose of rottlerin in rat was 750 mg/kg. Extract was found lethal to trematodes; the alcoholic extract most effective in vitro and in vivo. (18)

Study of acetone extract of fruits for wound healing activity by excision model in experimental rats showed significant reduction in wound area with a high percentage of wound healing in a 10% (w/w) extract ointment treated animals. (24)

Study of hydroalcoholic bark extract showed antidiabetic activity in STZ induced diabetic rats. Results showed a significant increase in body weight and significant decrease in blood glucose and glycosylated hemoglobin. Effect may be due to the phenolics in the bark extract. (23)

Mallotus B is a prenylated dimeric phloroglucinol compound isolated from Mallotus philippensis, together with rottlerone, via intramolecular rearrangement of rottlerin. Mallotus B exhibited cytotoxicity for MIAPaCa-2 and HL-60 cells, and induced cell cycle arrest at the G1 phase and causes defective cell division, and induces apoptosis as evidenced by cell morphology. (27)

Antimicrobial testing of ethanolic and aqueous extracts of fruits showed antibacterial activity against selected gram positive and gram negative bacteria. There was strong activity against Pseudomonas aeruginosa, Escherichia coli and Staphylococcus aureus, without any response against S. dysenteriae, Streptococcus sp. and Bacillus subtilis. (30)

Study evaluated the anticestodal efficacy of M. philippinensis fruit extract in a rat cestodal (Hymenolepis diminuta) intestinal infection model. The extract at 800 mg/kg twice daily showed curative effect against mature adult worms, with dose-dependent decline in EPG (eggs per gram) count in the feces. The effect was may be attributed to the presence of phloroglucinol derivatives, chalcone derivatives and some glycosides. (31)

– Supplement formulations and seeds in the cybermarket.