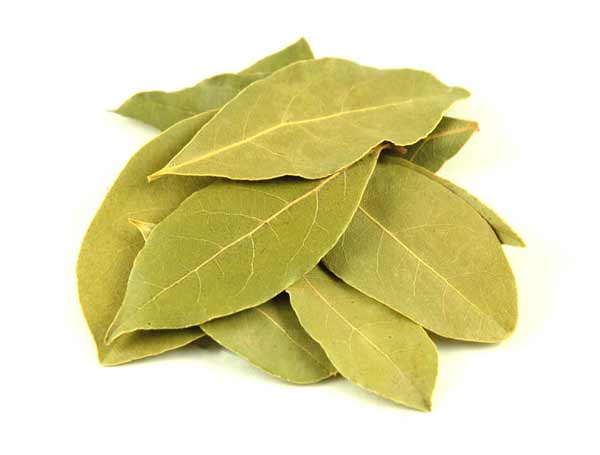 The leaves of Laurus noblis  are mainly used as a spice in cooking, and the essential oil obtained by steam distillation of the leaves is used as an additive in foods, drugs and cosmetics. Both fresh and tried bay leaves can be used for cooking. Good for heart and prevent diabetes

Studies has shown that consumption of bay leaves, 1 to 3 g/d for 30 days, decreases risk factors for diabetes and cardiovascular diseases and suggests that bay leaves may be beneficial for people with type 2 diabetes.

In a study, aromatherapy of volatile oils of bay leaf was conducted on vigilance performance in a visual discrimination task. The study suggest that bay leaf oil maintain a high level of vigilance performance, such as the rate of true hits by improving physiological arousal without incurring the detrimental performance effects of negative emotion.

Bay leaf can be useful in various vision disorders and vision fatigue problem.

Prevent from various toxins or toxicity

This makes bay leaf effective against Lipopolysaccharide-Induced Toxicity. Lipopolysaccharides (LPS), also known as lipoglycans and endotoxin they are found in the outer membrane of Gram-negative bacteria. The presence of endotoxins in blood can result into edotoxemia that damages endothelial layer of blood vessels, decrease in cardiac function, loss of function of certain internal organs such as the kidneys, adrenal glands and lungs due to compromised blood supply. LPS increases the risk of autoimmune diseases and are linked to obesity too.

Consuming bay leaf can help in all above problems as it inhibit that LPS.

For people who drink alcohol should include bay leaf in their diet as it is proven to inhibit absorption of alcohol and reduces the ill side effects on the health. There are many studies that confirm these facts few of them are below.

Study has shown that bay leaf contains compounds which inhibit the absorption of alcohol.

Another study has shown that bay leaf seeds have gastroprotective effects against ethanol induced gastric ulcer.

Bay leaf act as stomachic and carminative, which is useful in treatment and prevention of various gastric problems including gastric ulcers.
A study confirms that bay leaf extract has gastroprotective and antioxidant properties.

Good for nerve cells or neurons

Reactive oxygen species (ROS) are important mediators in many neurodegenerative diseases including Alzheimer’s disease and Parkinson’s disease.Bay leaf contains spirafolide, a compound that has neuroprotective effects against dopamine dysfunction. Dopamine is a neurotransmitter that plays a number of important roles in the human brain and body. The dysfunction of dopamine results into various nervous system disorders. Regular consumption of bay leaf helps to reduce the risk of many neurodegenerative disease including Alzheimer’s disease.

Bay leaf act as analgesics and aid in pain relief. It is effective in various inflammation diseases and pain management.
A study confirms that essential oil of bay leaf is comparable analgesic and anti-inflammatory effects to morphine and piroxicam, respectively.

There are many studies that confirms the fact that bay leaf helps fight and prevent cancer.

Bay leaf act as an antiviral agent which helps to protect against various viral infections.

A study has shown that bay leaf  exhibits antiviral properties against SARS-CoV and HSV-1 replication.

The free radical nitric oxide has emerged as a fundamental signaling device regulating virtually every critical cellular function, as well as a potent mediator of cellular damage in a wide range of conditions. Recent evidence indicates that most of the cytotoxicity attributed to nitric is rather due to peroxynitrite.

Consuming bay leaf regularly helps to protect the body from above health disorders.

Trypanosomiasis or sleeping sickness is a widespread tropical disease that can be fatal if not treated.It is spread by the bite of an infected tsetse fly (Glossina Genus). The tsetse fly bite erupts into a red sore and within a few weeks the person can experience fever, swollen lymph glands, aching muscles and joints, headaches and irritability. In advanced stages, the disease attacks the central nervous system, causing changes in personality, alteration of the biological clock (the circadian rhythm), confusion, slurred speech, seizures, and difficulty walking and talking. These problems can develop over many years in the Gambiense form and some months in the Rhodesiense form; if not treated, the person will die.

Bay life is rich in antioxidants and exhibits effective antibacterial activity. It helps to protect the body against oxidative stress damage and various bacterial infections.

Bay leaf has found useful against biofilm formation or resistance bacterial infections. Bay leaves contains compounds that has strong antibacterial activity not only against MRSA but also against vancomycin-resistant enterococci (VRE).

A study confirms that compounds isolated from Bay leaf have anti-MRSA activity.

Another study has shown that kaempferol glycosides purified from Bay leaf work synergistically with fluorioquinolones on MRSA.