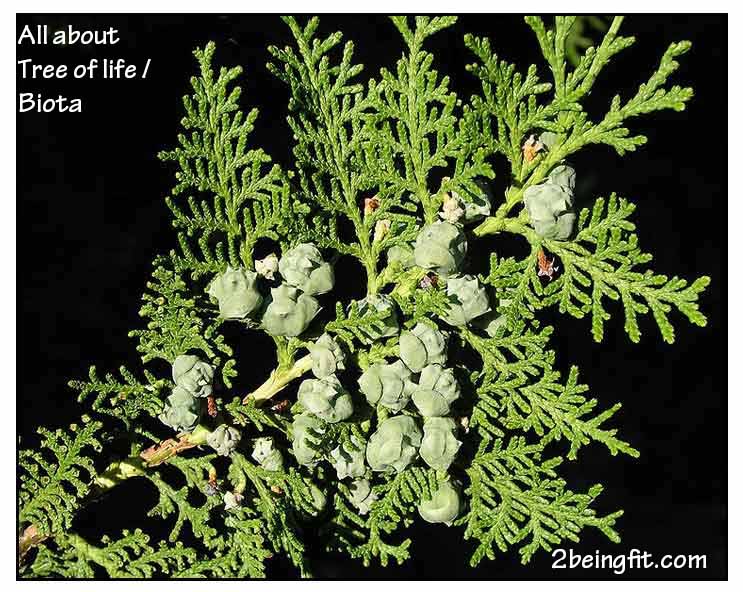 Name derives from Platycadus meaning “broad or flattened shoots” and orientalis referring to its native habitat, China. Arbor vitae is Latin for “tree of life.”

Oriental arbor-vitae is a small, slow growing tree, growing to a height of 15 to 20 meters, the trunk about 0.5 meters in diameter, up to 2 meters in very old trees. Stems are multiple. Bark is thin, reddish brown and peeling in longitudinal strips. Branches are ascending, ramified in a vertical plane. Leaves are decussately opposite, scale-like, 2 millimeters long, tightly appressed. Male cones are terminal, 2 to 3 millimeters long; female cones are axillary, oblong, 20 to 25 millimeters by 10 to 18 millimeters, with fleshy scales. Seeds are ovoid, flattened, 5 to 7 by 3 to 4 millimeters, and wingless. (9)

It is similar to Thuja occidentalis in general appearance, but has upright cones and thickened scales.

– Often planted as ornamental or as hedge plant.

– Defatted ethanol extract of leaves and fruits were rich in flavonoids and tannins.

– No reported folkloric medicinal use in the Philippines.

– In Reunion, used mainly as antirheumatic: cones crushed and soaked in alcohol for 2 to 3 days, and the extract rubbed on painful joints. Decoction of small branches used for varicose veins, hemorrhoids, and menopausal problems. Also used for fever and to treat gastric ulcers.

– In Mauritius, decoction of branches and leaves used for throat inflammation, fever, influenza.

– In Indo-China, ground leaves used as emmenagogue and antitussive; seeds as tonic, sedative, tranquilizer, and aphrodisiac. Decoction of twigs used for dysentery, skin infections, and cough. (9)

– In East Asia, Thuja orientalis has been traditionally used for baldness and hair loss.

– In Iran, used for pain and inflammation..

– Fragrance: Used as fragrance in the manufacture of cosmetics and soaps.

– Timber: Used for gateposts and furniture.

Study evaluated the essential oil of leaves and fruits from oriental arborvitae against adults of cowpea weevil (C. maculatus), rice weevil (S. oryzae) and red flour beetle (T. castaneum). Major component of both leaves and oils were α-pinene, α-cedrol, and Δ-3-carene. Results showed leaf oils were more toxic than fruit oils against the three species of insects. (4) Study was done on the fumigant toxicity of essential oils of leaves and fruits of P. orientalis against the adults of cigarette beetle, Lasioderma serricorne. Results showed fumigant toxicity with the leaf oil showing more toxicity than fruit oils. (see constituents above) (10)

Essential oil of fruits and leaves were tested for diuretic activity. Results showed an increase in urinary excretion, rise in sodium excretion, with hypokalemia. Oils of both leaves and fruit restored reduced levels of glutathione in alloxan-diabetic rats, showing antioxidant activity comparable to that of vitamin E.

Total flavonoids isolated from P. orientalis showed significant anti-inflammatory effect in inflammatory rat models induced by dimethylbenze and carrageenan. Activity was attributed to decreasing the content of PGE2 and NO.

Study showed the methylene chloride fraction of Thuja orientalis potentially inhibits biomarkers (LPS-induced iNOS, COX-2 protein, TNF–α and IL-6) related to inflammation in vivo and in vitro, and may be a potential candidate for the treatment of inflammatory diseases. (13)

Pinusolide, a labdane-tye diterpene, and pinusolidic acid have been isolated from leaf extracts. Pinusolide is a potent platelet-activating factor (PAF) antagonist. In mice, study suggested value in the treatment of hypotension and pinusolide analogues with a potential as PAF specific antagonist. (9)

Chloroform fractions and pure compounds were evaluated for their ability to inhabit pro-inflammatory enzymes in vitro, and production of TNF-α and nitric oxide lipopolysaccharide stimulated RAW 264.7 macrophages. Results showed anti-inflammatory activity probably through the inhibitory effects of the CHL and its components (hinokiol and acacetin) on 5-lipoxygenase. (14)

– Essential oils from leaves, seeds, cones and wood in the cybermarket.