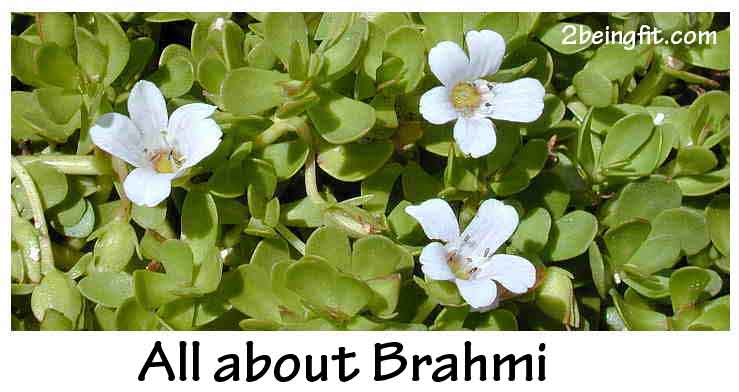 The scientific name of the Brahmi is  (Linn.) Wettst. It is also known as Baby tears, Brain plant, Herb of Grace, Moneywort, Monnier’s bacopa, Water hyssop, and White hyssop.

Brahmi  is a creeping, smooth, somewhat fleshy plant, with branches 5 to 20 centimeters long. Leaves are stalkless, entire, oblong-ovate to spatulate, 8 to 15 millimeters long, up to 4 millimeters wide, widest near the blunt tip, and tapering toward the base. Flowers are borne singly in the axils of the leaves, on stalks which are usually as long as the leaves or longer. Calyx is about 5 millimeters long, the outer sepal being oval and the others ovate-lanceolate or lanceolate. Corolla is 8 to 10 millimeters long; the tube, which is nearly as long as the calyx or quite as long, has white or pale violet lobes. Capsules are ovoid and shorter than the calyx. Seeds are numerous and pale.

– Plant yields the presence of a trace of oil matter, two resins, organic acid, tannin and an alkaloid principle.

– In the Philippines, decoction of entire plant utilized as diuretic.

– Hindu physicians use it as nervine tonic; used for insanity, epilepsy and hoarseness.

– Teaspoon of leaf juice used for vomiting and purging.

– In India, used as diuretic, aperient, and nervine tonic.

– In India and Pakistan, used as cardiac tonic, digestive aid, and to relieve bronchoconstriction.

Study results suggest only chronic administration of extract is associated with cognitive-enhancing effects.

Study on rat model with extract with 25% bacoside A showed an anxiolytic effect comparable to benzodiazepene anxiolytic drug, lorazepam.

Study showed Bacopa extract to have a relaxant effect on chemically-induced bronchoconstriction.

Animal and in vitro studies suggest a protective and curative effect on gastric ulcers.

A double-blind randomized, placebo-control study on 76 adults aged 40 to 65 showed a significant effect of Brahmi on a test for retention of new information, with decrease in rate of forgetting of newly acquired information.

Study of B. monniera extract on rat brain showed dose-related increases in SOD, CAT and GPX activities, suggesting a significant antioxidant effect after subchronic administration. The increase in oxidative free radical scavenging activity by BM may explain, in part, the cognitive-facilitating action noted in Ayurveda practice.

• Antifertility: Study in mice showed antifertility effects with reversible suppression of spermatogenesis and fertility without any apparent toxic effects.

A study in adult male Sprague Dawley rats on the antistress effect of bacosides of Brahmi showed B, monnieri has the potential to modulate the activities of Hsp70, P450 and SOD, to prepare the brain to act under adverse conditions such as stress.

Study showed the standardized extract of B. monniera possesses a potent adaptogenic effect.

Study showed the plant to be considerably tolerant to heavy metals, even accumulating trace quantities of these metals during growth. Analytical study showed considerable amounts of Al, As, Cd, Cr, Cu, Fe, Hg, Pb, etc. in different parts of the plant. Its use as ingredient in many Ayurvedic medicines and food supplements on one hand and bioaccumulation potential and phytoremediation efficacy are paradoxical.

In a randomized double-blind placebo-controlled designed study of 60 healthy elderly subjects, study showed B. monnieri can improved attention, cognitive processing, and working memory partly via the suppression of AChE activity.

A review concludes there is some evidence to suggest Bacopa improves memory free recall with evidence for enhancement in other cognitive abilities.

Study evaluated a hydroalcoholic extract of BM for antimotility and toxicological studies. Results showed an anti GIT motility effect which may be due to the presence of saponins, tannins, flavonoids and triterpenoids and may involve the interaction of the constituents with alpha 2 and GABA receptors.

• Protective Effect on Liver and Kidney Toxicity in Chronic Opioid Use:

Study in male albino rats of an ethanol extract of leaves and stems showed anticholinesterase Inhibitory properties. Results showed competitive inhibition in AChE in all brain regions studied. Results suggest a potential natural source of bioactive compounds that may be beneficial to the treatment of Alzheimer’s disease.

• Bacoside A and B / Effects on Cognitive and Emotional Deficits in an Animal Model of Dementia:

• Cardioprotective in a Diabetic Model:

B. monnieri exhibited significant myocardial salvaging effects in a model of chemically induced rats using streptozotocin (STZ). In addition, treatment was safe to vital organs with preservation of histopathological structures of hepatic, renal, and pancreatic tissues.

Study showed B.monnieri has an anti-amnesic effect, significantly reducing SOD activity. Its anti-amnesic effect that may vary depending on the amnesic agent used. However, the antioxidant mechanism may be central to evoking the memory enhancing effects of B. monniera against diazepam induced amnesia.

Wild-crafted.
Capsules, teas and extracts in the market.