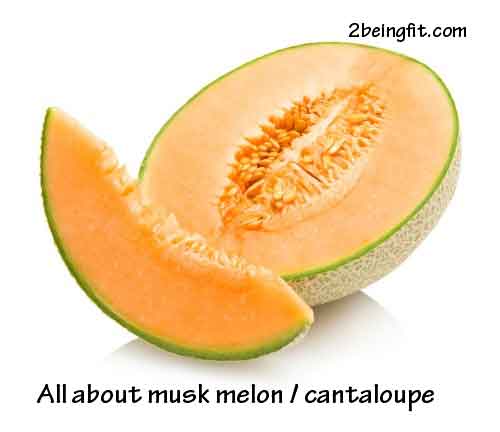 The scientific name of the musk melon or cantaloupe is Cucumis melo Linn. Other names include

– The native variety as a soft, white flesh, which is cut up, shredded, or mashed, and eaten or drunk with sugar.

– The other cultivated varieties have yellowish or pale-orange flesh, with firmer flesh, and with rough skins. These belong to the cantaloupe group.

– Seeds are salted, dried, and the kernels eaten as delicacy.

– Seed kernels are rich in protein and fat, used as dressing for cakes, bread, confectionery, sweet snack foods. Sometimes, it is used as substitute for almonds and pistachio.

– Source of edible oil with the nutritional value of melon seed oil.

– A good source of potassium, vitamin A, and folate.

– Root considered an effective emetic – one piece in 60 gm of lime water.

– Peduncles used for anasarca and indigestion. In Indo-China, it is employed to arrest vomiting.

– Fruit pulp used as a lotion for chronic and acute eczema; also used for removing tan and freckles; and internally, used for dyspepsia.

– Seeds yield a sweet, edible oil which is nutritive and diuretic, useful for painful discharges and suppression of the urine.

– Kernels prescribed for cancer of the stomach and for purulent problems of the digestive tract.

– Kernels used for menorrhagia, after the oil has been extracted.

– In Italy seeds are used as emollient and refreshing medicine.

Study of the stems of Cucumis melo isolated 21 cucurbitane-type triterpenoids, including 9 new compounds. Two known compounds, cucurbitacin B and cucurbitacin A showed significant cytotoxic activity against proliferation of A549/ATCC and BEL7402 cells in vitro.

The CM extract inhibited in a dose-dependent manner the production of superoxide anion, closely linked to superoxide dismutase activity. The anti-inflammatory activity of the extract was related to its capacity to induce the production of IL-10 by peritoneal macrophages. Also, animals supplemented with the CME/gliadin combination was protected against the pro-inflammatory properties of IFN-g.

Study of an aqueous extract of fruit pulp showed hydroxyl radical, superoxide radical, nitric oxide and DPPH activity. It was found to be cytotoxic dose-dependent and concentration-dependent effect against Erlich’s Ascites Carcinoma Cells.

Aflatoxins are the most important fungi toxin produced by Aspergillus flavus on animal feedstuff. Various extracts of mature and immature fruits of C. melo was studied for effect on fungi. Results showed an effect on A. flavus and suggest possible benefit of adding the extract to feedstuff for decreasing the growth of A. flavus, thus decreasing aflatoxin production. The ethanolic extract showed better antifungal effect than the methanolic one.