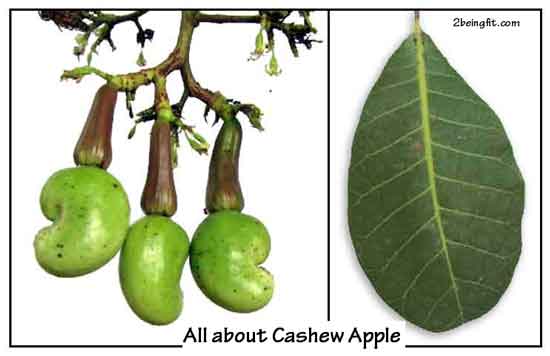 The scientific name of the cashew is Anacardium occidentale Linn. It is also know as cashew apple. Other names include

Cashew is a small tree with a usually small and crooked trunk. Leaves are simple, smooth, alternate, ovate or obovate, 10 to 20 centimeters long, 7 to 12 centimeters wide, with slightly rounded, emarginate apex. Flowers are small, 5 to 6 millimeters in diameter, crowded at the tips of the branches, and yellow to yellowish-white, the petals usually with pink stripes. The fruit, a nut, is ash-colored, kidney-shaped and about 2 centimeters long. The mesocarp is soft, corky, and oleoresinous; and the epicarp is leathery. Seed is kidney-shaped. Torus (receptacle) is fleshy, juicy, yellowish, pear-shaped, and 5 to 7 centimeters long. • Plant yields two oils: (1) a light-yellow oil from the pressed kernels, of which the finest quality is comparable to almond oil; and (2) Cardole, from the shell of the nut, an acrid and powerful fluid useful for preserving carved wood, books, etc. against white ants.

• Anacardic acids, the by-product of cashew processing, have medicinal uses.

• Kasuy is a very peculiar fruit consisting of two parts: Below, a large, soft, yellow, fleshy, juicy, pear-shaped structure which is derived mostly from the receptacle of the flower, edible, with the characteristics of a fleshy fruit, slight sweet, at times very acrid and irritating to the throat and tongue. Above, the kidney-shaped nut, the kernel of which has an excellent flavor when roasted.

• Fumes arising from the nuts during roasting may be irritating to the face, nostrils, and throat. The oil exuding from the nuts is very caustic and may cause skin brown marks like warts, swelling, and inflammation.

– Ripe fleshy portion of fruit may be eaten; sweet, although sometimes acrid and irritating to the throat and tongue. Often eaten with salt. Wine is made from it.

– The kernel has an excellent flavor when roasted, makes an savory candy nut and a popular snack food.

– Young leaves eaten as vegetable, a fair source of calcium and iron.

• Astringent and mouth wash: Gargle dilute infusion of bark and leaves and retain in mouth for a few minutes to relieve toothache, sore gums, or sore throat. Do not swallow.

• Receptacle boiled in sweetened water used by Filipinos as remedy for dysentery.

• Bruised nut used as irritant to cause abortion.

• Decoction of bark used for diarrhea, syphilitic swelling of the joints, and for diabetes.

• Bark, rich in gallic acid, used as decoction against aphthae and mouth ulcerations.

• Bark and leaves considered astringent; infusion used to relieve toothaches and sore gums, and as a lotion and mouthwash, also used internally for dysenteric conditions.

• Spirit distilled from the fruit is considered rubefacient. Used as diuretic.

• Oil from pericarp used as anesthetic in leprosy and psoriasis, and as a blister for warts, corns, and ulcers. Also applied to cracks in the feet. In the Philippines, oil used as a powerful escharotic and vesicant.

• Tincture of pericarp used as vermifuge in Europe.

• Kernel oil is a mechanical, as well as chemical, antidote for irritant poisons. Also, it is a good vehicle for liniments and other external applications.

• Oil from the kernel is nutritious and emollient; used as demulcent in form of an emulsion.

• Juice of receptacle is acid and astringent; used for uterine troubles and dropsy.

• In Guyana, decoction of bark used as antidiarrheal. Powdered seeds used as antivenom for snake bites. Nut oil used as antifungal and for healing cracked heels.

• In western Nigeria, used for arthritis and other inflammatory conditions. In some parts of Nigeria, bark used to treat diabetes.

• In Cameroon traditional medicine, used for diabetes and hypertension.

– Oil from the pericarp effective against white ants.

– Oil from the kernel is a chemical antidote for irritant poisons and a good vehicle for liniments and other external applications.

– The bark yields a gum that repels insects.

– Cardole, the oil from the shell of the nut, is effective for preserving wood, books; also, against white ants.

– Cardanol, from anacardic acid, is used for resins, coatings and frictional materials.

(2) In vitro study of different fractions of leaf extract of AO showed Staph aureus and P aeruginosa to be most sensitive to the chloroform extracts. (3)

Study confirmed the traditional claim of false fruit of Anacardium occidentale as an antimicrobial.

The experimental animal study showed AO extracts to possess hypoglycemic activity supporting its folkloric use. Although the mechanisms are highly speculative, the hypoglycemic effect of the plant extracts could be due, in part, to their terpenoid and/or coumarin contents.

Microstructural study of the effect of ethanolic extract of Cashew stem bark of Anacardium occidentale on the Brain and Kidney of Swiss albino mice showed no toxic effects with enhancement of functions and suggests a potential for its use in certain brain and kidney ailments.

Comparisons between the Antioxidant Activities of the Extracts of Anacardium occidentale and Piper betle: The methanolic extract of AO can be an alternative source of polyphenolics with potent antioxidant activities.

Study of leaf hexane extract of A. occidentale in mice showed no toxicity on acute administration with doses less than 6 g/kg. At high doses, signs of toxicity were asthenia, anorexia, diarrhea, and syncope. Liver and kidney parameters were significantly abnormal with correlating histopathological changes. Study concludes toxic effects of AO hexane leaf extract occurred at higher doses than those use in Cameroon folk medicine.

Study showed the efficacy of AO hexane extract in reducing diabetes-induced functional and histological alterations in the kidneys.

Cashew gum polysaccharide, combined with water soluble, branched b-galactose and other oligosaccharides and proteins exhibited an antitumor activity with a high inhibitory activity against an implanted sarcoma 180 solid tumor in mice.

Study suggested the aqueous extract of AO possessed antioxidative properties and attenuates the initial stage of atherogenesis in vitro possibly through inhibition of NF-kB activation.

Study evaluated the ability of A. occidentale bark extract to neutralize enzymatic and pharmacological effects induced by Vipera russelii venom. Results suggest it may be used as an alternative treatment to serum therapy and may also be a rich source of potential inhibitors of hydrolytic enzymes involved in several physiopathological diseases.

Study indicated the extracted mucilage may be a good source of a pharmaceutical adjuvant, specifically as a gelling agent.

Study in hypercholesterolemic rabbits evaluated the toxicity properties and hypocholesterolemic effects. Aqueous extract was found to be non-toxic and possess cholesterol-lowering effects.

Seed oil yielded saponins, alkaloids, flavonoids, steroids, and terpenoids.
The seed oil, test on male albino rats for sexual behavior, showed increase in mount and frequency of intromission, with decrease in mount latency. Results suggest the seed oil may be used to manage impotency in male humans. The seed shell oil, tested for toxicity, can be used to kill mice by application on foods eaten by mice.

• Differences in Constituents and Medicinal Properties of Different Extracts:

Folkloric use of herbals involves the use of plants without the isolation of particular phytochemicals, hoping for synergy of combined substances and dilution of toxicity, while modern pharmacy prefers single ingredients for dosage quantification, requiring detailed analysis of phytochemical constituents. In this study with guava, the highest concentration of bioactive principles were detected in ethanol extracts. The study justified the use of alcohol in folkloric extraction.

Study investigated the effects of a crude ethanolic extract of stem bark on renal clearance of Sprague Dawley rats. Results showed improvement of renal clearance on high dose of EAO. The study does not confirm or suggest the possible mechanisms of increased renal clearance.

Study of leaf extract in a diabetic rat model showed hypoglycemic activity. Observations suggest the extract could improve and protect the islet Langerhan cells from oxidative degeneration. The preventive effects may be due to inhibition of lipid peroxidation by its antioxidant properties.

Study evaluated the extract of A. occidentale against S. aureus and S. epidermis and then developed cosmetic formulations from those extracts. Although promising, the formulation gradually darkened when stored at temperatures between 40º and 60ºC.

Study evaluated the effect of a leaf extract of A. occidentale on reproductive outcome of Wistar rats. Study revealed low birth weight and low crown-rump length effect, suggesting serious implications with consumption of leaf extract during pregnancy. Low birth weight has a major influence on neonatal morbidity, neurocognitive deficiencies, neurobehavioral effects and mortality. The author warns that the extract should not be taken by pregnant women.

Study evaluated the inhibitory effect of a methanolic extract of leaf and bark of Anacardium occidentale against Staphylococcus aureus and Streptococcus mutans from burn and dental caries patients. The extracts inhibited all clinical isolates, and the leaf extract inhibited to a higher extent than the bark.

Study evaluated the protective effects of methanolic leaf extract on testes of STZ-induced diabetic rats. Results showed significant increases in levels of testosterone, FSH and LH. AOLE improved the structural integrity of the testes, promoted spermatogenesis, and improved the profile of reproductive hormones.

Study of methanolic extract in streptozotocin-induced diabetes in male Wistar rats showed reduction in hyperglycemia and regeneration of beta cells.

Study evaluated the antidepressant-like effects of Anacardium occidentale leaves in the mouse Forced Swim Test and Tail Suspension Tests. Results showed significantly decreased immobility periods in a dose dependent manner in both TST and FST. The antidepressant activity was probably mediated through interaction with adrenergic, dopaminergic, serotonergic and GABAergic systems.