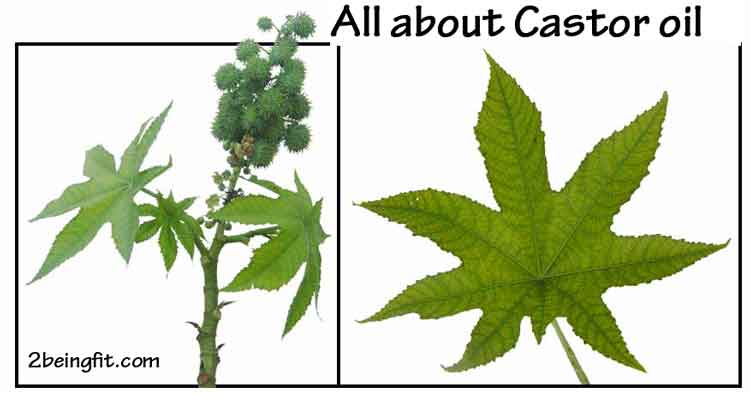 Castor oil plant is a coarse, erect, branched, smooth, somewhat woody bush, 1 to 4 meters high. Younger parts are glaucous, and the vegetative parts and inflorescence are green or purplish. Leaves are smooth, alternate, palmately-divided, and 20 to 60 centimeters in width, the lobes oblong and toothed. Racemes are stout and erect. Male flowers about 1 centimeter in diameter. Calyx is thin, splitting into 3 to 5 segments. Stamens are very numerous, filaments variously connate in branching clusters. Female flowers are calyx spathe-like, caducous. Ovary is 3-celled. Fruits are capsules, ovoid, 1 to 1.5 centimeters long, green or purplish and covered with soft spinelike processes.

· Roots, leaves, seeds.
· The leaves and seeds, externally; the oil, both internal and external.
· Collected year-round, but seeds are best collected from May to August. 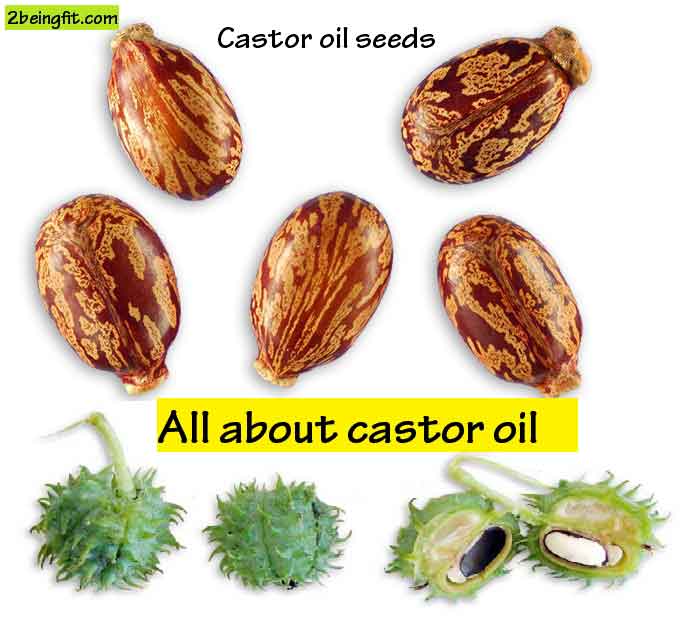 – Castor seeds is the source of castor oil, with its variety of uses.

-Seeds contain between 40% to 60% oil, rich in triglycerides, mainly ricinolein.

· Cooked with milk, leaves are used as poultices for certain kinds of ulcers.

· Root-bark is purgative; also used for skin diseases and burns.

· Lymph node TB; facial paralysis: poultice with pounded seeds (seed coat removed). If the paralytic side is on the left side of the face, apply poultice on the left.

· To increase the woman’s secretion of milk, leaves are pounded and applied over the breast as poultice.

· Decoction of leaves reported to act as lactagogue and emmenagogue when administered internally.

· Skin ulcers: Boil pounded leaves and use as wash.

· Bark of castor plant also sued as dressing for ulcers and sores.

· Seed paste applied to wounds and itch for 4-5 days.

· In Rhodesia, natives use the bark for dressing wounds and sores.

· Zulus use a paste of the root for toothaches; also, an infusion of leaves, applied orally or as an enema, for stomachaches.

· In French Guinea leaves are boiled and used as febrifuge.

· In Ayurveda, the leaf, root and seed oil used for inflammation and liver disorders.

· In China, crushed seeds used more frequently than the oil; a paste is applied to relieve scrofulous sores.

· Transvaal Sutos known to apply the powdered, roasted seeds to sores and boils in children.

· In Makran, oil used as ointment for sores.

· In Central Nigeria, seed variety is a popular contraceptive agent among the Rukaba women.

· Pulp is rubbed into the temples in headaches, into the palms of hands in palsy, into the urethra in stricture, and rubbed to the soles of feet of parturient women to hasten the birth of the child or to facilitate the expulsion of the placenta.

· Seeds are chewed in scrofula.

· Pulp is used for a variety of skin affections, dog bites, or whenever a lubricant is needed.

· Castor oil used as a mild purgative, adaptable to infants and young children. It is considered one of the most reliable cathartic for relief of obstinate constipation.

– Used as emmenagogue and galatagogue. Castor oil massaged over the breast after childbirth increases the flow of milk. (see study)

– In Sindh ethnobotany: (1) given in hot milk to induce labor pains (2) applied intravaginally for opening the uterus mouth at the time of delivery (3) used for expulsion of plasma membrane after delivery, and (4) castor beans are used to decrease the postpartum size of the abdomen. (see study)

• It is the source of the castor oil of commerce.

• Although best known for its medicinal properties for its use as a purgative, only a comparatively small amount of used for medicinal purposes. Its chief use is as lubricant for internal combustion engines, particularly aero-engines, for which it is suitable because of its high viscosity, retained at high temperatures, while non-solidifying at low temperatures.

• Castor oil is insoluble in light petroleum and other mineral oils. It can be used for making compound lubricating oil.

• Cosmetics: The seed oil of RC and its primary constituent, ricinoleic acid are used in the manufacture of skin-conditioning agents, as emulsion stabilizers and surfactants in cosmetics. In lipstick, castor oil is used at 81% concentration.

• Castor oil is also used in making “cognac oil,” in a dressing for leather, in “fat-liqouring” in the leather industry, in the manufacture of artificial leather, cutting oils, linoleum, and as wool oil.

• Also used in retouching-varnishes and in the negative varnishes of photography.

• Castor oil is classified by the FDA as GRAS (generally recognized as safe) and effective as a stimulant laxative.

• Contraceptive: Used in making contraceptive jellies and creams. Also, used with a pinch of alum for contraception. In women, one castor seed a month after the menstrual cycle reported to prevent conception for that month. (see study)

• Cake left after the castor oil is extracted from the kernels of castor seeds is used as fertilizer. In addition to its use as manure, it is also employed as fuel, for caulking timber, destroying white ants (termites) and other pests.

– Ricin: No part of the plant, except for the oil, is for internal use. The seeds contain Ricinin (C8H8O2N2) and Ricin has blood coagulating property and may cause poisoning if taken orally. Three seeds is enough to kill a child. Boiling the seeds for 2 hours or more removes the toxic principle.

– The cake left after castor oil is extracted from the kernels of castor seeds contain the poisonous constituent of the castor seed, ricin.

– Pomace: Pomace (castor bean dust), a product of castor oil factories, was reported to be a specific source of asthma among workers inhaling it, with the concern that exposures to pomace in large amounts may cause acute ricin poisoning.

– Castor bean dust has been considered a congestin, an anaphylactogenic.

Study of the methanolic extract of RC in Wistar albino rats showed significant radical scavenging activity and significant anti-inflammatory activity in carrageenan-induced hind paw edema. The pharmacologic effects were attributed to the presence of phytochemicals like flavonoids, alkaloids and tannins.

Study showed R communis inhibited both the primary and secondary phases of adjuvant arthritis, but less than betamethasone.

Study of ethanol extracts of R communis in male rats showed a drastic reduction in sperm counts, alteration in motility, movement and morphology. These antifertility effect was reversible and without hepatotoxicity.

Study of ethanolic extract of roots of RC showed significant antihyperglycemic activity with a high margin of safety with not mortality. Results suggest a promising potential for a potent phytomedicine for diabetes.

Study of the leaf extract of EC showed significant protection against galactosamine-induced hepatic damage. It showed marked choleretic activity and an anticholestatic effect against paracetamol-induced cholestasis.

A glycoprotein lectin from R communis was immobilized using concanavalin A. The immobilization technique could prove an important tool for the study of receptor hormone and antibody-antigen interactions.

The use castor bean-derived polyurethane tested for use in surgical reconstruction of bone tissue nasal deformities showed progressive bone formation and maturation, with no histological foreign body granuloma or phagocytic cell reaction. Macroscopic and microscopic results showed the castor oil polymer implant to be biocompatible with a favorable formulation with regards processing, flexibility, no emission of toxic vapors and low cost.

A study of the volatile extract from R communis leaves yielded three monoterpenoids: 1,8-cineole, camphor and alpha-pinene and a sesquiterpenoid, ß-caryophyllene. The leaf extract showed to be dose-dependently cytotoxic to several human tumor cell lines. Apoptosis was induced in SK-MEL-28 human melanoma cells. The results provide further insight into the potential use of naturally occurring terpenoids as inducers of apoptosis in cancer cells.

Methanol extract and total flavonoids fractions showed potent anti-inflammatory action in an acute model. The results of the ME at 500 mg/k and FF at 50 mg/k were at par with diclofenac sodium. Results showed RC leaves have anti-inflammatory potentials and flavonoids are dominant in the extract activity.

Study of Ricinus communis leaves powder against hepatosuppression induced by carbon tetrachloride showed a high potential in healing liver parenchyma and regeneration of liver cells. Results suggest a potential liver tonic for humans due to presence of large number of antioxidants.

Various extracts of roots, stems, and leaves were evaluated for antifungal properties against pathogenic microorganisms such as T. rubrum, Candida albicans, Microsporum spp. Some of the extracts showed varying effectiveness against the test pathogens.

Study evaluated the effect of decorticated and defatted castor seeds on the testis of male mice. Results showed significant decrease in the ration of weight of testis to body weight and levels of testosterone hormone. Histopathologically, there was severe changes in testicular architecture which was attributed to the cytotoxic activity of ricin.

• Intoxications in Human and Veterinary Medicine:

This review summarizes the knowledge on intended and unintended poisoning with ricin or castor seeds both in humans and animals, with particular emphasis on intoxication due to improperly detoxified castor bean meal and forensic analysis.

Study evaluated the inhibitory effect of different concentrations of Castor seed oil on growth of E. coli isolated from 52 male and female patients. The results showed an inhibitory effect. Effect was possibly attributed to the content of α-linoleic acid in the seed oil, higher than other fatty acids.

Study purified three toxic proteins and one agglutinin from the seeds of Ricinus communis. Ricin A is a newly isolated lectin with a strong inhibitory effect on the growth of tumor cells. The greater sensitivity of the tumor cells to lectin than non-transformed cells could be due to the higher binding affinity of lectin to tumor cells.

Formulation studies showed the 10% starch mucilage was the best binder for formulation of the granules, while 75% lactose was the best diluent for the drug. Administration of the dosage forms in rats exhibited significant contraceptive activity (80%).

Study evaluated the acute toxicity of whole plant powder of R. communis in the form of aqueous slurry on Swiss mice. Results showed no mortality even at the highest dose of 10g/kbw.

• Biodiesel: Study of local vegetable oil Ricinus communis as raw material for the production of biodiesel. Results showed RC oil can be used as biodiesel raw material with its high oil content and non-edible characteristics. However, pure RC biodiesel usage can cause problems in injection systems because of its high viscosity.