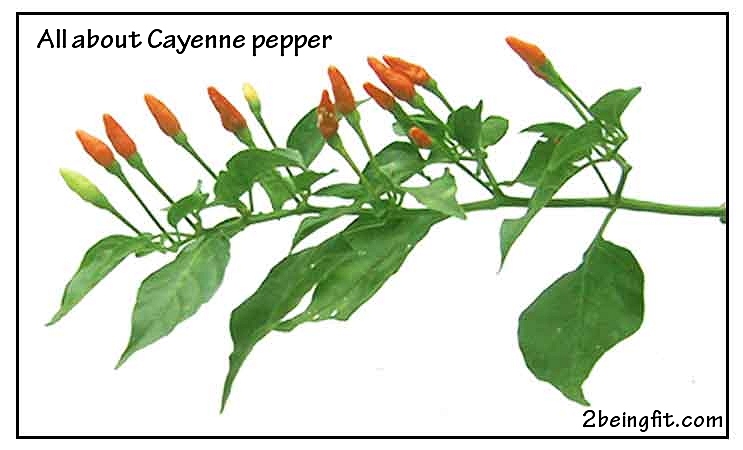 Cayenne pepper is an erect, branched and half-woody plant, growing to a height of 0.8 to 1.5 meters. Leaves are oblong-ovate to ovate-lanceolate, 3 to 10 centimeters long, and pointed at the tip. Flowers are solitary or several in each axil, stalked, pale green or yellowish-green, and 8 to 9 millimeters in diameter. Fruit is commonly red when ripe, oblong-lanceolate, 1.5 to 2.5 centimeters long. Seeds are numerous and discoid.

– Fruit is a popular condiment.

– Mixed with or made into pickles, and is a principle ingredient in Indian curries.

– The leaves are used as vegetable, with a very pleasant and somewhat piquant flavor.

– In Taiwan and the Batanes Islands, leaves used in soup.

– An excellent source of calcium and iron, a good source of phosphorus and vitamins A and B.

– Externally, a strong rubefacient that acts gently with no danger of vesication.

– Arthritis and rheumatism: Crush fruit, mix with oil and apply on affected part.

– Dyspepsia and flatulence: Eaten as condiment or drank as infusion as a stimulant and antispasmodic.

– Infusion of the fruit is stimulant, stomachic and antispasmodic; used for dyspepsia and flatulence.

– Infusion preparation: 3-10 grains every 2 hours to a cup of boiling water.

– Toothache: Juice of the pepper pressed into the tooth cavity.

– Fomentation of leaves and fruits applied to rheumatic pains.

– Leaves of some varieties used for dressing wounds and sores.

– Strong infusion of fruit of hotter varieties applied as lotion for ringworm of the scalp.

– Externally, used as rubefacient , and internally as stomachic.

– Chile vinegar, made from pouring hot vinegar upon the fruit, used as stomachic.

– As rubefacient, mixed with with 10 to 20% cotton-seed oil, applied as cataplasm or as liniment.

– Ancient Mayans used it for treatment of coughs, sore throat and coughs.

– In Jamica, used by traditional healers to treat diabetes mellitus.

Other uses of cayenne pepper

– In the Philippines, plant commonly used for dyeing in green shades.
– In Taiwan, used as ornaments and for rituals.

Procedure
– Macerate Cayenne pepper fruits in enough vegetable oil to cover the fruits.
– Keep jar covered.
– After one week, strain to separate the fruits from the oil. The macerated fruits may be discarded or leave the macerated mixture in the jar and just decant the oil as needed.
– If turbid, heat the oil gently at low temperatures (Do not boil) until the mixture becomes clear.
– Transfer to medicine bottles.

Capsaicin for medicinal use comes from Capsicum frutescens and is the active ingredient in the extract of hot peppers. It is most concentrated in the rib or membrane, less in the seeds, least in the flesh. Capsaicin depletes substance P in the afferent type C sensory nerve fibers, affecting only proprioception. Unlike other treatments for neuropathy, such as local anesthetics, opiates, anti-seizure medications or tricyclic antidepressants, capsaicin specifically treats pain without impairing other aspects of the nervous system. In incomplete depletion of substance P from suboptimal use, it may cause paradoxical increase of pain. (See: Capsaicin / DrugInteractions)

In a small trial in Italy (Dr. Mauro Bortolotti et al, University of Bologna), 30 patients with functional dyspepsia were randomized on daily capsules of 2.5 g of red pepper or placebo. The capsaicin content (trans-8-methyl-N-vanillyl-6-nonenamide) was 0.7 mg/g of red pepper power. After 3 weeks, upper gastrointestinal symptoms of epigastric pain, fullness, nausea and early satiety were all significantly reduced in the capsaicin group and not in the placebo group. The mechanism of action is believed to be the desensitization of gastric nociceptive C fibers, which carry pain sensations to the central nervous system. (see study )

Study showed a capsicum plaster preparation to have application in chronic non-specific back pain. (see study)

Study to demonstrate in vitro activity of capsaicin on metronidazole-susceptible and -resistant H pylori showed bactericidal effect even at lowest concentration (25 ug ml). Capsaicin. the active ingredient of hot pepper showed in vitro activity against H pylori and presents a possible alternative treatment strategy for antibiotic resistant strains of H pylori, a reasonable meal supplement for those with duodenal and gastric ulcer, and for developing countries, a cheaper alternative.(see study)

Study led to the extraction of the active principle, capsaicin. Results showed the capsaicin to be the major constituent of C frutescens that is responsible for the hypoglycemic episodes seen in dogs, an effect apparently mediated by insulin release. (see study)

The action of capsaicin is mediated by TPRV1 (vanilliod receptor) belonging to the ion channel group. TPRV1 has been found on pancreatic beta cells, and activated by capsaicin to increase insulin secretion. However, another study reported pure capsaicin activating glucagon secretion and increasing plasma glucose. At present, capsaicin glucose effects are still conflicting. (see study)

Phytochemical analysis of a methanol extract yielded saponins, tannins, alkaloids, glycosides and steroids. Study showed dose-dependent antibacterial and anthelmintic activity. Among the bacteria, Staph aureus was most susceptible, followed by K pneumonia and P aeruginosa. The anthelmintic effect al all concentrations was lesser when compared to standard. Results suggest the methanolic extract can be sued for bacterial and anthelmintic infections. (see study)

Study found 5 grams of capsicum provided capsaicin levels associated with a decrease in plasma glucose levels and the maintenance of insulin levels. Results suggest potential implications in the management of type 2 diabetes.

Study showed topical application of capsaicin as mouthwash proved itself as an alternative treatment for symptoms in patients with BMS (burning mouth syndrome). (see study)

• Effect on Glucose Absorption and Metabolism:

Study evaluated the mosquito repellency of distillates of fruits of C. frutescens and C. papaya. The extracts showed better repellency when combined. However, the repellency did not seem to be simply additive but rather a complex interaction of constituents of the mixture. (see study)

Study evaluated the insecticidal activity of different concentrations of methanol extract of fruits and leaves of C. frutescens against 2nd and 3rd instar larvae of Aedes aegypti. The fruit extract showed more killing effect than the leaf extract. The mortality of the larvae was found to be concentration dependent. (see study)

Capsaicin is available as fresh and dried peppers, and in many countries, in capsules, tablets, and tinctures and for external application in potencies ranging from 0.1% to 0.75%.