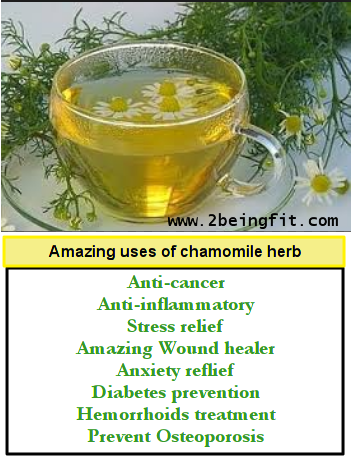 Chamomile is known as the calming herb which is commonly represented by these two common varieties viz. German Chamomile (Matricaria chamomilla) and Roman Chamomile (Chamaemelum nobile). Both of them are different species but use to cure same type of aliment. It is also known by Baboona, Sonbhal and Babunphul. The word chamomile comes from Greek meaning earth-apple on the ground. It is so called because of the apple-like scent of the plant.

Chamomile has been used for centuries as an anti-inflammatory, antioxidant, mild astringent and healing medicine.

Chamomile is widely used to treat inflammations of the skin and mucous membranes, and for various bacterial infections of the skin, oral cavity and gums, and respiratory tract.

Chamomile has been valued as a digestive relaxant and has been used to treat various gastrointestinal disturbances including flatulence, indigestion, diarrhea, anorexia, motion sickness, nausea, and vomiting Chamomile. It has also been used to treat cough, cold and fevers.

It has been used as a uterine tonic in women.

It is also effective in arthritis, back pain, bedsores and stomach cramps.

Aqueous solution of chamomile has been used as a mild sedative to calm nerves and reduce anxiety, to treat hysteria, nightmares, insomnia and other sleep problems.


Scientific evidence based uses of Chamomile

Animal studies has found that Chamomile has proved very effective for healing wound and in other study chamomile promote faster healing process than corticosteriods.

Chamomile exhibit excellent anti-inflammatory properties and can penetrate below the skin surface into the deeper skin layers.

Study has suggested that daily consumption of chamomile tea with meals could contribute to the prevention of the progress of hyperglycemia and diabetic complications. In other studies further reveal its protective effect on pancreatic beta cells in diminishing hyperglycemia-related oxidative stress.

Osteoporosis is a metabolic bone disease resulting from low bone mass due to excessive bone resorption. Sufferers are prone to bone fractures from relatively minor trauma. In a Study, Chamomile extract was shown to stimulate osteoblastic cell differentiation and to exhibit an anti-estrogenic effect, suggesting an estrogen receptor-related mechanism.

Recommended dosage of chamomile is about 2-4 gm.

Ways to use chamomile

Preparation of herbal tea made from dried flowers of chamomile contain many terpenoids and flavonoids contributing to its medicinal properties.

Make a paste out of chamomile flower with water and apply as poultice to inflamed skin.

Use of chamomile herb in prescribed amount is generally safe.
People suffering from asthma should avoid using chamomile.
Avoid taking it in large quantity as it may cause nausea, vomiting etc.
Allergy check is important as mostly people with allergy to asters, daisies, chrysanthemums or ragweed may be allergic to chamomile as they all belong to the same family.
Avoid using chamomile during pregnancy and lactation.
Avoid driving right after taking chamomile as it can cause drowsiness.
Women with family history of hormone sensitive cancer like breast or uterine should consult to their physician before taking it.
Always inform health physician about alternative medicine you consume regularly.

Chamomile is generally regarded as safe but it may cause adverse effect if taken in large dosage regularly. Consult your doctor first, if you are using any of the following medications.
Chamomile taken with any blood thinning medication i.e anti-coagulants and anti-platelets increases the risk of bleeding.
Using chamomile with any sedative drug or herbs make the effect stronger.
Using chamomile with blood pressure medication, diabetes medication, birth control pill, statins can cause adverse effect.