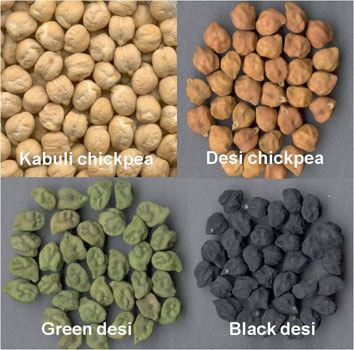 Chickpea is known as a plant that is rich in protein, carbohydrates, and nutrition, and its seeds and sprouts have been processed into various health foods such as promote bowel function, reduces high cholesterol, remove arteries blockages, helps to get rid of mid section visceral fat, detox the body and prevent diabetes.

The scientific name of chickpea is Cicer arietinum.

It is also known as  as gram, or Bengal gram, garbanzo or garbanzo bean and sometimes known as Egyptian pea, ceci, cece or chana or Kabuli Chana.

There are 3 types of chickpea seeds-

Green chickpeas are common in the state of Maharastra, India. In Marathi, they are called harbhara.

Black chickpea, ceci neri, is grown only in Apulia, in southeastern Italy. It is larger and darker than the desi variety.

It is low in Saturated Fat, and very low in Cholesterol and Sodium.

A study has indicated that diet supplemented with chickpeas has favorable effects on serum lipids, glucose tolerance, satiety level and bowel function.

Another study has shown that dietary supplementation with chickpeas for at least 5 weeks results in small but significant reductions in serum total and low-density lipoprotein cholesterols in adult women and men.

Chickpeas are good for arteries

Arteries are blood vessels that carry oxygen-rich blood to your heart and other parts of your body.Atherosclerosis is a disease in which plaque builds up inside your arteries that narrows and harden the arteries. Plaque is made up of fat, cholesterol, calcium, and other substances found in the blood. Atherosclerosis is the leading cause of heart attacks, stroke, and peripheral vascular disease.

According to studies, eating bengal gram or chickpea seed coat slows the development atherosclerosis due to the increased catabolism and excretion of cholesterol.

A study has shown that chickpea flour inhibits the formation of precancerous lesions , suggesting that they may reduce the risk for colon cancer incidence.

N-nitrosodiethylamine (NDEA) is one of the important carcinogenic nitrosamines frequently present in human environment and food chain that poses a significant human health hazard. A study has shown that chickpea seed coat fiber protects against n-nitrosodiethylamine-induced toxicity and protect the body against oxidative stress damage due to its antioxidant activity.

According to a study the dietary  intake of chickpeas reverses visceral adiposity, beneficial for correcting dyslipidaemia and preventing diabetes.

According to a clinical study, seed germination of chickpeas (i.e. sprouting) increases the levels of four main isoflavones in chickpeas, i.e., isoflavones, formononetin, biochanin A, ononin, and biochanin A-7-O-β-D-glucoside.

How to eat chickpea?