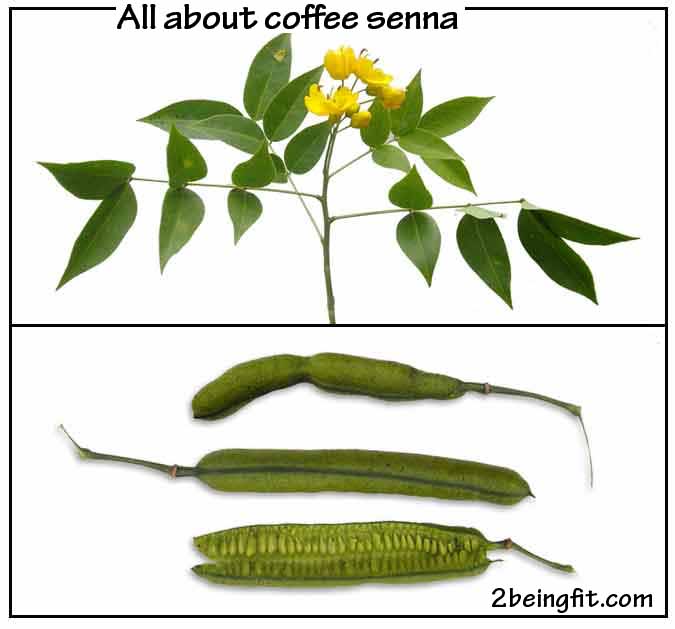 The scientific name of the coffee senna is Cassia occidentalis Linn.  It is also known as Coffeeweed, Antbush, Negro-coffee, Septic weed, and Stinking weed.

Coffee senna is an erect, somewhat branched, smooth, half-woody herb or shrubby plant, 0.8 to 1.5 meters high. Leaves are pinnate and about 20 centimeters long. Rachis has a large gland at the base. Leaflets are rank-smelling, occurring in 5 pairs, oblong-lanceolate, 4 to 9 centimeters long, and somewhat pointed at the base and tapering gradually to a fine, pointed tip. Flowers are yellow, 2 centimeters long, and borne on axillary and terminal racemes. Calyx tube is short, sepals imbricate; petals are 5, subequal. Stamens are 10, rarely all perfect, 3 to 5 being reduced to staminodes or sometimes absent; anthers mostly basifixed opening by terminal pores or with the slit more or less continued downward. Ovary is sessile or stalked. Fruits are pods, about 10 centimeters long, 9 millimeters wide, thickened and containing about 40 seeds.

– Throughout many countries at low and medium altitudes as a weed in waste places in and about towns.

• Oxymethylanthraquinone is isolated from the plant; traces of it from the leaf; 0.25% from the fruit; and 0.3% from the root.

– Seeds can be roasted and sometimes substituted for coffee.

– In Senegal and the Antilles, seeds used as a substitute for coffee.

– Leaves and flowers, cooked, are edible.

· Seeds used as emeto-cathartic. Also, employed as febrifuge, usually as an infusion in coffee.

· Ointment used for ringworm, eczema and variety of skin diseases.

· In Peru, decoction of roots used for fevers; seeds brewed for asthma.

· Infusion of roots and bark used for malaria and hematuria.

· Infusion of bark used for diabetes.

· Leaves used as purgative and antiherpetic.

· Poultice of leaves used for skin irritation and eczema.

· In Lagos, leaf infusion used as specific for black-water fever.

· In Lagos and Liberia, infusion of leaves used as purgative.

· In Dahomey, decoction of leaves used as febrifuge.

· In the Dutch Indies, poultice of leaves used for toothache.

· In the French colonies of western Africa, infusion of leaves used for yellow fever.

· In Malaya, poultice of leaves used for headache.

· In the West Indies, root used as diuretic.

· In Northern Nigeria, leaves used as a cure for hepatitis. (see study)

Antimicrobial screening of Cassia occidentalis L. in vivo and in vitro: Ethanol extracts of C. occidentalis and metabolite-rich fractions (anthraquinones, sennosides and flavonoids) of leaves, pods and flowers were tested against human pathogenic bacteria and fungi. The anthraquinones were found to be more active against E. coli and S. aureus.

An ethanol extract of leaves of Cassia occidentalis was evaluated for antihepatotoxic activity against carbon tetrachloride and thioacetamide as hepatotoxins.

Study of the aqueous extract of CO on its mutagenic potential against chromosomal aberrations showed antimutagenic activity by modulating the xenobiotic activation and detoxification mechanisms.

The antimalarial activity of C occidentalis has been confirmed. The plant showed more than 60% inhibition of parasite growth in vitro.

In a study of the extracts of 3 medicinal plants for antimalarial activity, M morindoides and P niruri showed 74 and 72% suppression, while C occidentalis was slightly less active at 60% chemosuppression of Plasmodium berghei in mice.

In an Argentinian study of 132 water extracts from 54 plant families, C occidentalis was one of those that showed greater antibacterial activity against Salmonella typhi.

In the rain forests and other tropical regions of South America, CO is considered a potent abortifacient. Results of this study showed no statistically significant difference between the control and treated groups in many of the observed parameters. However, there was the presence of dead fetuses registered in both doses of 250 and 500 mg/kg of CO. Further studies are needed and its use is not recommended in pregnancy.

Recurrent outbreaks of an acute encepalopathy illness to in India, earlier attributed to a viral encephalitis, were probably caused by the consumption of C. occidentalis beans with its phytotoxins. causing a multisystem disease – a hepatomyoencephalopathy syndrome. Public education has the potential to prevent future outbreaks.

Study showed the topical application of a methanol extract of C. occidentalis and a pure compound Chrysophanol, an anthraquinone derivative, promoted wound healing activity in excision, incision and dead space models in rats.

Study of the relaxant effects in rat aortic rings of an aqueous extract of the leaf of C occidentalis showed dose-dependent inhibition of contraction elicited by noradrenaline and potassium chloride. Results suggest the effect may be due to a direct relaxant effect and may justify its extensive use in folk medicine as an antihypertensive agent.

Ethanol and water extracts of Cassia occidentalis showed significant dose-dependent antinociceptive and antipyretic properties. Results provide a rationale for the use of the plant in pain and inflammatory disorders.

The seeds are a rich source of galactomannan gum and the gums derived from the seed endosperm can be used in industries to replace conventional gums. Study showed the carboxymethyl gum exhibited relatively high viscosity and stability.

Study suggests the aqueous extract of Senna occidentalis has a potential for typhoid fever treatment. However, AST, ALT, urea and creatinine levels suggest a side effect on the liver and kidney which warrant further investigation.

Study showed leaves of C. occidentalis stimulated healing of wounds induced by the dermal venom of Bothrops mooheni in mice, and can be considered an alternative treatment for snakebite wounds.

Crude extracts of various parts (leaf, seed, and pod) were examined for fungal activity against Candida albicans, Aspergillus clavatus and A. niger. Results showed as good or better activity than standard drugs Nystatin and Griseofulvin, except for the activity of leaf extracts against Aspergilli. Seeds exhibited the highest antifungal activity.

Study evaluated an ethanolic extract of leaves of Senna occidentalis for anti-trypanosomal activity in mice infected with T. brucei. Results showed the extracts possess trypanocidal properties and a potential source of a new trypanocidal agent.

Study investigated the in vitro and in vivo antitrypanosomal effects of an ethanol extract of Senna occidentalis leaves. Treatment of infected animals with extract significantly (p<0.05) prevented the trypanosome-induced increase in biochemical indices, and significant (p<0.05) ameliorated associated hepatomegaly and splenomegaly.

Study evaluated the larvicidal activity of C. occidentalis against larvae of Culex quinquefasciatus. The larvae transmit parasites and pathogens of deadly diseases like filariasis, dengue, yellow fever, malaria, Japanese encephalitis, chikungunya. In this study, C. occidentalis exhibited a realistic mortality for larvae of filarial vector, and suggests a natural weapon for mosquito control.

Study evaluated roots of Cassia occidentalis for antimicrobial activity. Results showed antibacterial and antifungal activity. The activity showed more susceptibility to gram positive than gram negative bacteria in a concentration dependent manner. Extract was most effective against B. subtilis and least against Vibrio cholerae.

Study evaluated the antibacterial potential of leaf extracts of C. occidentalis against 11 gram-positive and 4 gram-negative bacterial isolates. The n-hexane and dichlormethane fractions of the plant extract exhibited appreciable antibacterial action against nine of the 15 bacterial isolates, comparing favorably with the standard antibiotic, streptomycin.

Poisonous when taken in considerable amounts by domesticated animals, known to cause deaths in cows, horses and goats. The seeds contain emodin, mucilage, proteins, tannic acid, fatty acids and essential oils. There are many anthraquinone derivatives and alkaloids in CO, and no single principle toxin has been identified. Toxicity seems to occur with seasonality, when the beans become palatable with the taste of raw edible beans.

Plant causes poisoning in different plant species. all parts are toxic, but with differing levels of toxicity. Most poisoning in animals come from pods and beans. In cattle, it is reported to cause severe muscle degeneration, liver degeneration and death. The toxic effects can be rapidly fatal.

• Risk of Poisoning in Children:

The beans may be an object of use in the games, playing house, play-cooking and accidental ingestions. Pica, an abnormal craving for food as a manifestation of disease or iron deficiency, can be a risk for poisoning in children. Case-fatality rate in acute severe poisoning is 75-80 percent in children.

In India, cases of acute encepalopathy were subsequently attributed to consumption of C. occidentalis beans causing a multisystem disease – a hepatomyoencephalopathy syndrome. Public education has the potential to prevent future outbreaks. (10)

The toxic effects in large animals, rodents and chickens are on skeletal muscle, liver, kidney and heart. Pathological findings are necrosis of skeletal muscle fibers and hepatic centrilobular necrosis; renal tubular necrosis is less frequent. Toxicity is attributed to various anthraquinones, derivatives and alkaloids. The clinical spectrum and histopath are similar in animals and children.

· Non-Toxicity in Acute and Subacute Testing / Stem and Leaf:

A preclinical safety evaluation of hydroalcoholic extract of C. occidentalis stem and leaf in in male and female Wistar rats did not show acute and subacute toxicity, suggesting safety for use by humans.

Study identified the key moieties in CO seeds and their cytotoxicity in rat primary hepatocytes and HepG2 cells. GC-MS analysis of different fractions of methanol extracts of seeds yielded five anthraquinones (AQs), viz. physcion, emodin, rhein, aloe-emodin, and chrysophanol. In cytotoxicity analysis of the AQs in rat primary hepatocytes and HepG2 cells, rhein showed to be the most toxic moiety. Study indicate AQ aglycones are responsible for producing toxicity, which may be associated with symptoms of hepatomyoencephalopathy in CO poisoning cases.

Study of fresh leaves in albino rats showed hypoproteinaemic effects, with increase in ALT, AST, and ALP, suggesting the leaves may be slightly toxic as a concoction for liver ailments.