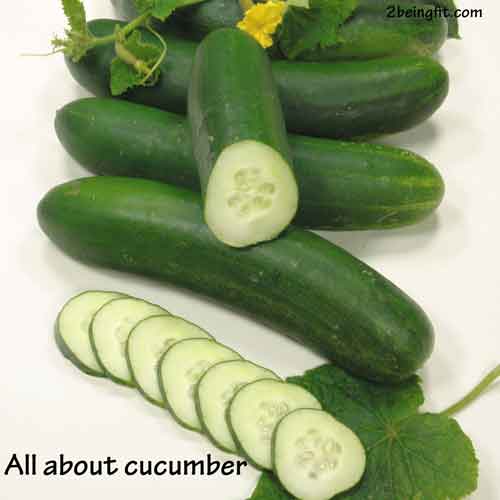 The scientific name of cucumber is Cucumis sativus. Other names include

– Study yielded two new megastigmanes from the leaves of C sativus – cucumegastigmanes I and II with other known compounds.

– Active ingredient of the essential oil is considered aphrodisiac in nature.

– Checkmate dehydrogenase from the pulp is considered a facial skin softener; also cooling and a natural sunscreen.

– A variety is used for making pickles.

– In Malaya, young leaves are eaten raw or steamed.

– Good source of calcium and iron, vitamins B and C.

– Juice of leaves used as an emetic in acute indigestion in children.

– Ripe, raw cucumbers said to be good for sprue.

– Bruised root applied to swelling from the wound of hedgehog quill.

– Seeds used as taeniacide (1 – 2 oz of seed thoroughly ground, with sugar, taken fasting, followed in 1-2 hours with a purge). Also used as an emetic with water.

– In Indo-China, immature fruit given to children for dysentery.

– In India, used as diuretic and for throat infections. Pulp considered healing and soothing, used to keep facial skin soft; is toning and soothing on damage skin and provides a natural sunscreen.

– In Bangladesh, fruit used with cumin seeds for throat infections.

– Cosmetic: Fruit is excellent for rubbing over the skin for softness and whiteness.

– Cooling, healing, and soothing to the skin irritated by the sun or raw from effects of eruptions

– Used in the manufacture of cucumber soap.

– Cucumber scent, one of a few others, linked to female sexual arousal.

In Mexico, one of the edible plants with hypoglycemic activity.

Antihyperglycemic effect of 12 edible plants was studied in healthy rabbits. Cucumis sativus significantly decreased the area under the glucose tolerance curve and the hyperglycemic peak. Study suggests the integration of a diet that includes edible plants with hypoglycemic activity.

Ethanolic extract of C sativus exhibited a potent activity against tapeworms comparable to the effect of piperazine citrate.

Six plants parts of C sativus were studied for its inhibitory effect on melanogenesis. Leaves and stems showed inhibition of melanin production. Of 8 compounds isolated, lutein was a potentially skin whitening component.

Study evaluated the safety of six ingredients from various extracts of Cucumis sativus (fruit, juice, seed) used in cosmetics as skin conditioning agents. The extracts were found safe in present practices of use and concentration.

Analysis of for proximate principles showed cucumber to be high in all nutritional content, with considerable amounts of proteins, carbohydrates, calcium, iron, phosphorus, vitamin C and crude fibers. Antimicrobial activity of aqueous extract of cucumber with and without peel against Salmonella typhi showed an MIC of 100%.

Study evaluated the effect of an aqueous extract of fruit of Cucumis sativus in acetic acid induced colitis in wistar rats. Results showed potent therapeutic value in the amelioration of experimental colitis in the animal model by inhibition of the inflammatory mediator.