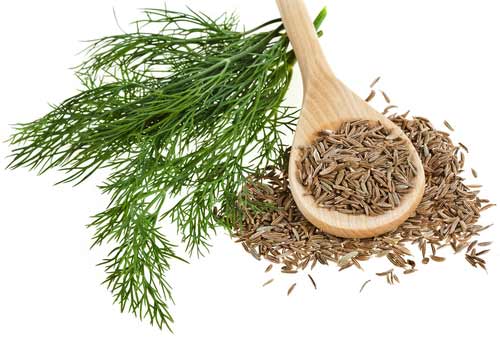 Cumin seeds has many medicinal uses and can be used as whole seeds or in powdered form. It is used in many cuisines as spice to add distinct aroma and flavor to the dishes.

A 100 gm of cumin seeds has about 375 calories. It is is low in Saturated Fat and Sodium, and very low in Cholesterol. It is also a good source of Dietary Fiber, Thiamin, Phosphorus, Potassium and Copper, and a very good source of Calcium, Iron, Magnesium and Manganese.
According to USDA, 1 cup of cumin seeds about 98 g of total weight has following nutritional value

Cumin helps to reduce weight and can be great help for obese people who want to loose weight naturally.

Studies has found that taking cumin for eight weeks among overweight subjects had the same effects of orlistat120 on weight and BMI but with beneficial effects on insulin metabolism.

Studies has shown that cumin and black pepper  are good for colon health and can prevent colon cancer.

Cumin has therapeutic effect on diabetes, helps to lower and control blood sugar in natural way.

Study has shown that cumin contains a compound cuminaldehyde which may contribute to this herb’s antidiabetic activity.

Another study has shown that cumin seeds has blood sugar lowering and anti-glycation properties supeior to the drug glibenclamide.

Cumin plant is rich in Phytoestrogens, which plays key role in estrogen-related disorders. Cumin significantly reduced urinary calcium excretion and significantly increased calcium content and mechanical strength of bones in comparison. It helps to protect the bones against aging and other bone related problem like osteoporosis.

A study provides study provides scientific support for the antistress, antioxidant, and memory-enhancing activities of cumin extract and substantiates that its traditional use as a culinary spice in foods is beneficial and scientific in combating stress and related disorders.

Cumin is one of the herbs and spices that are known to modulate the immune system and have been shown to restore the immunity in immuno-compromised individuals. It is an effective natural way to boost immunity, and useful in treatment and prevention of immune disorders like low immune function that can occur due to stress.

Study confirms that cumin is a potent immunomodulator and may develop as a lead to recover the immunity of immuno-compromised individuals.

Cumin seeds are good for eyes and helps to prevent various eye related disorders like cataract that can occur due to aging or clinical conditions like diabetes. People with diabetes should consider using cumin daily as it helps to delay eye related diabetic complications like cataract. Cumin has shown to play an important role in maintaining the transparency of the lens by preventing the aggregation/inactivation of several proteins and enzymes.

Study has proven that supplementation of cumin prevents glycation of the diabetic lens,  delayed progression and maturation cataracts.

Study has shown that cumin reduces morphine-induced conditioned place preference (CPP) which can be helpful for the people who are dependent on morphine for pain relief.

Another study has shown that the essential oil of Cumin attenuates the development of morphine tolerance and dependence.

There is a strong correlation between diet and cancer. Cumin seeds has shown chemo-preventive potential and has ability to modulate carcinogen metabolism.

High cholesterol or elevation of one or more fat proteins in the blood also known as Hyperlipidemia. Hyperlipidemia is an associated complication of diabetes mellitus and consuming cumin seeds helps in significant reduction in plasma and tissue cholesterol, phospholipids, free fatty acids and triglycerides.

Studies has shown that cumin seeds supplementation improves blood lipid profiles, blood sugar and glycation. It is found to be more effective than glibenclamide in the treatment of diabetes mellitus.

MRSA is a a contagious and antibiotic-resistant staph bacteria that leads to potentially dangerous infection.

Study has found that cinnamon, clove and cumin exhibit anti-MRSA properties, in vitro.

Cumin seeds and its oil has antibacterial properties against various bacterial infection including salmonella infection, E.coli infection and many more.

Studies has found that Coriander and cumin seed oil combination might be used as a potential source of safe and effective natural antimicrobial and antioxidant agent.

Klebsiella  is a type of Gram-negative bacteria that can cause different types of healthcare-associated infections, including pneumonia, bloodstream infections, wound or surgical site infections, and meningitis.

Study has proven that cumin has a broad range of antimicrobial activity.

Cumin has antifungal properties that helps to prevent and treat various fungal or yeast infections including skin fungal diseases and dermatophyte infections.

A study indicates that cumin has significant anti-fungal activity.

Study has shown that cumin has antioxidant, anti-fungal and anti-Vibrio activity, used as potent agents in food preservation and for therapeutic or nutraceutical industries.

Cumin has antibacterial and antimicrobial properties that helps to prevent food borne problems including food poisoning.

Cumin seeds helps to prevent the formation of dangerous blood clot which can cause heart attack or stroke. Cumin seeds has anti-platelet action that helps to treat various heart problems.

Cumin seeds are rich in oxidants that protects the body from free radical and oxidative stress damage.

Study has found that cumin, caraway, coriander, dill and fennel compare favorably to ascorbic acid for their antioxidant activity.

Cumin has antimicrobial activities and prevent biofilm-formation, which makes cumin useful in treatment and prevention of variious dental problems like dental caries, and gingivitis.

Study has shown that peppermint and to a lesser extent cumin essential oil compare favorably to the chemical chlorhexidine as anti-gingival dental plaque agents.

Cumin seeds can be used as whole or grounded. Add them into curries, stew, soups, gravies, pastries and pickles.

Make cumin tea by just boiling whole cumin seeds into water, and then enhance the flavor by adding fresh lemon juice with or without honey.

Cumin can be added to cheese.

Add cumin seeds to the bread batter while baking.