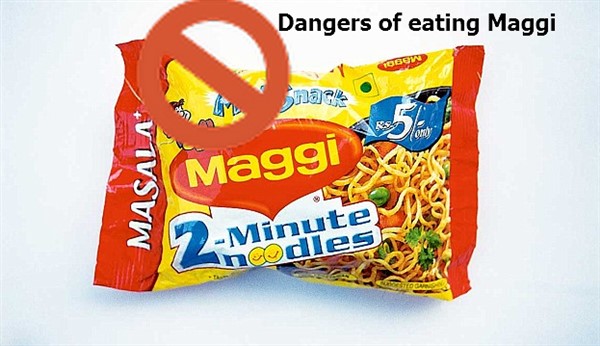 The laboratory tests in Kolkata, India confirmed presence of monosodium glutamate, or MSG, an excess of lead in Nestle’s instant noodles Maggi.

This article reviews impact of excess lead in food products like Maggie on human health. There is also the concern about undiscovered products and a necessity to impose ban on all such harmful food products.

Studies have repeatedly found that accumulation of heavy metal like lead increases the risk and growth of malignant tumor or cancer cells.

Increased levels of transition metals like lead is known to be closely related to the malignant growth process of breast cancer tissues.

In two studies, lead along with others are associated with production of lung cancer.

Lead has proven to be ‘neurotoxic’, which has adverse impact on brain development during childhood.

Studies  have found reduction of grey matter in brain, which is responsible for executive functions, mood regulation, and decision-making. Areas of lead-associated gray matter volume loss were much larger and more significant in men than women. In another study, early exposure of lead in childhood has lead to decreased intelligence, measure as I.Q

Few clinical studies have shown lead exposure as a risk factor for Amyotrophic lateral sclerosis (ALS) by increasing  mobilization of lead from bone into blood.

Studies have shown lead may contribute to the development of Autism.

In another study, children with autism showed significantly higher levels of mercury, lead and zinc in  their baby teeth than non autistic children.

A human case report, has shown the deficiency of micronutrients and a high burden of heavy metals like lead play a role in the development of multiple sclerosis.

Multiple sclerosis (MS), is an inflammatory disease in which the insulating covers of nerve cells in the brain and spinal cord are damaged. There is no known cure for multiple sclerosis.

In a human case report, Thrombocytosis may be linked to lead poisioning. Thrombocytosis is a condition in which body produces too many platelets, which is responsible for the blood clotting.

In a study, lead affects both immune and nervous system and may contribute to the development of nervous system diseases  such as multiple sclerosis, amyotrophic lateral sclerosis, and Alzheimer’s disease by stimulating the production of autoantibodies against neural proteins including myelin basic protein.

Lead along with other metals have been identified to have esterogenic properties. Esterogen is related to the human breast.

In other study, it may disrupt the normal function of endocrine system. Lead can act as xenoestrogens and can mimic the activity of endogenous estrogens, antagonize their interaction with estrogen receptors or disrupt the synthesis, metabolism and functions of endogenous female hormones.

In other in vitro study,  esterogen-like activity of metals like Lead can increase the breast cancer cells by 2- to 5-fold.

Lead has been referred as the tumor-inducing agent, which is one of the cause responsible for the majority of cancer deaths.