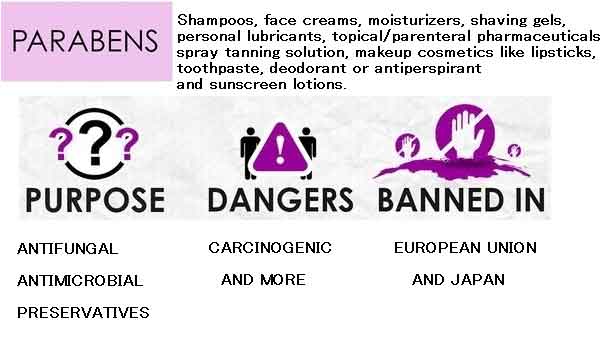 Parabens are commonly used as antifungal, antimicrobial, preservatives in cosmetics, pharmaceuticals, and food and beverage processing. It is linked to DNA damage, breast and uterine cancer, hormonal imbalance, infertility, toxicity, skin problems, allergies and negatively impact on reproductive system, brain and liver. Widespread human exposure to parabens has been recently documented for many disadvantages, risks and dangers on overall health.

Dangers, risk or disadvantages of parabens on human health

Parabens can cause DNA damage, increases the risk of infertility and overall toxic to genes.

Studies has confirmed that 100% of male subjects tested had measurable urinary concentrations of parabens, and concentrations correlate with DNA damage in sperm.

Another study indicate that endocrine disruptors, such as parabens, should be investigated as a possible contributor to increased incidence of breast cancer in women.

In vitro study has shown that combinations of parabens at concentrations measured in human breast tissue can increase proliferation of human breast cancer cells.

In another study, measurement of paraben concentrations in human breast tissue at serial locations across the breast from axilla to sternum. N-propylparaben was found at significantly higher levels in the axilla than mid or medial regions of human breast tissue.

Parabens increases the risk of Ovarian failure and infertility.

Studies suggest that Propyl-paraben may be associated with diminished ovarian reserve.

Another study has shown that exposure to butylparaben had an adverse effect on the secretion of testosterone and in the functions of the male reproductive system.

In a study, childhood chemical exposure to methyl, ethyl, propyl, and butyl parabens in a representative sample of persons >or= 6 years of age, that are related to parabens-associated toxicity.

Studies has shown that, isobutyl-paraben exposure during gestation has adverse effects on anxiety and learning abilities in offspring, especially males, and into adulthood.

Another study has shown that maternal exposure to butyl paraben decreases sperm number and motility in offspring.

Study has indicate that occurrence of and dietary exposure to parabens in foodstuffs
from the United States . The EDI values of total parabens (calculated from the mean concentrations measured and the mean daily ingestion rates of food items) were 940, 879, 470, 273, and 307 ng/kg bw/day for infants, toddlers, children, teenagers, and adults, respectively.

Study has shown that Paraben causes an effect on the uterus in both immature and adult female.

Another study has confirmed that Propyl paraben has an adverse effect on the male reproductive system.

In commentary study suggest that Parabens may adversely effect mitochondrial function in the testes of men, interfering with their fertility.

Study has shown that Parabens may interfere with steroidogenesis. Steroidogenesis is refers to the biologic synthesis of steroid hormones as by the adrenal cortex, testes, and ovaries.

Attention deficit hyperactivity disorder (ADHD) is one of the most common childhood brain disorders and can continue through adolescence and adulthood. Symptoms include difficulty staying focused and paying attention, difficulty controlling behavior, and hyperactivity (over-activity). These symptoms can make it difficult for a child with ADHD to succeed in school, get along with other children or adults, or finish tasks at home.

Study has shown that prolonged exposure to a low-dose of bisphenol A increases spontaneous motor activity.

Ultraviolet (UV) sunscreen products are popular because of concerns about UV radiation and skin cancer. Unfortunately, some of these products contain agents with estrogenic activity.

Another study has shown that various compounds used in sunscreens and musks have estrogenic activity.

Parabens can cause various skin problems, allergies including photo-aging. Study has shown that Methylparaben potentiates UV-induced damage of skin keratinocytes.

In Vitro Study has shown that Parabens are bad for liver cells and may cause chemically induced liver damage.

Checkout your household products and if it has parabens stop using them right away for better health.