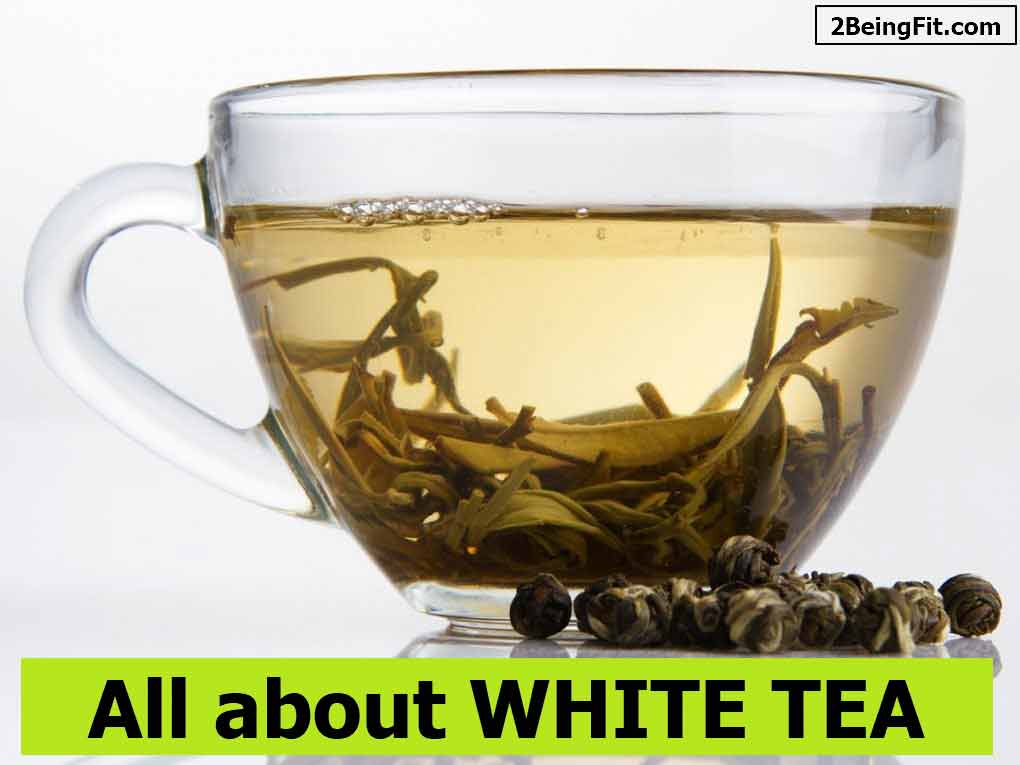 Some of health benefits of white tea include low risk of cancer, cardiovascular disorders, and promote oral health. It is rich in antioxidant and anti-aging properties which helps in protecting skin from harmful effects of UV rays. Thereby, maintaining good health and wrinkle-free skin. It has antibacterial properties, which helps to protects the body against many infection diseases.

Regular intake of white aid in weight loss. It is useful for people suffering from diabetes as it helps to decrease plasma glucose levels, increase insulin secretion, and excessive thirst (polydipsia).

White tea is originated from China and selected from different types of tea bushes. Itis considered as better alternative than coffee, which contains a high percentage of caffeine.

As, white tea undergoes the minimal processing, which helps in retaining high levels of phytochemicals compare to green tea and black tea.

What is white tea?

Tea which has not been processed in any way after drying is often called white tea.

The brewed white tea had mild flavor. One of the most popular white tea are the leaves of the Camellia sinensis plant.

It contains tannins, fluoride, and flavonoids such as catechins and polyphenols. These compounds are responsible for the various health and beauty benefits.

How to select and drink White Tea?

Best way is to get in the form of loose leaves. As, drinking brewed white tea from loose leaves guarantees the presence of nutrients in their actual form. In this way it is much better than tea bags that undergo processing.

The brewing process is similar to that of other types of tea.

Use pure or clean water for brewing. Avoid heating the water till boiling point. The water has to be enough hot but not boiling water. For a more concentrated strong white tea which is rich in flavor, steep it for longer than usual is recommended.

Daily intake of around 2 to 4 cups of this tea has many health benefits as compared to consumption of single cup.

The same tea leaves  can be reused to prepare more than one cup. But, in this case the brewing should be longer than the first one.

It contains polyphenols which help in neutralizing free radicals. Thus preventing our body from damage.

A study suggested that this tea may increase antioxidant effects of organs as well as plasma.

Presence of free radicals highly accelerated aging process, there by increasing the risks of other challenges associated with advancement in age. Drinking White tea daily reduces the risk of premature aging.

Regular intake of this tea helps in maintaining healthy and youthful skin. As, antioxidant found in this tea are strong and powerful that helps in quick repair and recovery of damaged skin. Along with that, it also protect skin against the harmful effects of ultraviolet light.

The presence of polyphenols, flavonoids, and tannins help in inhibiting the growth of various bacteria that may cause plaque formation.

The fluoride content found in this tea may also be effective in reducing the risk of dental caries or tooth decay/cavity.

Studies has confirmed that white tea may be beneficial in preventing cancer such as lung cancer.

In another research , found that this tea can act as potential anticancer, chemopreventive agent and its extract may induce apoptosis (cell death) and may help in preventing new cell growth in lung cancer.

It has found that antimutagenic properties as well.

A research study suggests that intake of white tea may provide relief from symptoms such as excessive thirst (polydipsia), decreased plasma glucose levels, and an increased insulin secretion.

Study has found that flavonoids found in this tea helps to decrease risk of the cardiovascular disorders. These flavonoids help to decrease the blood pressure.

It also helps in treating dyslipidemia, endothelial function, and inhibits low-density lipoprotein oxidation. Consumption of this form of a tea, rich in flavonoids, may reduce the risk of various heart conditions.

There are many products such as hand soap, which use this tea as a key ingredient.

It is a good remedy for various common diseases. Intake of white tea provides relief to those suffering from flu and a common cold.

Studies suggest that intake of white tea may prevent adipogenesis, which is the process of formation of fat cells, and may control the life cycle of these fat cells called as adipocytes.

Is white tea good for you?

Yes, it is very good for you,

As it has about three times more antioxidants compare to other varieties of tea, such as green tea.

How much caffeine is present in white tea?

One 8oz cup of this tea has about 28 milligrams of caffeine. This is relatively low level in comparison to other caffeinated beverages, such as coffee or green tea.

For example, a cup of coffee averages about 95 milligrams of caffeine per cup, more than 3 times the amount in white tea. In other words, it can provide an energetic boost, but is not as addictive and doesn’t result in withdrawal symptoms.

How to make white tea?

Step1: Boil water in a pot

However, for best results, let the boiled water cool for 5-8 minutes or else the tea will become scalded and slightly astringent.

Once the water cools slightly, steep the white tea leaves for 7-10 minutes for optimal flavor. The longer you let the tea steep, the stronger the flavor becomes.

Where to buy white tea?

You can buy it from any grocery and natural health stores like Target and Walmart, as well as at independent herbalists, coffee and tea distributors, and farmers markets.