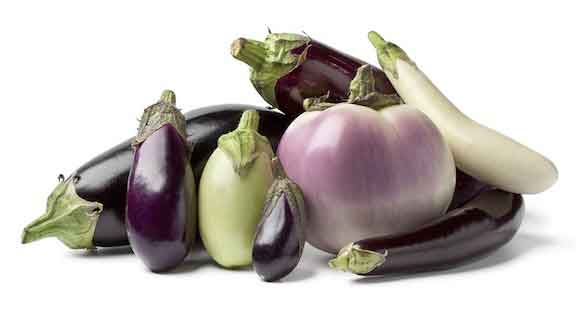 Some of the health benefits of eating eggplant or brinjal include useful in reducing high eye pressure and other eye problems, lower cholesterol, aid in weight loss, protects liver and heart, good for diabetic and hypertension patients.

The scientific name of eggplant is Solanum melongena. Other common english names include Brinjal, Garden egg, Melongene and Guinea squash.

A 100 gm of eggplant contains 24 calories. It is is very low in Saturated Fat, Cholesterol and Sodium. It is also a good source of Vitamin C, Vitamin K, Thiamin, Niacin, Vitamin B6, Pantothenic Acid, Magnesium, Phosphorus and Copper, and a very good source of Dietary Fiber, Folate, Potassium and Manganese.

Eggplant are good for eyes

According to a study, eggplant may have therapeutic value in the treatment of diseases of the eye involving high eye pressure also known as intraocular hypertension and convergence insufficiency. Convergence insufficiency include eye strain, double vision, headaches, blurred vision at near, eye fatigue, tension in and around the eyes, print moving on page, and frequent loss of place when reading. If, eye pressure is higher than normal and left untreated, can cause glaucoma and permanent vision loss in some individuals.

Consuming eggplant regularly helps to lower increased eye pressure and reduces eye strain, blur vision, eye fatigue,
headaches and tension in and around eyes. It helps to reduces the risk of glaucoma and many other eye diseases.So,  eating eggplant are good for eyes health.

A study finding has shown that flavanoids found in eggplant or brinjal has cholesterol lowering property.

Normal functions of endothelial cells include mediation of coagulation, platelet adhesion, immune function and control of volume and electrolyte content of the intravascular and extravascular spaces.

A study has shown that eggplant has hepatoprotective properties, which helps to protect the liver against toxicity, liver damage or other diseases.

In a study, eggplant, in both cooked and raw form, has cardioprotective properties, which helps to protect the heart from various cardiovascular diseases and promote good heart health.

According to study, cooked eggplant may have a higher antioxidant capacity than raw eggplant. Cooking process enhances the main phenolic compounds such as chlorogenic and caffeic acids, which are known to be antioxidants.
This also increases the free radical scavenging activity was significantly higher, especially that of superoxide anion in cooked eggplant.

This  suggest that thermal treatment commonly used before consumption can increase the content and biological activity of antioxidant compounds of eggplants.

Eggplant inhibit the spread of cancer to other parts of body

A study has shown that Delphinidin, a compound found within eggplant, inhbits the invasiveness of fibrosarcoma cells or  inhibition of tumor cell invasiveness.

Eggplant is good for diabets mellitus type 2 and hypertension patients

In a study, eggplant phenolics may inhibit key enzymes associated with the pathogenesis of type 2 diabetes and hypterension.

According to a study, nasunin, an antioxidant anthocyanin, in eggplant peels both antioxidant and antiangiogenic activities might be useful to prevent angiogenesis-related diseases.

Anti-Angiogenic refers to a substance used to stop the growth of tumors and progression of cancers by limiting the pathologic formation of new blood vessels (angiogenesis).

In a study, purified anthocyanin from eggplant helps to prevent mutations and reduces DNA damage which helps to improve health.

An animal study has shown the adverse effects eating eggplant in pregnant women (as it is associated with abortion or miscarriage and others) and in case of  breast cancer (or family history of  breast cancer).