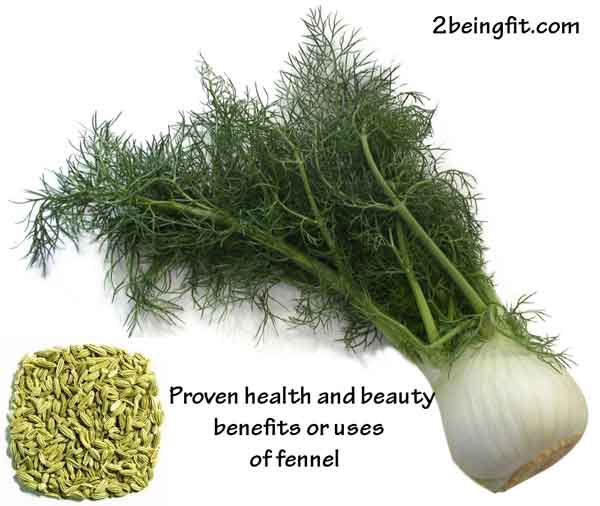 The scientific name of Fennel is Foeniculum vulgare Mill. Other names include

Raw fennel has a pronounced and distinct taste, close to anise or licorice. In olden times, fennel has been used both as an appetite suppressant and digestive aid, to counter witchcraft, as a culinary garnish, and varied medicinal uses. It is native to Europe, now widely cultivated in warm countries.

Botany
Fennel is a biennial plant with a thick rootstock, erect, much-branched, smooth, often 1 meter or more in height. Leaves are 2-, 3-, or 4-pinnate and about 20 centimeters long; the segments are filiform and 2 to 4 centimeters long. Umbels are 5 to 10 centimeters in diameter; the rays number 8 to 15, about 2 to 3 centimeters long, but longer in fruit, each with 20 to 30, pedicelled, yellow flowers. Fruit is ridged, very aromatic, oblong or ellipsoid, about 5 millimeters long. Seeds are somewhat dorsally compressed. – The fruit, seeds and young leaves are used for flavoring sweets, dishes and dainties.

– The young leaves, raw or cooked, used as flavoring.

– The seeds have an anise-like flavor.

– In the Philippines, infused fruit is carminative.

– Infusion of fruit used for flatulence.

– Shoots of young plant used as carminative and respiratory.

– Decoction is gargled as a breath freshener or applied as an eyewash.

– Used as diuretic and emmenagogue.

– Poultice has been used to relieve breast swelling in nursing mothers.

– Infusion of roots given for toothaches and postpartum pains.

– Hot infusion of roots given for amenorrhea

– Infusion of seeds used for flatulence in babies.

– Oil of seeds used for intestinal deworming in 3-4 ml doses.

– Paste of seeds or fruit used in cooling drinks for fevers.

– An ingredient of “gripe water” used for infantile colic.

– In Mexico, decoction is used as galactagogue.

– In Antilles, used as a stimulant.

Cosmetic or beauty benefits and uses of fennel

– Infusion of ground seeds as a steam facial.

– Used as mouthwash and toothpaste.

• Infusion: Pour a cup of boiling water into 1-2 tsp of crushed seeds; cover and infuse for 10 minutes. For flatulence, take a cup, half an hour before meals.

Mosquito repellent isolated from Foeniculum vulgare fruit: The fennel oil and E-9-octadecenoic acide are used as insect repellent components due to its lack of human toxicity.

Study results suggest Foeniculum vulgare extract can be effective in reducing the severity of dysmenorrhea.

Aqueous extract of Fv possess significant oculohypotensive activity, comparable to timolol. Further studies are warranted before Fv finds its place in the arsenal of antiglaucoma drugs.

Results of analysis of leaves and seeds of Fv showed the leaves contained higher concentrations of fat and flavonoids whereas the seeds were higher in saponins, protein, amino acids and other organic compounds.

The antioxidant potential of the herb might explain some of its empirical uses in folk medicine. The study found the shoots to have the highest radical-scavengiing activity and lipid-peroxidation capacity in agreement with the highest phenolic and ascorbic acid contents in this part. The shoots also showed a high concentration of tocopherols and were the only part plants found to have flavonoids.

F. vulgare essential oil, and its main component anethole, showed safe antithrombotic activity that may be due to its broad spectrum of antiplatelet activity, clot stabilizing effect and vasorelaxant action.

Study of root and schizocarp essential oils and diethyl ether extracts yielded 89 different components. The most abundant were phenylpropanoids (69.5-85.5%) and monoterpenoids (11.7 to 26.9%). Dominant volatile metabolites of the schizocarps were fenchone and (E)-anethole; the roots, terpinolene and dillapiole.

Because of inhibition of cytochrome P450 3A4 (CYP3A4), pharmacokinetic parameters of drugs metabolized by this isoenzyme may be affected. A significant interaction between ciprofloxacin and F. vulgaris has been demonstrated. Also, because of estrogenic effect, use during pregnancy is not advised.

Study of fennel extracts showed it can decrease the serum level of oxidative factors in female mice and can be introduced as a novel medicine for treatment of infertility.

A Randomized, placebo-controlled study evaluated the effectiveness of fennel seed oil emulsion in infantile colic. Results showed the use of fennel oil emulsion eliminated colic, according to the Wessel criteria, in 65% (40/62) of infants in the treatment group. No side effects were reported in the trial.

Study evaluated the effect of a hydroalcoholic extract on some hematological indices in male rats. Results showed increased red and white blood cells probably due to the presence of polyphenols and antioxidant activity and reduced negative effect of free radicals on blood cells.

Study showed the ethanol extract of ripe fruit contained ingredients that were active as diuretic, analgesic, antipyretic, antibacterial, and mitodepressive, with an active principle that enhanced bile flow.

A randomized, placebo-controlled clinical trial evaluated the effect of 3% fennel gel in decreasing hair thickness in idiopathic mild to moderate hirsutism. Results showed the 3% fennel gel was effective in treating idiopathic hirsutism and did not have notable side effects. The mechanism of action could be due to an anti-androgenic effect of trans-anethole and di-anethole.

Study evaluated the effect of F. vulgare extract on proliferation and osteogenesis progress in human mesenchymal stem cells. Results showed the extract has osteoprotective effects through a positive affect on cell proliferation and mineralization.