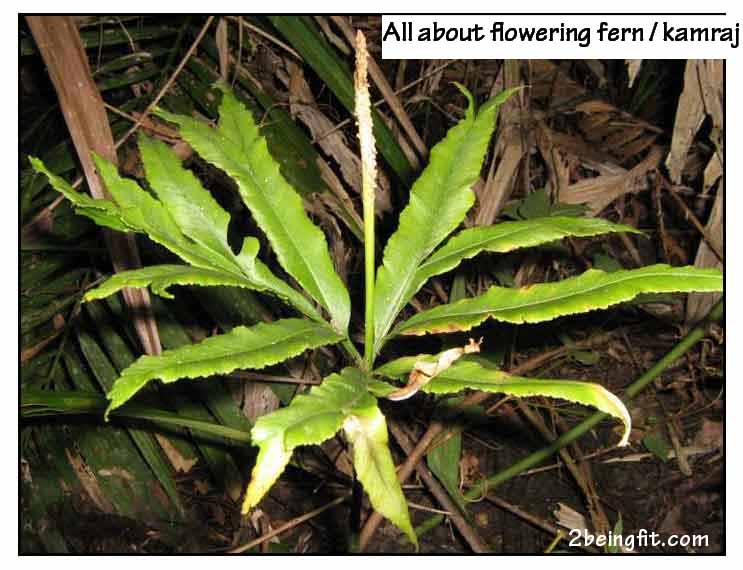 The scientific name of the flowering fern is Helminthostachys zeylanica (Linn.) Hook. It is also known as Kamraj. It is known as Ru di wu gong in Chinese.

Flowering fern or kamraj is a herbaceous stipitate fern, growing a foot or more in moist ground. Rhizomes are short, thick, and creeping, Stipes are erect, 15 to 30 centimeters long. Fronds grow singly from the underground rhizomes, and the appearance is characteristic. Leaf blade spreads out almost horizontally, resembling an umbrella, hence the common name. It has three segments, each of which may be divided into two to five parts. Ultimate segments are 7 to 15 centimeters long, and 2 to 4 centimeters wide, and lanceolate. Mature leaves have a spike, 7 to 20 centimeters long, that extends upward from the leaf stalk, roughly following the latter in length. Upper portion of the spike contains the spores.

– In open bushy places near sea level, in moist ground, especially along the banks of streams.

– New fronds usually initiated at the beginning of the rainy season.

· Wash and dry under the sun.

· Use rhizomes for propagation; preferably in shaded and moist area.

– Excellent source of phosphorus and iron; a fair source of calcium.

· For coughing due to tuberculosis, asthma, poisonous snakebites: boil 6 to 10 grams dried drug in a cup of water and drink the decoction.

· For snakebites: crush the fresh plant and poultice the wound.

· For fractures and bone strengthening.

· Rhizome is chewed with betel for whooping cough.

· In India, used in Kerala for the treatment of hepatic disorders; rhizome also used for curing impotency; rhizome is chewed with areca for whooping cough.

· In Bangladesh, Khagrachari tribe use the plant to stop hemorrhages. Decoction of rhizome used in impotency. In Bandarban, root juice used with other plants for treatment of jaundice. Leaf Juice used for tongue blisters.

· In China, rhizome is used as antipyretic and antiphlogistic.

· In Malaysia, rhizome used as a tonic. Decoction of leaves used as tonic after childbirth. Rhizome mixed with Piper betel for cough and venereal diseases.

· In the Moluccas, used to relieve constipation.

Study of ethanolic extracts of rhizomes of HZ showed significant hepatoprotective effect against CCl4-induced damage liver damage in rats and presents scientific rational for its folkloric use in liver diseases.

Study has isolated Ugonin K, a flavonoid from the rhizomes of H zeylanica. Results suggest ugonin K has neuroprotective activity through activation of ERK1/2 and PI3K?Akt signal pathways which protects against H2O2-induced apoptosis.

Administration of a methanol extract of H. zeylanica rhizome to male mice significantly stimulated the sexual behavior as shown by increase in number of mounts, mating and reproductive performance.

Eight flavonoids, ugonins E-L were isolated from the rhizomes of Helminthostachys zeylanica. Compounds 3-8 were evaluated for their antioxidative activity in a DPPH assay. Compounds 6,7 and 8 were more active than Trolox.

Three plants — Tacca integrifolia, Helminthostachys zeylanica, and Eurycoma longifolia. All three were cytotoxic to human cell lines, Hep2 and HFL1. A combined extract of E. longifolia and H. zeylanica was more cytotoxic than a single extract on Hep2 cell line. Study suggests there is higher toxicity risk of consuming combination of H. zeylanica with either T. integrifolia or E. longifolia, and products using these combinations should be avoided.

Study showed a potential anabolic effect of ugonin K on bone probably through activation of p38- and ERK-mediated Runx2 and osterix expressions to induce synthesis of osteoids and formation of bone nodule.