The scientific name of the fly amanita is Amanita muscaria Persoon. It is also known as Poisonous amanita,Fly agaric, and Soma.

The fatal mushroom poisoning of Count Achilles de Vecchj became the stimulus for disseminating information on mushroom identification. The Count died from eating Amanita muscaria, a toxic species not normally fatal. The investigation of the de Vecchj poisoning led to public advisories on edible and toxic mushrooms.

Amanita muscaria is a mushroom, with a bright yellow to orange or orange red cap, covered on the top with powdery scales, 10 to 18 centimeters in diameters. Gills are white. Stem is 10 to 19 centimeters high, white or tinged with yellow in color and is often scaly. Volva is white and prominent and surrounds the swollen end of the stem, but soon tears off.

Reported to grow in Baguio.

– Contains muscarine, with a melting point of 100 D.

– It contains biologically active agents, two of which are known to be psychoactive – muscimol and ibotenic acid.

– Muscarine is only a trace compound in fly agaric A. at varying doses, usually around 0.0003% fresh weight; muscimol is the pharmacologically more important compound. 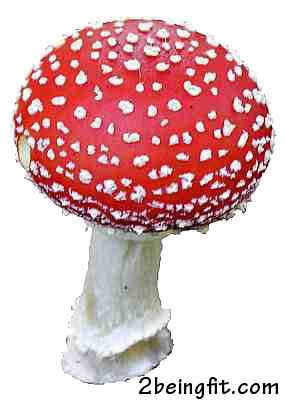 – Tobacco-like in odor, tasteless, and alkaline.

– Muscarine prolongs the diastolic action of the heart and acts as a vasomotor and respiratory depressant.

– Popular primarily for its hallucinogenic properties.

– Despite reported toxicity, the mushroom is a popular indulgence among groups seeking hallucinogenic culinary excursions. It is eaten raw, with varying side effects.

– Parboiling increases edibility, reported to remove most of the ibotenic and muscimol.

– Despite various detoxification recipes, toxicities and poisonings are still reported, often from skipping steps or not following detox procedures.

– Employed as remedy for epilepsy with little effect.

– Used in the treatment of night sweats of phthisis.

– Used by shamans for spiritual and physical healing.

– Extract of the deadly poisonous mushroom is used to poison flies in some countries.

– Used as an intoxicant and entheogen by Siberian tribes.

– Associated with Shamanic and magical rituals.

The complex pigment pattern of fly agaric was studied by LC-DAD and mass spectrometry. Among the betaxanthines the derivatives of serine, threonine, ethanolamine, alanine, Dopa, phenylalanine and tryptophan were reported to contribute to the pigment pattern. Betalamic acid, muscaflavin and seco-dopas were also reported. Pigment extracts were highly susceptible to degradation and rapid color loss.

Study evaluate the effects of muscimol on the EEG and spontaneous and conditioned behavior of cats, rabbits and rats. Muscimol-treated rabbits receiving small doses of diazepam and pentobarbital showed flaccid paralysis with an EEG patters similar to deep stages of anesthesia. In cats and rabbits, muscimol disrupted conditioned performance. The results are discussed in relation to the hallucinogenic and confusional effects of muscimol reported in man.

• It’s called many things: magic, sacred, or the herb of immortality, but it carries a risk of poisoning and toxicity.

• Poisoning is typically accidental, in young children or people mistaking it for edible species, or people ingesting it for the hallucinogenic experience. The white spots may be washed away by heavy rain and can then be mistaken for the edible specie, A. caesarea.

• The toxic dose in adults is approximately 6 mg muscimol or 30-60 mg ibotenic acid, the amount typically found in one cap of A. muscaria. Fifteen caps have been approximated to deliver a fatal dose; however, with region-to-region and season-to-season variations, it is an uncertain approximation.

• A fatal outcomes have been reported from ingestion of 6-10 freeze-dried muscaria caps. (see study)