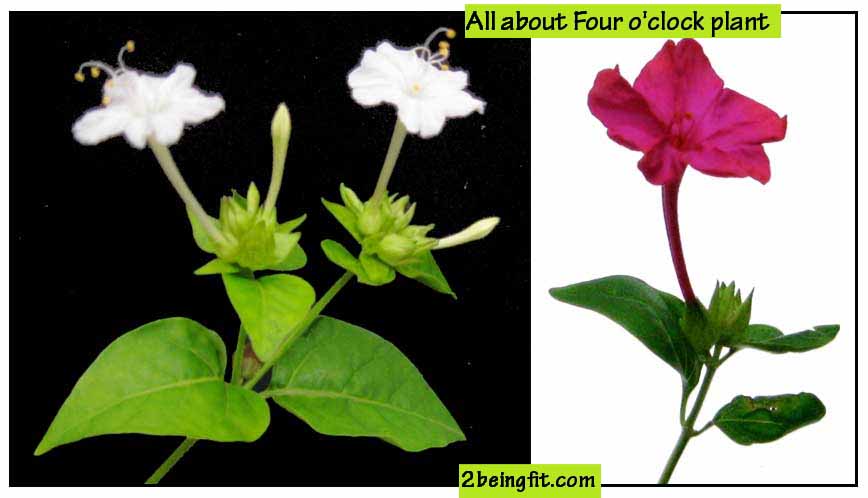 Four o’clock is an erect, nearly or quite smooth, branched plant, about 20 to 80 centimeters in height. Leaves are narrowly ovate, 4 to 10 centimeters long. Involucres are crowded, calyxlike, about 1 centimeter long or less, with one flower. Perianth is white, purple, or yellow, 3 to 4 centimeters long, with a cylindrical tube which is slightly enlarged and upward, and with a spreading limb. Fruit is narrowly ovoid, about 8 millimeters long, black and finely ribbed.

– Throughout the settled areas.

– Plant contains trigonelline, an alkaloid, that possess a purgative action.

– Tubers are weakly purgative and emetic.

– Root is believed to be aphrodisiac; also reported to be purgative, emetic and cathartic.

– Leaves are used as emergency food.

– Juice of leaves are soothing when applied to areas of urticaria.

– In India and Java bruised leaves used as poultices for boils and abscesses, and the juice used for uterine discharges.

– Infusion of leaves used as a diuretic and for dropsy.

– In China, used in traditional medicine in treatment of diabetes.

– In Brazil, Kayapo indians inhale the powdered dried flowers for headaches; the Assurani Indians grate the tuberous seeds and drink it for intestinal parasites. Poultice of leaves and flowers used for eczema, skin infections and itching.

– In South Africa, used as a purgative.

Edible crimson dye from flowers; used as colorant for cosmetics, cakes and jellies.

Extract of Mirabilis jalapa exhibits an inhibitory effect on gut smooth muscle contractility probably through a serotoninergic mechanism interacting with other adrenergic systems. (2)

(2) The methanol extract of MJ showed stronger and broader spectrum of microbial activity compared to other extracts, using amikacin as the standard bacterial agent.

(1) Study of protein fractions with ribosome-inactivating protein (RIP) properties from the leaves of MJ showed cytotoxic activity6 against a breast cancer cell line. (6)

Study isolated from the leaves of MJ, a 30 kD protein fraction named MI-30, with the properties of a ribosome-inactivating protein. It produced cytotoxic effect, more toward breast and cervical cancer cells as compared to normal mononuclear cells (12).

Study demonstrated antinociceptive activity in mice, supporting its folkloric use as an analgesic. (4)

Study showed significant antioxidant properties and a potential to serve as free radical inhibitor or scavenger. A methanolic extract showed a wide spectrum of inhibition against Gram+ and Gram- bacterial. (19)

• Natural Indicator in Acid Base Titration:

Study of flower extract showed potential use as an acid base indicator in different types of acid base titrations. (20)

Study showed white flowered plant of M. jalapa has strong antibacterial potential with activity against a wide range of microorganisms. (22)

In traditional use, the plant has been found to stop hemorrhages. Study showed a decrease in prothrombin time, decrease in activated partial thromboplastin time, and decrease in bleeding time. Results suggest M. jalapa is effective in blood disorders associated with increased bleeding. (23)

Study evaluated the effect of an ethanolic extract of flowers in formaldehyde and Freund’s adjuvant-induced arthritis in wistar rats. Results showed significant suppression of paw edema in both models suggesting significant anti-arthritic activity. (24)

Study showed a seed epicarp extract to possess strong antioxidant activity and suggests an inexpensive and potential source of natural antioxidants and pharmaceuticals. (26)

Study yielded four fractions of compounds from the extract roots which include boeravinone B, boeravinone E, and mirabijalone B. Compounds tested indicated important cytotoxic activity against cell lines tested. (27)

Study suggests Mirabilis jalapa flower, abundantly available, can be exploited as a good source of natural dye for wool and cotton dyeing, from olive green to brown depending on the choice of mordant. (30)

RIPs (ribosome inactivating proteins) have been isolated from plants. An RIP has N-glycosidase activity, which can modify large mRNA and inhibit further translation. MAB (Mirabilis Antiviral Protein), a type I RIP, is a frequently used RIP for medicinal purposes, isolated from roots, leaves, and seeds of M. jalapa. MAP exhibits a wide range of biologic activities viz. antiviral, anticancer and antibacterial. It is highly rigid, thermostable, and maintains antiviral activity at high temperature. (32)

Powders and other formulations in the market.