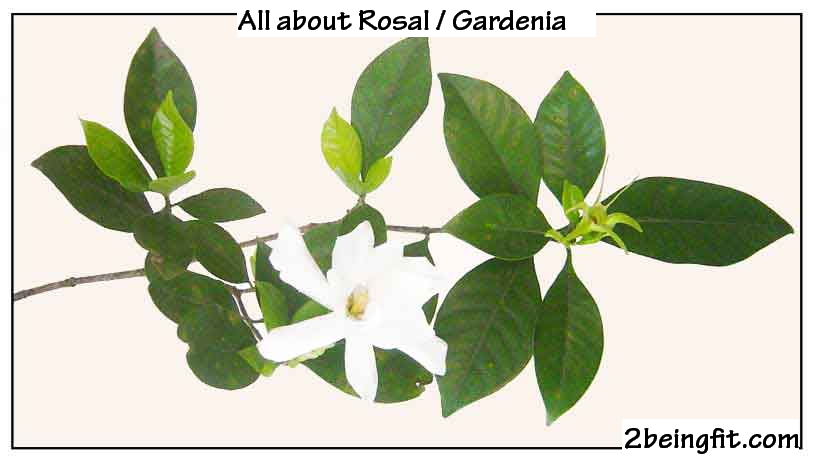 The scientific name of the gardenia is Gardenia jasminoides Ellis.

Rosal is a smooth, unarmed shrub 1 to 2 meters high. Leaves are opposite, elliptic-ovate, 2 to 6 centimeters long, narrowed and pointed at both ends, shining and short petioled, and stipulate. Flowers are large and very fragrant, occurring singly in the upper axil of the leaves. Calyx is green, with funnel-shaped tube and about 1.5 centimeters long, 5-angled, or winged and divided into linear lobes about as long as the tube. Corolla is usually double, white but soon turning yellowish, and 5 to 8 centimeters wide. Stamens are as many as the corolla lobes. Anthers are linear, sessile. Ovary is 1-celled, style stout, clavate, fusiform, or 2-cleft, ovules numerous on parietal placentae. Fruits are ovoid or ellipsoid, 2.5 to 4.5 centimeters long, 1.5 to 2 centimeters in diameter, yellow, with 5 to 9 longitudinal ridges. 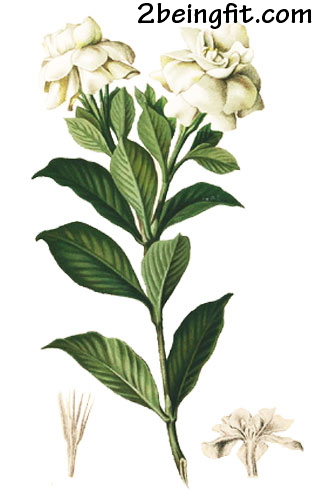 • Resinous exudation of the fruit yield two resins: gardenin, a crystalline resin of golden-yellow color, and another resin that is soft and of greenish color that acts as antiperiodic, cathartic, anthelmintic, alterative, and antispasmodic.

· Collect fruits during August to October. 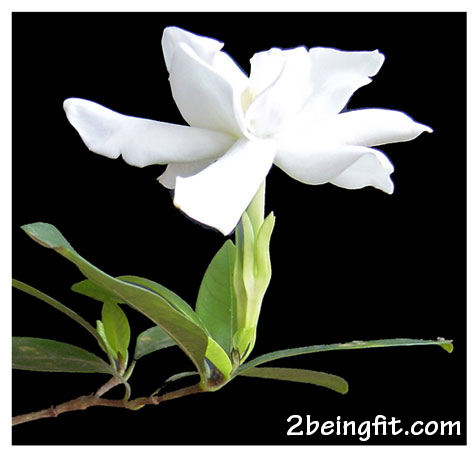 · In China, flowers are used to perfume tea.

· Roots used for fever with delirium.

· Decoction of roots used for flatulence, dyspepsia, and nervous disorders due to dentition.

· Decoction of bark used for menorrhagia and uterine problems.

· Decoction of flowers used as wash for inflamed eyes.

· Poultice of leaves for swollen breasts; may be mixed with violeta and other herbs.

· Decoction of bark of stems and branches used for intermittent fevers, dysentery, and abdominal pains. Also used as tonic.

· Fruits are pulverized and applied to regions with furuncle, sprains, lymph node tuberculosis with water or alcohol.

· Resin or paste made from the resin exudate of the fruit is applied to aching teeth, foul sores, and callous ulcers; also, to keep flies from the sores. Internally, used to expel worms. Resin also given for corpulence and to reduce the spleen.

· In China, extract used traditionally to treat diabetes. Also used for inflamed eyes, tumors, painful urination and hematuria. Infusion of lowers used as emollient and as an antiophthalmic. Fruit reportedly used as emetic, stimulant, and diuretic. Smaller fruit used for fever, fluxes, dropsies, lung disease, and jaundice; externally, for vulneraries. Pulp of larger fruit used as poultice applied to swellings and injuries, and to various ailments like wine-nose, dog-bite, slight burns and scalds.

· Malays consider it cooling. Poultice of leaves used for swollen breasts and headaches.

· In Oriental medicine, fruit has been used for inflammation, jaundice, headache, fever, liver disorders and hypertension.

In the Philippines, used in making wreaths, bouquets, etc. In the U.S., used for making corsages, only second to Cattleya.

In China, used to perfume tea and cosmetic preparations

Dye obtained from the yellow fruit. Dye is identical to the dye of madder (Rubia) and chay root (Oldenlandia), and in part, with the crocin characteristic of the Saffron Crocus. Dye used in Thailand for coloring cloth. In China, the dye is used as food coloring.

Scientific proven health benefits and uses of gardenia or rosal

Crocin is a water soluble carotenoid found in the fruits of gardenia (Gardenia jasminoides) and seems to possess moderately strong antioxidant activity.

• Antiangiogenic Activity/ substance used to stop the growth of tumors and progression of cancers by limiting the pathologic formation of new blood vessels :

The n-butanol fraction of the ethanol extract of gardenia fruit was found to be most effective in the antiangiogenic assay.

Study showed geniposide, an extract from Gardenia jasminoides, to be the its main choleretic principle. It also markedly decreased the content of cholesterol and elevate HCO3 concentration in bile without affecting the bilirubin and bile acid levels.

Crocetin is a pharmacologically active carotenoid compound of Gardenia jasminoides. In a double-blind, placebo-controlled, crossover trial of 21 healthy adult men with mild sleep complaints, study results showed that crocetin may contribute to improving the quality of sleep.

Empirical studies on the use of extract of G jasminoides in treating acute pancreatitis showed that GJ remarkably reduces the serum amylase and myeloperoxidase levels of both serum and pancreatic tissue as well as TNF-alpha and interleukin-6 while also reducing injury by oxygen-free radicals, NO and endoxins. GJ extract has been found to lower vasopermeability and inflammation, improve pancreatic hemodynamics and inhibit the release of pancreatic enzymes and other biotic active factors.

Study of extract of GJ showed inhibition of TNF-alpha-induced NF-kappaB activation, adhesion molecule expression and monocyte-endothelial interaction, suggesting an anti-inflammatory role of EGJ, which may be useful in preventing vascular disease, such as atherosclerosis.

Study investigated the effects of GJ extract and its constituents, ursolic acid and genipin on gastritis in rats and the growth of human gastric cancer cells. Results showed acid-neutralizing capacities, antioxidant activities, and inhibitory effects on H. pyloric growth. Also, there was cytotoxic activity against gastric cancer cells.

From the fruits, study yielded a new lignan glucoside, (+)-(7S,8R,8’R)-lyoniresinol 9-O-β-D-(6″-O-trans-sinapoyl)glucopyranoside, and a new iridoid glucoside, 10-O-trans-sinapoylgeniposide, together with eight known compounds, Some of the compounds were studied for short-term memory enhancement.

Pretreatment of mice with genoside resulted in marked reduction in inflammatory cells and total protein in the BAL fluid of mice. There was significant alteration of inflammatory mediators, Results showed geniposide may provide protective effects against LPS-induced acute lung injury through mitigation of inflammatory responses.

Study evaluated the anti-thrombotic effects of the aqueous extract of G. jasminoides in mouse and rat models of carrageenan-induced tail thrombosis and arteriovenous shunt thrombosis. Results showed GJ extract and geniposide demonstrated remarkable antithrombotic activities and supports its therapeutic use for thrombotic diseases.

• Genipin and Geniposide in Liver Diseases:

Study reviews the current findings on the application of geniposide and genipin in the treatment of liver diseases. Both compounds exert extensive beneficial effects to patients with liver disease. Geniposide is an iriodglyco compound isolated from the fruits; genipin is a metabolite of geniposide.