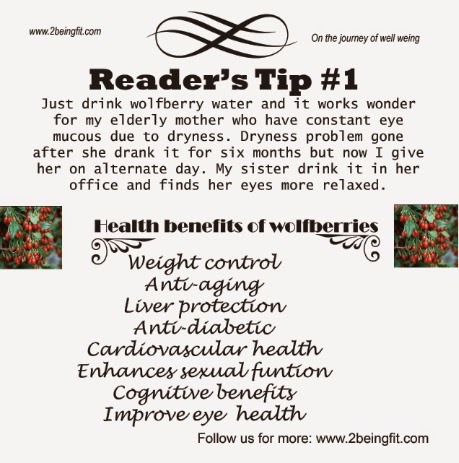 Some of the benefits of wolfberries or goji berries include relieving certain eye conditions, helps to lower cholesterol, aid against liver problems and kidney problems, reduces the risk of weak joints, anemia and premature aging.

Wolfberry or goji berry are extensively used in traditional Chinese medicine (TCM). It is believed that long term usage of wolf berry can help strengthening the body, prolonging life, and helps to maintain overall health.

From TCM point of view gojiberries nature is calm and flavor is sweet. The major benefits of gojiberreis are improving eye function, providing nourishment and toning to the liver and kidney.
The decoction made out of goji berries can be taken at a dose of 6–15 g, twice or thrice daily.

Using wolfberry in herbal teas can help to control weight. It can be combined with other herbs like chrysanthemum

Consumption of gojiberries with astragalus, ganoderma mushroom can help to keep skin looking younger and beautiful.

In a standard practice of TCM hot water extraction is done for wolfberry. The use of hot water allows the extraction of hydrophilic compounds, but most of the lipophilic components such as zeaxanthin dipalmitates, lipophilic vitamins, and other lipids are lost

Wolfberry exhibit an immune-enhancing effect due to the presence of zeaxanthin, a potent lipophilic antioxidant found in it.

TCM also indicated the use of wolf berry for preventing and alleviating diabetes.
Wolfberry may have therapeutic effects for treating diabetes comparable to chemical drugs without causing significant side effects during short- and long-term treatment of diabetic complications
Studies has showed that water extract of wolfberry has significant hypoglycemic effect.

The protective effects of wolfberry helps to prevent oxidative stress to the cardiovascular system.

Traditionally as well as there are some scientific evidence that wolfeberry can enhance sexual function.

There are some promising benefits of wolfberry for preventing neurodegenerative disease in the elderly and for protecting early brain development.

Recommended dosage as per TCM is between 10 to 15 gm daily.


Ways to include goji berries or wolf  berries in diet

Include sun dried goji berries and eat as healthy snack.

Wolfberry can be added to soups, hot pots and herbal teas.

For more potent result, make a smoothie with wolfberry,blueberry, raspberry with coconut milk.
In that way, we can benefit from both water-soluble as well as fat soluble bioactive present in wolfberry.

Wolfberry contains betaine, which is a known liver protector, but can also be used to induce menstruation and abortion, so its use should be avoided by pregnant women.

Chinese herbalists suggest abstaining from using wolfberry during times of cold and flu.

Wolfberry has an estrogen-mimicking effect so it should not be used by people who are pregnant or have diseases that are sensitive to estrogen. 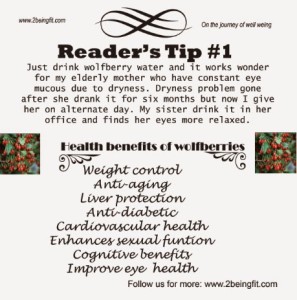 Just by drinking wolfberry has cured her elderly mother eye mucous problem which occurred due to eye dryness. The eye dryness problem has gone after she drank wolfberry water for six months and now she takes it on alternate day basis. Also, her sister drink this wolfberry water  in her office to relax her eyes.
(The identity is kept hidden on reader’s request.)
I would like to thank my reader for sharing this health tip, which will definitely help someone in need.