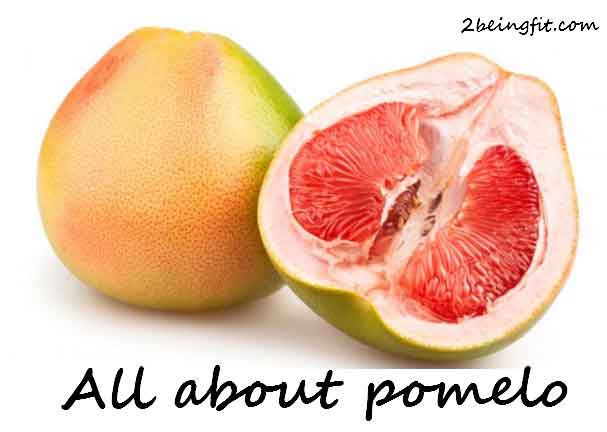 The scientific name of the Pomelo is Citrus decumana Linn. It is also known as Forbidden fruit, Grape-fruit, Pummelo, Shaddock, Pu tao you and Suha.

It is a small tree, 6 to 13 meters in height, with long, sharp, solitary spines. Leaflets are entire or nearly so, sparingly hairy beneath and on the margins, ovate-oblong to elliptic, and 8 to 12 centimeters long. Petioles are obovate and broadly winged. Flowers are white, fragrant, and crowded in short, axillary racemes. Fruit is large, obovoid to spherical, up to 20 centimeters in diameter. Rind is very thick and spongy, easily removed from the segments of the fruit. Pulp is pale yellow, pink or red, sweet or acrid, with large, distinct vesicles.

Many delicious pummelos have green skin while others have a burnt yellow appearance. The range of the fruit’s colorful exteriors means that the skin color should not be used as a baseline. Pick pummelos that feel heavy for their size, are firm, smooth and shiny. Avoid fruit with marks, coarse or wrinkly skin, and soft spots. The thinner rind fruits often contain the most flesh, especially those practically emitting citrus oil while in the hand. A good chakotra is also aromatic near the stem.

• Fresh fruit is a good source of vitamin B, iron and calcium.

• Phytochemical study of the peel of the grapefruit isolated five compounds: friedelin, b-sitosterol, limonin, cordialin B, and a previously unreported compound, 7(3′,7′,11′,14′-tetramethy)pentadec-2′,6′,10′-trienyloxycoumarin.

A 100 g of pummelo has about 38 calories. It contains the following nutritive values:

Pomelos have the taste of grapefruit without the bitterness and acidity, coupled with gorgeous floral overtones and a clean taste. The texture is fleshy and has more membrane than many other types of citrus; a bad pummelo is marked by dry, desiccated flesh with little juice. Of the three types of pomelos—pink, red and white—pinks and reds taste the sweetest, while white pummelos have a mildly acidic taste. To get the best tasting experience, ensure the pith is fully removed from every segment, as the pith adds a very bitter taste otherwise.

– Nausea and fainting: Squeeze rind near nostrils for patient to inhale.

– In the Philippines, leaves are used for aromatic baths.

– Infusion or decoction of flowers, leaves and pericarp used as sedative for nervous affections; also for coughs and ulcers.

– Peel or rind, dried or in decoction, used for dyspepsia.

– Boiled seeds in a gallon of water can be used for sitz-baths.

– In Malaya, lotion of boiled leaves used for painful swellings.

– In the Himalayas, fruit juice recommended for ulcers; used in diabetes; and mixed with black pepper and a little rock salt, used for malaria. Fruit juice with its pulp, with honey, is given to improve urinary flow.

-In Vietnam, the essential oils are used to make exfoliating scrubs and soaps.

Scientific proven evidence based health benefits and uses of grapefruit

• Interaction of with Cytochrome P450 Enzymes:

Study of the relationships of plant constituents and CYP450 enzymes, such as grapefruit with CYP2A6.

Study of alcoholic extract of the rind of Citrus decumana showed good in vitro anthelmintic activity against human Ascaris lumbricoides.

Study has shown that co-administration of Citrus grandis peels significantly decreased the systemic exposure of cyclosporin and resulted in higher macrophage and Th1 type activities than in mice treated with cyclosporin alone.

Study of active components attributed to the fragrance of the C. grandis flowers showed the buds and blossoms of the flower possessing a strong floral-, jasmine- and orange-like aroma contain B-myrcene, limonene, ocimene, linalool and caryophyllene as the major compounds.

Concerns have been reported on drug-grapefruit interactions because of the ability of grapefruit juice to inhibit the metabolism of some drugs. Grapefruit weakly inhibits the intestinal wall P-glycoprotein (p-GP), an efflux pump in enterocytes which is responsible for the intestinal secretion of many drugs. Another transport system affected by grapefruit is the OATP, organic anion transporting polypeptide; drugs handled by this system may suffer decreased absorption.

Grapefruit contains furanocoumarins, the most common are bergamottin and 6’7′-dihydrobergamottin which irreversibly inhibits cytochrome P450 3A4 isoenzymes in the intestinal wall, which may affect the metabolism of certain drugs consumed up to 72 hours of grapefruit consumption.

Find out the reason and who should avoid grapefruit.

The large pomelo fruit requires peeling through several layers to get to the juicy pink or pale yellow flesh. First, peel the thick, oily skin. Next, remove the cottony white pith and leave only the ball of fruit. While other citrus types only require peeling, pomelos have one last additional step: peel away the papery outer membrane encasing the flesh. Only the tear drop-like sacs of juice should remain.

Pomelos offer a pungent, zesty scent when peeled, so enjoy the fruit’s lingering fragrance that will aromatize the kitchen.

Pummelos are hardy fruits, lasting for two weeks at room temperature, and three to eight when placed inside of the fridge. Pummelos can be frozen as well: peel and de-pith the fruit, then place chunks of the fresh pomelo in a thick plastic bag and freeze. Expect the fruits to last for only a month—freezer burn sets in after 30 days. Some choose to place pomelo chunks in a syrup pack, made by boiling water and sugar. This syrupy concoction acts as a preservative and flavor enhancer, and will preserve the life of the fruit for up to a year.

– Add chopped pummelo to stir-fries vegetables, folding the fruit into the dish near the end of the cooking. Also add to salads, especially those that include peanut sauce.

-Make a citrusy sweet cocktail by blending pomelo chunks with ice and adding vodka. Or, strain the juice and add to a martini.

-Make a Thai pomelo salad by combining the fruit with red peppers, basil, cucumber, tofu, shallots, mint, and peanuts. Combine with a dressing made from peanut butter, coconut oil, soy sauce, and vinegar.

-Include pomelo chunks into European salads with beet, squash, avocado, walnut, vegan cheese, and a dark green like spinach or arugula.

-Make candied pomelo rind by peeling the skin and removing the bitter pith. Simmer the peel in sugar water for an hour and a half until the rinds are transluscent. Powder with sugar if desired, or leave to cool for two hours on a baker’s rack.

-Make pomelo lemonade by substituting this with lemon, and adding sugar as needed.

-Freeze the juice, and ice, and blend with sugar into a citrus sorbet. Garnish with mint.

-Juice pomelo with foods such as orange, carrot, ginger, and beetroot.