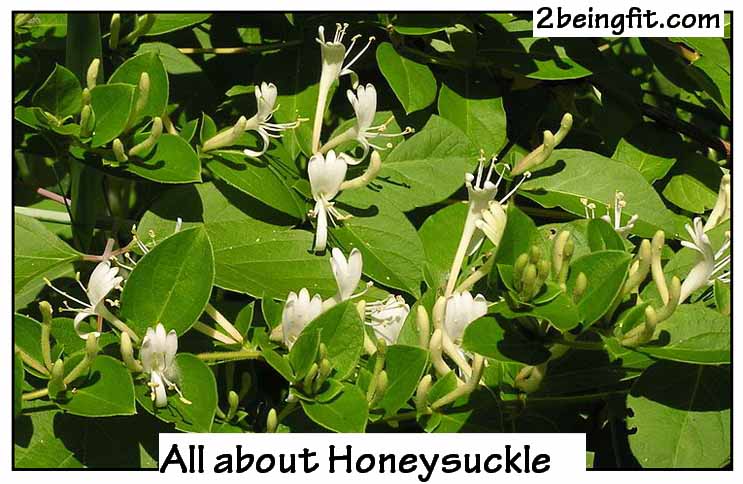 The scientific name of the honeysuckle is Lonicera japonica Thunb.

Japanese honeysuckle, an ornamental plant, is a hardy, low-climbing or trailing shrub, up to 5 meters or more in length. Leaves are oblong, oblong-ovate, or ovate, 3 to 6 centimeters long, 1.5 to 2.5 centimeters wide, pointed or blunt at the tip, blunt at the base and borne on short petioles. Flowers are tubular, 3 to 4 centimeters long, white, but turning yellow with age, borne in pairs in axils of the leaves on young shoots. Corolla is smooth, the tube slender and widening gradually, the limb has two lips, the upper lip broad, erect and divided into four-strap segments, and the lower lip having one linear-strap-shaped recurved segment. The berries are black.

– Ornamentally cultivated for its fragrant, attractive and profuse flowers.

• Volatile oils in the flower and stems were highly similar to each other â€“ palmitic acid and linoleic acid are the highest principles.

• Tea made from leaves, buds and flowers.

• In Chinese medicine, vine, flowers and leaves are used to increase vitality and lengthen life.

• Used for infections and poisoning.

• Infusion used in lotions for ulcers and abscesses.

• Flowers applied as wash for skin inflammations, rashes and sores.

• In Brazil, used as depurative and to facilitate childbirth.

Scientific studies on health benefits and uses of honeysuckle

The ethanol extract of leaves of Lonicera japonica showed no toxicity on hematologic, blood chemistry and gross and histopathologic parameters.

Luteolin, isolated from the flowers of Lonicera japonica, inhibited the induction of inflammatory cytokines, exerting a regulatory effect on mass cell-mediated inflammatory diseases, such as IBD, RA and allergy diseases.

Study showed L japonica to have obvious antipyretic effects on IL-1ÃŸ-induced febrile rabbits and acts by inhibiting expression of EP3 mRNA in the POAH.

Study for volatile oils in flowers and stems of Lonicera japonica yielded 36 constituents. Palmitic acid and linoleic acid are the highest principles.

L. japonica has been reported as a new Cd-hyperaccumulator. Study investigated he effect of Cd stress duration on growth, photosynthesis and mineral nutrition of L. japonica was investigated. Study showed L. japonica could be used for phytoremediation contaminated soils by Cd.

Non-alcoholic steatohepatitis (NASH) is characterized by fat accumulation in the hepatic tissue with varying degrees of inflammation and progressive fibrosis. Study evaluated the effect of an ethanol extract on mice fed with methionine-choline-deficient diet to promote the development of NASH. LJEE significantly reduced hepatic malondialdehyde level and ameliorated hepatic inflammation and fibrosis in MCDD-fed mice, which was associated with down-regulation of cytochrome P450 2E1 suppression of proinflammatory and profibrotic genes. Study showed a protective role for LJEE in ameliorating nutritional steatohepatitis.

Study evaluated the protective effects of caffeoylquinic acids (CQAs) from Jin Yin Hua against hydrogen peroxide (H2O2)-induced hypoxia and hypoxia-induced cytotoxicity using neonatal rat cardiomyocytes. Seven CQAs (C1-C7) were isolated. Results showed C4 and C6 protect cardiomyocytes from necrosis and apoptosis during H2O2-induced injury, via inhibition of the generation of ROS and activation of caspase-3 apoptotic pathway. The CQAs may be a class of compounds which possess potent myocardial protective activity against ischemic heart disease related to oxidative stress.

Study evaluated the combination of silver nanoparticles (AgNPs) and extracts of Lonicera japonica for antimicrobial activity against pathogenic E. coli CCC44113. Results showed the antimicrobial activity of AgNPs-HWE (honeysuckle water extract) against E. coli was significantly enhanced. The mechanism may be due to AgNPs causing cell wall lysis and damage to cell membrane integrity, thus increasing the penetration of HWE into the bacterium and causing more damage to bacterial cells.

Study evaluated the anti-inflammatory effects of L. japonica and the underlying molecular mechanism in lipopolysaccharide (LPS)-stimulated BV-2 microglial cells. Results showed LJ significantly inhibits LPS-stimulated production of nitric oxide (NO) and prostaglandin E2 (PGE2), among others. Collectively, findings indicate the antineuroinflammatory properties of LJ is LPS-induced BV-2 microglial cells is due to downregulation of proinflammatory cytokines and chemokines and downstream inhibition of NF-kB activation.

• Leaves contain saponins; although toxic, they are poorly absorbed and cooking, changing the water once, remove most of the saponins.