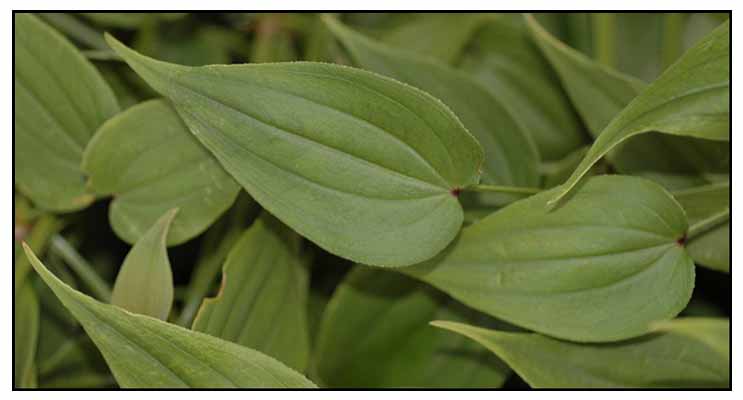 The scientific name of the Madder is Rubia cordifolia Linn.

Madder is a slender, branched, creeping or climbing herb growing to a height of about 4 meters, with numerous small prickles on the stems. Leaves are 4 to 7 in a whorl around a central stem, ovate, 3 to 5 centimeters long, pointed at the tip, heart-shaped at the base, and rough above, on the veins beneath, and especially on the margins, being furnished with small, white, recurved prickles. Petioles are long – about twice as long as the blade – with many sharp, recurved prickles on the angles. Flowers are minute, white or yellow, and on short, smooth stalks. Corolla-tube is thick and very short, lobes being ovate and obtuse. Fruit is rounded, 6 to 8 millimeters long, shining, and purplish black. 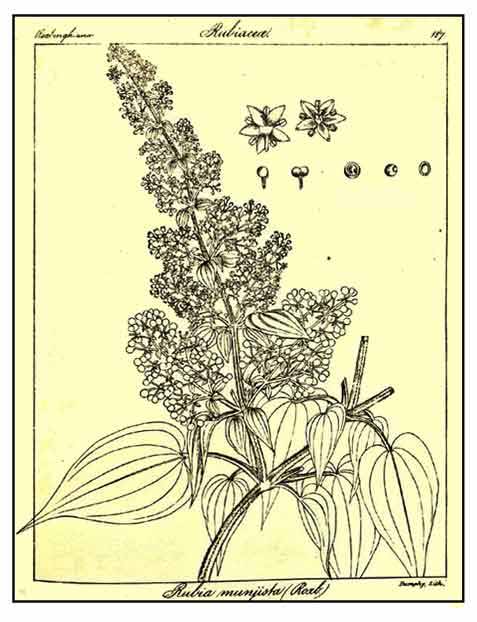 – Found in Ifugao, Lepanto, Bontoc, Benguet, Rizal, Laguna and Tayabas Provinces in Luzon; and in Lanao and Davao in Mindanao.

– Also occurs in Japan to India, Malaya and tropical Australia.

– Munjistin, a coloring principle, has been isolated from the roots. It has been found to be identical with purpuro xanthin-carboxylic acid. A Perkin and Hummel study concluded the coloring principles of Rubia sikkimensis and R. cordifolia are very nearly identical; both contain purpurin, munjistin and purpuroxanthin.

– In Tanzania, ash of burnt stems used as vegetable salt to soften vegetables in cooking.

– In Indonesia, leaves are used as side dish with rice.

– In the Philippines root decoction used for certain disorders of the urinary tract.

– Worldwide, popular for its use in skin diseases like eczema, dermatitis, skin ulcers.

– In India, used for treatment of cuts, wounds and burns.

– In Ayurveda, used to cure the Kapha, inflammatory diseases of the uterus and vagina, leucoderma, jaundice and piles.

– Mixed with honey, it is applied to brown spots of pityriasis versicolor.

– The Mahometans used the drug as deobstruent, prescribing it in paralytic affections, jaundice, obstructions of the urinary passages and amenorrhea.

– Fruit is used for hepatic obstruction.

– Decoction of roots and stems used as vermifuge.

– Paste made of roots and honey used for freckles and other skin discolorations. Paste of roots also used for ulcers, inflammation and skin affections.

– Hakims used root infusions to women after delivery, to procure a copious flow of lochia.

– In Uganda and Tanzania, leaves used as poison antidote. Decoction of crushed leaves used for treatment of mouth sores and diarrhea.

– In Ethiopia, leaves used for malaria, itches, and to stop bleeding. Also, for amoebic dysentery, cancer and cough.

– In Tanzania and Kenya, rubbed and balled leaves used as antiseptic and to stop wound bleeding. Root decoction used as emetic for certain stomach problems.

– In South Africa, roots used as aphrodisiac and in the treatment of impotence.

– In Hindu medicine, madder is used as coloring agent, providing color when boiled with medicated oils.

– Used as a dye plant in Asia where red dye extracted from roots and stems have been used to dye silk, linen, cotton fabrics (chintz) and woolen carpets and blankets.

– In South Africa, roots are used to dye wool. In Ethiopia use to dye wool and bread baskets in shades of pink, red, purple or maroon.

– In Burundi a leaf decoction used for hemorrhagic diarrhea in newborn calves. Also, used in treatment of fleas, ticks and mites in animals.

Scientific proven studies on benefits and uses of Madder

Study showed a protective effect of the hydro-alcoholic extract of R. cordifolia roots against ethylene glycol-induced urolithiasis in rats. Mechanism may be through antioxidant nephroprotection and an effect on urinary concentration of stone-forming constituents. (5)

One of the major constituents of the roots is ruberythric acid, widely used as phytotherapy in treating urinary tract calcium containing stones.

Study of animals with ß-amyloid induced cognitive dysfunction pretreated with an ethanolic extract of R. cordifolia showed significant protective effect on neurodegeneration and showed improvement in memory retention activity. The neuroprotective activity of the plant on alzheimer’s type dementia may be due to inhibition of AChE, MAO, free radical scavenging activity. (6)

Study in Wister rats investigating the activity of R. cordifolia against experimentally induced gastric ulcer showed the chloroform fraction with significant activity at lower doses compared to the parent extract. Mechanism can be attributed to decrease gastric acid secretory activity along with strengthening of the mucosal defensive mechanism by prostaglandin synthesis and antioxidant potential. (7)

Study of several extracts evaluating the free radical scavenging activity of R. cordifolia showed very high correlation coefficient of the concentration used and radical scavenging activity of all the extract/fractions. Phytochemicals showed presence of anthraquinones and their glycosides. Results showed constituents that may be exploited in the food industry as chemopreventive agents. (9)

Study of alcoholic extract and its hydrogel for its healing efficacy on an excision wound model in mice showed significant effects in wound contracting ability, wound closure, decrease in wound surface are and tissue regeneration at the wound site and histopathological improvement. Results provide scientific rationale for the traditional use of the plant in the management of wounds. (11)

Study in rats of anti-inflammatory and analgesic effects of the methanolic extract of roots showed significant reduction of carrageenan-induced paw edema and significant increased reaction time in tail flick test. (12)

Study in rats showed the hepatoprotective activity of an aqueous-methanol extract of R cordifolia in acetaminophen and CCl4-induced hepatic damage. (13)

Study of alcoholic extract of roots showed reduction of elevation of blood glucose in alloxan treated animals. There was also enhancement of brain GABA and decreased brain dopamine and plasma corticosterone levels. (17)

Study of alcoholic extract of leaves in norma and alloxan-induced diabetic rats showed decreases in blood glucose and promising antidiabetic. Serum cholesterol and triglyceride levels were decreased and serum HDL was increased. (23)

A combination treatment with R. cordifolia showed a significant reversal of lead nitrate-induced toxicity on oxidative stress and immunological parameters. The RC can prevent LN-induced immunosuppression from oxidative stress due to it antioxidant property. (25)

Study evaluated crude extract of Rubia cordifolia for possible calcium channel antagonistis activity.. The extract exhibited spasmolytic activity similar to verapamil suggestive of the presence of calcium channel blocker like constituents, which may explain the folkloric use of the plant for disintegration of unrinary stones. (26)

Study of an ethanolic extract of stem in carrageenan induced paw edema in rats showed anti-inflammatory activity. Indomethacin was used as standard. (28)

Study reports on the presence of dibutyl phthalate in the fruits of R. cordifolia and evaluated the acute toxicity of crude ethanolic extracts in Swiss albino mice. No mortality was observed with 100, 500, and 1000 mg/kbw doses, indicating an LD50 value higher than 1000 mg/kbw. Study showed a significant change in body weight, with differences in ALT, total protein, triglycerides, glucose and histopatho analysis of the liver compared to control. Results highlight the toxic potential of R. cordifolia fruit extracts and its toxicity profile. (29)

Mollygin, a major active constituent of R. cordifolia, is recognized for a potential anti-tumor compound. Study reports of an extraction method with a yield higher than conventional extraction methods. (30)

Study evaluated the in vivo antioxdant activity of an alcoholic extract of roots and its influence on ethanol induced impairment of immune responses. Study suggests the ethanol-induced immunosuppressive is due to oxidative stress which can be prevented by RC through its in vivo antioxidant property. (32)

Study showed the root extract of Rubia cordifolia has significant antiglycation and antioxidant activity indicating a potential for use as as antidiabetic drug. (34)

Scientific studies links for this article