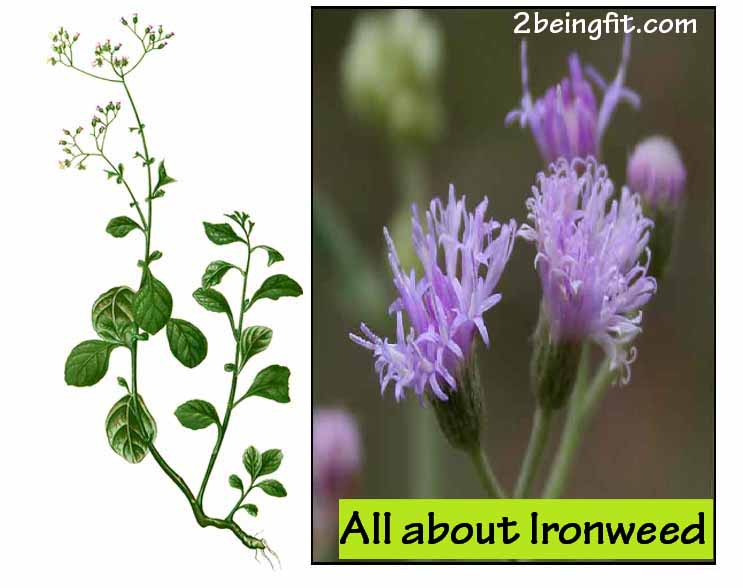 Ironweed is an erect, slender, sparingly branched, somewhat pubescent annual herb, growing up to 20 to 80 centimeters high. Leaves, smaller at higher altitudes, are oblanceolate to obovate, 2 to 6 centimeters long, with pointed or obtuse tips, with shallowly toothed margins. Heads are small, stalked, borne in open, lax corymbs, and about 7 millimeters long and 2.5 millimeters in diameter. Flowers are rather bright-purple, all perfect, the corolla all equal, tubular, slender 5-lobed, about 20 in each head, twice as long as the involucral bracts which are linear and silky. Fruits are achenes, striate, ribbed or angled; pappus hairs numerous.

– Throughout the world in open, waste places in all settled areas at low and medium altitudes.

– A common weed, flowering all the year.

– Occurs in the Old World Tropics.

– Study of hexane extract of flowers isolated a new sesquiterpene lactone, 8a-hydroxyhirsutinolide (2), and a new naturally occur- ring derivative, 8a-hydroxyl-1-O-methylhirsutinolide (3), along with seven known compounds (1 and 4– 9). (See study below) (31)

– According to Ayurveda, the herb is sweet, cold, tonic, stomachic, astringent.

• In the Philippines infusion of plant taken internally for cough.

• Used for colds and fever; also for acute jaunditic hepatitis.

• In Chuta Nagpus whole plant used as remedy for bladder spasms and strangury.

• Root given for dropsy.

• In Patna, leaves employed as alexipharmic and anthelmintic.

• In the Nighantas plant used for asthma, bronchitis, and consumption.

• In India, whole herb juice is used most frequently – for eye problems. Also used for poisonous insect and snake bites. As a tonic, taken twice a month with milk. For ringworm, applied to affected parts with milk. Used for all types of fever and considered one of the best remedies for typhoid.

• In Ayurveda, used for consumption, asthma, bronchitis and fevers.

• In Senegal and French Guinea plant infusion used to wash newborn infants; also used for children with incontinence of urine.

• In Ceylon, used for wounds and sores; taken internally to promote sweating.

An alcoholic extract from the flower of Vernonia cinerea was tested in adjuvant arthritic rats. The extract reversed major histopathological changes in the arthritic hind paws. Phytochemical studies revealed the presence of alkaloids, saponins, steroids and flavanoids. The study concluded that the extract contains a yet-unidentified anti-inflammatory principle. (2)

Methanol extract of VC was found to scavenge hydroxyl radicals and nitric oxide. It also significantly inhibited carrageenan-induced inflammation together with down regulation of pro-inflammatory cytokine level and gene expression. (5)

Veronia cinerea has been used in traditional Thai medicine to relieve cigarette craving. A 24-week, randomized, single-blind, placebo-controlled, parallel trial on 64 subjects randomized to an infusion of 3-gm crushed dried whole plant of VC in infusion three times daily or placebo. Results were promising and suggest that VC may be a potential alternative to treatment for smoking cessation with significant cost savings. Large scale trials are needed to verify its efficacy. (7)

Chloroform, methanolic and ether extracts of VC showed to possess analgesic, anti-inflammatory and antipyretic effects together with changes in behavioral activities. (10)

VC was one of 40 different medicinal plants that showed bioactivity against Corynebacterium macginleyi. (12)

A methanol extract which exhibited antimicrobial activity was tested for toxicity in mice. The extract did not show toxic effects in mice and brine shrimp in acute toxicity study. (4)

A herbal powder prepared from leaves showed ameliorative hepatoprotective activity on both pre- and post-treated groups of CCl4-induced hepatic dysfunction in rats. (21)

Study evaluated the antidiarrheal activity of whole plant of V. cinerea. Results showed a reduction in peristaltic movement of the GI tract of animals., with significant and dose-dependent decrease in the number of wet faeces and total number of faeces compared to control rats. (24) Study evaluated the anti-diarrheal activity of aqueous extract of whole plant of V. cinerea against castor oil-induced diarrhea, enteropooling and small intestine transit models in rats. Results showed anti-diarrheal effects in all test models and substantiates the folklore claim as anti-diarrheal agent. (41)

A sesquiterpene lactone, Compound 1, possible a Hirsutinolide type, isolated from V. cinerea was evaluated against alloxan induced diabetic rats. Results showed a significant reduction of blood glucose, possibly through potentiation of insulin effect of plasma by increasing pancreatic secretion of insulin from ß cells of the islets of Langerhans or its release from bound form. (29)

Study evaluated a crude extract for anti-diarrhea, anxiolytic, antimicrobial and membrane stabilizing activities. There was significant and dose-dependent anti-diarrheal activity in the castor-oil induced diarrhea model in mice. The anxiolytic effect was compared with standard anxiolytic drug diazepam. There was moderate antimicrobial activity against Blastomyces dermatitidis. There was inhibition of heat-induced hemolysis of RBCs in RBC stability test. (30)

Study evaluated the radioprotective effect of VC extract against gamma-radiation induced immunosuppression and oxidative stress in balb/c mice. Treatment reduced enzyme elevations (ALP and GPT) and lipid peroxidation after irradiation. There was reduction of pro-inflammatory cytokines that increased with irradiation. Administration of V cinerea did not compromise the anti-neoplastic effects of radiation; rather, there was a synergistic action of radiation and V. cinerea in reduction solid tumors. Results suggest potential as adjuvant during radiation therapy. (31)

Study evaluated the safety of ethanol extract of Vernonia cinerea whole plant in acute and chronic toxicity studies in rats. On acute toxicity study, extract was found safe at doses of 2000 mg/kbw orally with no toxicity or death. In chronic toxicity study in rats in doses of 100, 200, and 400 mg/kg once weekly for six weeks, no significant changes were noted in hematologic, renal, and hepatic parameters at the termination of the study. (36)

Study showed the supplementation with V. cinerea and exercise provided benefit related to reduced smoking rate, which may be related to oxidative stress and beta-endorphin levels. (37)

Study evaluated the ameliorative potential of ethanol extract of whole plant of VC in chronic constrictive injury (CCI) of sciatic nerve induced neuropathic pain in rats. Results showed dose dependent attenuation in pathologic changes induced by CCI, similar to attenuation of the pregabalin pretreated group. The effect may be due to the presence of flavonoids and attributed to antioxidative, neuroprotective, and calcium channel modulation. (38)

Study evaluated the anticataleptic effect of ethanol extract in haloperidol induced catalepsy in rats using block method, locomotor activity in actophotometer and exploratory behavior in hole board apparatus. Results suggest the protective effect against symptoms of Parkinson’s disease (catalepsy) may be due to regulation of neurotransmitters such as dopamine, serotonin, glutamate. (42)