The scientific name of Japanese alnus is Alnus japonica Steud.

Arnus is a small- to medium-sized deciduous tree growing to a height of 15 meters. Leaves are alternate, narrow-elliptic, acuminate, wedge-shaped at the base, up to 12 centimeters long, glossy and dark green above and pale underneath, the margins slightly toothed. Flowers are staminate, in long catkins; the pistillate flowers are in short catkins, becoming woody cones with 5-lobed scales.

– Propagated by seed or grafting.

– Two diarylheptanoids, oregonin and hirsutanone were isolated by bioassay-guided fractionation of the methanol extracts of the leaves of Alnus japonica Steud and their structures were elucidated from their spectroscopic data. Compounds exhibited significant low-density lipoprotein (LDL)-antioxidant activities. 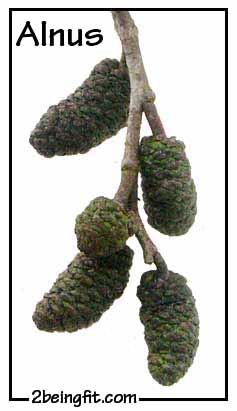 – Various species of alder, including this species, seem to contain antitumor compounds.

– Dye is obtained from the bark.

Study isolated two rare acylated diarylheptanoids from the bark of A japonica – oregonoyl A and oregonoyl B, with nine known compounds. Platyphyllone, was strongly active, and platyphyllonol-5-xylopyranoside was moderately active on antiviral testing, compared with positive control, zanamivir.

Study isolated reported the inhibitory effects of two diarylheptanoids from the methanolic extracts of Alnus japonica leaves on the expression of adhesion molecules in human umbilical vein endothelial cells. Results suggest the compounds may be useful in prevention and treatment of atherosclerosis.

Study isolated 5-O-methylhirsutanonol (5-MH) from the leaves of A japonica which exhibited antioxidant activities on Cu2+ and AAPH-mediated LDL oxidation and well as macrophage-mediated LDL oxidation. 5-MH also suppressed the expression of inflammation-associated genes, such as tumor necrosis factor alpha, COX-2 and IL-1ß.

Study isolated hirsutenone from the bark of Alnus japonica. Results showed hirsutenone may specifically inhibit calcium-activated processes in both T cells and mast cells and presents a potential for a new topical drug for atopic dermatitis, probably through a calcineurin inhibitor-mimicking mechanism.

Study suggests that ORG restrained I/R-induced ROS production might be correlated to its inhibitive effect on NADPH activation.

The papain-like protease, which controls replication of the acute respiratory syndrome coronavirus is identified as the potential drug target for the treatment of SARS. Of the nine diarylheptanoids isolated from Alnus japonica, hirsutenone (compound 2) showed the most potent PL inhibitory effect.

Study evaluated the immunomodulatory effect of A. japonica in a model of atopic dermatitis in NC/Nga mice. Leaf and bark extract suppressed the development of AD-like skin lesions, with decrease in blood eosinophils and decrease in serum IgE and Th2-related cytokine levels. Results suggest the leaf and bark extract may prove useful in the treatment of atopic dermatitis and other allergic skin diseases.

Study evaluated the dyeing properties of cotton and silk fabrics dyed with A. japonica bark and heartwood extracts. Results showed tannin to be the major colorant component. Silk dye intake was better than that of cotton. Although washing fastness was not good, light, dry cleaning, and perspiration fastness were moderate. Also, rubbing fastness was moderately good grade. Dyed fabrics showed very good antimicrobial abilities of 99.9% against S. aureus and K. pneumonia.

Seeds in the market.