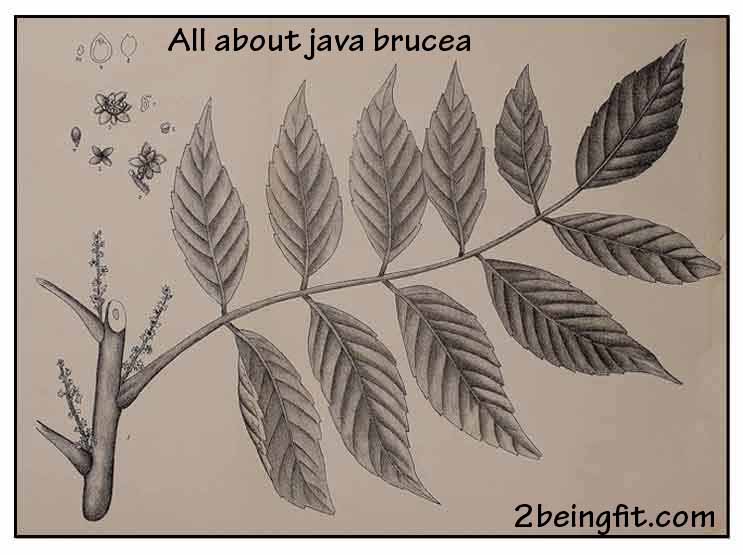 The scientific name of the java brucea is Brucea javanica (L.) Merr.

Java brucea is a somewhat hairy shrub, 1 to 3 meters high. Leaves are alternate, compound-pinnate, about 30 centimeters or more in length. Leaflets are 5 to 11, 4 to 10 centimeters in length, 2 to 4 centimeters wide, pointed at the apex and rounded or pointed at the base, with prominently toothed margins. Flowers are small, reddish, occurring in axillary inflorescences. Fruit is oval, black when ripe, smooth, reticulated, about 0.5 centimeter long. Seeds are dark brown, compressed and rugose.

– In thickets at low altitudes in Pangasinan Province in Luzon; in Leyte; Palawan: Negros; and Surigao, Bukidnon, Cotobato, Misamis Provinces in Mindanao, and in Basilan.

– Also reported in India to southern China through Malaya to Australia.

– Studies yielded tannin 1.5%, and a small amount of hydrolytic enzymes.

– Seeds may be toxic in single full doses, especially the powdered form, and can produce nausea, vomiting, abdominal pain and purging.

– No toxic signs or symptoms were observed when the seeds were administered in divided doses.

– On examination of a small amount of stool with living dysentery amoeba mixed with 2% cold infusion of powdered seed (free oil), the amoeba became round and died instantly.

– Expressed oil has no amebicidal action although the ethereal extract has.

– In some parts of Asia, considered anti-malarial, antipyretic, and homeostatic.

– In the East Indies, all parts of the plant are used as stomachic tonic; also used for diarrhea, intermittent fever and worms.

– Seed has been reportedly used as remedy for most types of pernicious dysentery.

– Seeds used for malaria, with effects comparable to quinine.

– In Indonesia, fruit used for fever and as anti-malarial.

Study has yielded an indole alkaloid canthin-6-one. The compound and its hydroxylated and methoxylated derivatives have demonstrated marked cytotoxic activities against malaria, leukemia, carcinoma, keratinocytes of guinea-pig ear, and bacteria (Anderson et al, 1983.)

In a study of the crude methanol extracts of four Philippine medicinal plants for their antioxidant activity, B amarissima showed to be the most potent. Phytochemical screening yielded flavonoids, tannins, triterpenes, steroids, anthraquinones, anthrones, flavanoid glycosides and coumarins.

Study isolated javanacin, a novel quassinoid from the seeds of B. javanica.

Study of B. javanica seeds isolated bruceines E and D which were administered to STZ-induced diabetic rats. Results showed reduction of blood glucose concentration by both bruceines comparable to glibenclamide probably by acting as an insulin secretagogue.

Study showed of extracts of B. javanica fruit showed anti-malarial activity that was attributed to its quassinoid constituents. Nine of the quassinoids showed activity against chloroquine-resistant Plasmodium falciparum.

Study evaluated the growth inhibitory effect of a crude aqueous leaf extract of B. amarissima. At higher concentration (6mg/mL), the extract exhibited significant growth reduction and also reduced the µ-values of all Candida strains by more than 90%. Results showed fungistatic (<6mg/mL) and fungicidal (>6mg/mL) activities, presenting as a promising candidate as a natural antifungal.

Study evaluated the oral acute toxicity of leaves extract on male and female DDY-mice. Single oral doses of leaves extract up to 4500 mg/kbw did not induce acute toxic effects. However, there were 26 deaths during the experimental period. Data suggests mild toxicity. Considering the dose, the body effects/damage were minor and not permanent.

Study evaluated expression of HWP1 following treatment with Piper betle and Brucea javanica aqueous extracts. The expression levels were reduced with higher concentration of B. javanica extract. B. javanica and P. betle have potential to be developed as oral health products.

Study investigated the antileukemic potential of BJO in human myeloid leukemia cell lines (AML) U937 and HL-60 in vitro in mouse U937 tumor model. Results showed BJO induced AML cell apoptosis through activation of caspase-8 and modulation of apoptosis-related proteins.

Study evaluated an ethanol extract of BJ seed for antioxidant and antidiabetic activities. An ethyl acetate fraction (EAF), rich in tannin, showed the strongest antioxidant activities to DPPH, FRAP, and NORSA. Along with GPα inhibitory activity, EAF effectively improved glucose tolerance. Rats treated with EAF showed a 39.91% decrease (p<0.05) in blood glucose at 30 minutes with a continuous fall at 60 and 90 minutes.

Study investigated the prophylactic and therapeutic effects of ethanol extract of B. javanica on coccidiosis induced by Eimeria tenella in broiler chickens. Results showed considerable anticoccidial effects and a promising potential in controlling avian coccidiosis.

Extracts in the market.