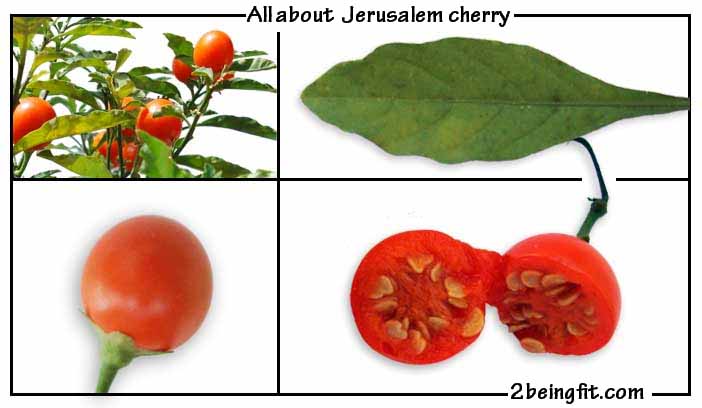 The scientific name of the Jerusalem cherry or Christmas cherry is Solanum pseudo-capsicum Linn.

Jerusalem cherry is an erect, branched and non-spiny shrub growing to a height of one meter. Leaves are alternate, oblong to lanceolate, up to 10 centimeters long, wavy, glossy green above. Flowers are nodal, white and solitary. Fruit is globose, yellow or reddish, up to 1 centimeter in diameter.

– The roots yielded a high percentage of fatty acids with 41 compounds; the dominant compound was hexadecanoic acid (24.1%).

– Studies have implicated the berries in causing central anticholinergic syndrome characterized by thought impairment, recent memory disturbance, hallucinations, hyperpyrexia, ataxia, drowsiness, tachycardia, coma among others. Extract studies were predominated by alkaloids (38.55%). Other plant components detected were aramines, phentamins, dopamine, fluoxotine and amphetamine derivatives – potent psychostimulant in humans. Many of the compounds have pharmacological and toxicological importance in humans and the berries present of source of raw materials for drug development. (Research Paper)

– In South Africa, reported topical use for treatment of boils and gonorrhea; orally, as a male tonic and for abdominal pain.

In vitro antioxidant properties of Solanum pseudocapsicum leaf extracts: Crude methanolic extracts exhibited potent antioxidant activity. However, it exhibited no activity in the scavenging of hydroxyl or superoxide radicals.

Antitumor activity of total alkaloid fraction of solanum pseudocapsicum leaves was tested against Dalton’s Lymphoma Ascites model in mice and revealed increase in mean survival time and life span of tumor-bearing mice. The observed activity may be due to its cytotoxic properties.

Study on leaf extracts has isolated 0-methylsolanocapsine with in vitro cytotoxic properties against some cancerous cell lines and merits in vivo studies to confirm its antitumor activity.

Alkaloid fraction of the methanol extract of Solanum pseudocapsicum was tested for hepatoprotective activity against CCl4 induced toxicity in rat hepatocytes and showed antihepatotoxic effect at very low concentrations and suggests further studies of the alkaloid fraction to identify the active principles.

Hydrodistillation yielded 41 compounds (50% of the oil) from the roots of Solanum pseudocapsicum. The dominant compounds were hexadecanoic acid (24.1%), 2-methoxy-3-isopropylpyrazine (2.8%) and 15-methylhexadecanoic acid (2.1%). The high proportion of the fatty acids was considered to be contributory to its medicinal properties.

All five alkaloid fractions of the methanolic extracts of leaves, ripe fruits, roots, seeds and stems of SP showed potent cytotoxic activity with the HT-29 cell line showing the most sensitivity. The most potent was found in the fraction of leaves.

• Chemical and Nutrient Analysis of Berries:

Analysis of berries yielded 25 components, constituting 99.8% of extract composition. The extract was dominated by alkaloids, hydrocarbons, fatty acids, alcohols and the derivatives of carboxylic acid. The presence of other components such as aramines, phentamines, dopamine, fluoxotine and amphetamines are noteworthy.

Various extracts of leaves, fruits, and roots of S. pseudocapsicum were investigated for antimycotic activities. Acetone and methanol extracts showed significant growth inhibition of Aspergillus niger and Penicillium notatum and marked suppression of growth of Fusarium oxysporum. Results suggest a potential application as a fungicide.