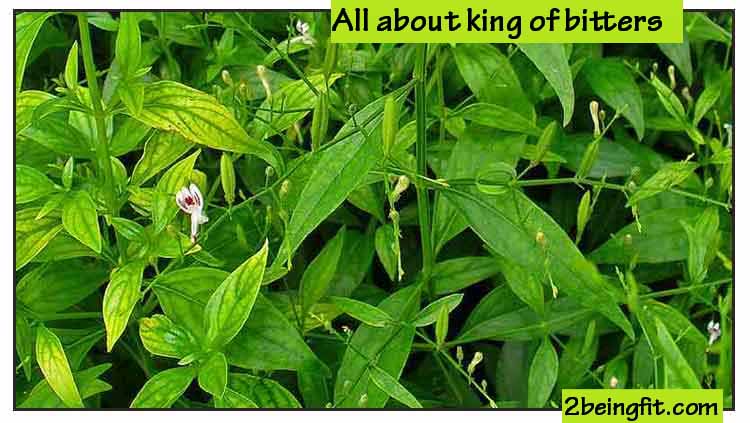 King of bitters is an annual herb, erect, growing to a height of 30 to 100 centimeters. Stems are quadrangular. Leaves are simple, opposite, lanceolate to ovate-lanceolate, glabrous. Flowers are white, bilabiate, with rose-purple spots or markings in the lower lip in axillary or terminal racemes or panicles. Fruit is a capsule, linear-oblong, up to 2 centimeters long and 4 millimeters wide, furrowed, compressed longitudinally with small seeds.

•The active constituent of the extract is andrographolide.

Medicinal properties of king of bitters

– Used for fever and liver ailments.

– Extensively used in Ayurvedic medicine. Is in 26 Ayurvedic formulations to treat liver disorders.

– Called “Indian echinacea” for its use in the prevention and treatment of the common cold.

– In Traditional Chinese Medicine, use for fevers and to remove toxins from the body.

– In Scandinavian countries, used to prevent and treat common colds.

Science proven health benefits and uses of king of bitters

• In China, found effective in preventing blood clots and re-clogging of arteries post-angioplasty.

• May inhibit the growth of human breast cancer cells.

• Studied for its anti-viral activity in HIV and AIDS, found to increase AZT’s ability to inhibit HIV replication.

Study of extracts of A paniculata and Hedyotis corymbosa, known hepatoprotective and fever-reducing was tested for antimalarial activity. Results suggested further studies for a potential herbal drug for malaria treatment.

CoMethanolic extracts of A paniculata and H corymbosa showed inhibition of the ring stage of the parasite without in vivo toxicity, whether used in isolation or in combination with curcumin.

Study was done on the antivenom activity of A paniculata and Aristolochia indica plant extracts against Echis carinatus venom. Results showed both plant extracts could for used for therapy in patients with snakebite envenomation.

Study compared Kan Jang, a fixed combo of Andrographis paniculata extract (SHA-10) and Acanthopanax senticosus, with Valeriana officinalis and Panax ginseng for spermatogenesis and semen effect. Results showed all three to be safe with respect to effects on human male sterility.

Review of data suggest that A paniculata is superior to placebo and may be a promising treatment for the subjective symptoms of acute upper respiratory tract infection. With few reports of adverse events with short-term use, A paniculata presents as an herbal treatment option.

Results of study of water extract of A paniculata suggest that due to lower level of hormone, female rats have promising percentage of infertility with AP.

Study of aqueous extract of whole plant of A paniculata exhibits a significant renoprotective effect in gentamicin-induced nephrotoxicity in male Wistar albino rats.

Study of evaluated the antiviral effects of six plants on dengue virus serotype 1 (DENV-1). Results showed the methanol extracts of A. paniculata and M. charantia possess the ability of inhibiting the activity of DENV-1 in in vitro studies.

Study of an aqueous and ethanol extract of A. paniculata showed significant anti-ulcer and cytoprotective properties and inhibited leukocyte infiltration of the gastric wall.

Andrographolide is a major bioactive constituent of the plant. The paper summarizes its various experimental and clinical pharmacological activities, such as antioxidant, anti-inflammatory, anti-cancer, antimicrobial, parasitic, hepatoprotective, antihyperglycemic effects.

Study evaluated the effects of A. paniculata and A. lineata extracts against two mosquitoes Cule quinquefasciatus and Aedes aegypti. Results showed that insecticidal activity of plant combinations was ecofriendly and has better larvicidal activity compared to individual extracts.

Andrographolide exhibits anti-inflammatory and anticancer activities, either in vitro or in vivo experimental models of inflammation and cancer. Several immunomodulatory responses of andrographolide have been observed in in vitro studies, such as reduction of iNOS, COX-2, NO, PGE2, TNF-alpha and IL-12 in macrophages and microglia.

Study of an aqueous leaf extract of A. paniculata showed significant hepatoprotective effects against CCl4-induced hepatic injury in rats.

The anti-inflammatory activity of A. paniculata is commonly attributed to andrographolide, its main secondary metabolite. Standardized extracts showed considerable physiochemical background variation. DPPH radical scavenging activity was attributed to flavonoid/phenylcarboxylic acid compounds in the extracts. The inhibitory effect of andrographolide on the release of TNF-α was little affected by variation of non-standardized constituents.

Study evaluated the anti-malarial effect of sambiloto extract (A. paniculata), chloroquine and artemisinin-only as well as combinations on Plasmodium falcifarum strains. Results showed the extract of Sambiloto has an in-vitro anti-falciparum malaria effect. The antimalarial effect had been shown both in monotherapy and in combination.

• Extracts, capsules and supplement in the markets.