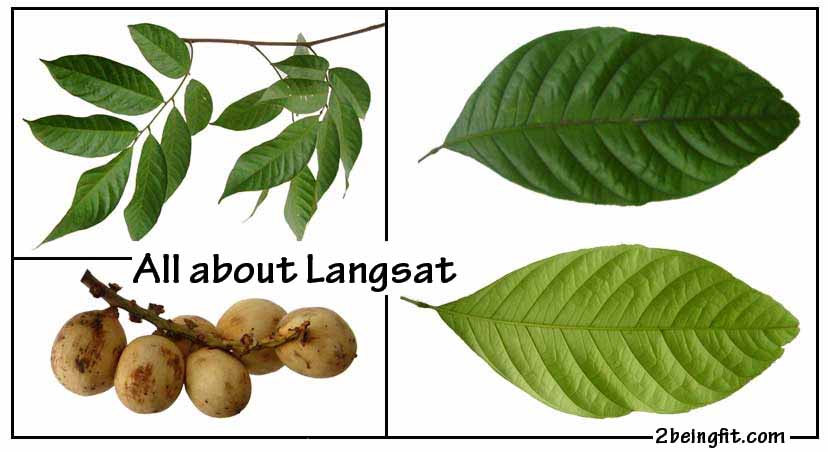 The scientific name of the langsat is Lansium domesticum Correa.

Langsat is a tree growing to a height of 4 to 15 meters. Leaves are alternate, 20 to 40 centimeters long, with 5 to 7 leaflets, oblong to oblong-elliptic, 7 to 18 centimeters in length, and pointed at both ends. Flowers are small, yellow and borne on spikes, solitary or fascicled on the trunk or larger branches. Fruit is yellowish-white, occurring in bunches on a single stem, ellipsoid or globose, 2 to 4 centimeters long, with bitter seeds that are surrounded by a translucent pulp (arillus). The outer skin is thin and tough, abundant in a milky juice. The pulp occurs in five sections with one well-developed seed.

– Cultivated for its fruit.

– Mainly occurs in Philippines, Indo-China, and the Malay Peninsula and Archipelago, in general cultivation.

The rind yields 6% lansium acid which is toxic.

The fresh peeling yielded a volatile oil, a resin, and some reducing acids.

The resin is believed to be nontoxic and protective to the stomach against alcohol.

The outer skin of the fruit is rich in tannin.

From the seeds, two toxic and bitter substances and traces of an alkaloid.

• Study yielded five tetranoterpenoids, domesticulide A-E (1-5) from the seed. The seed extract was rich in limonoids.

Bark is considered antipyretic and anthelmintic.

-The fruit pulp is succulent and delicious, and may be candied or preserved in syrup.

– Decoction of bark and leaves used for dysentery.

– Peel, rich in oleoresin, used for diarrhea and intestinal spasms.

– Bark resin used for flatulence and gastrointestinal colic, for swellings, and as antispasmodic.

– Grounded seeds mixed with water as vermifuge and antipyretic.

– Tincture prepared from the dried rind used for diarrhea and abdominal colic.

– In Java. seeds are used as vermifuge and antipyretic.

– In Indonesia, used for malaria.

Cosmetics or beauty benefits of langsat

– Cosmeceutical value from its antioxidant, moisturizing, whitening and lightening effects. Dry extract of fruit, re-dissolved in propylene glycol is used for skin depigmentation and as a moisturizer.

– The dried fruit skins when burned emit an aromatic smell which repels mosquitoes. It also makes a pleasant room inhalant.

– The juice of the bark and fruit is recorded as used for poison arrow.

Study yielded five tetratriterpenoids – domesticulide A-E from the seeds of Lansium domesticum together with 11 known triterpenoids. Eight of the compounds showed antimalarial activity against Plasmodium falciparum.

Extract of LD has shown to have antioxidant activity against DPPH free radical and anti-tyrosinase activity.

LD methanol extract was one of the study extracts that showed strong inhibition of melanin production of B16 melanoma cells without significant cytotoxicity, presenting as a potential ingredient for skin-whitening cosmetics if their safety can be confirmed.

Study isolated a new cycloartanoid triterpene from the leaves of LD. Some of the natural product derivatives show significant inhibitory activity on skin-tumor promotion on the basis of Epstein Barr virus activation.

Study evaluated the repellant effect of Lansium domesticum (lanzones) peel on mosquitoes. Results revealed that the effect of Lanzones peel as repellant is comparable to commercially available “katol,” a popularly used insecticide vaporizer.