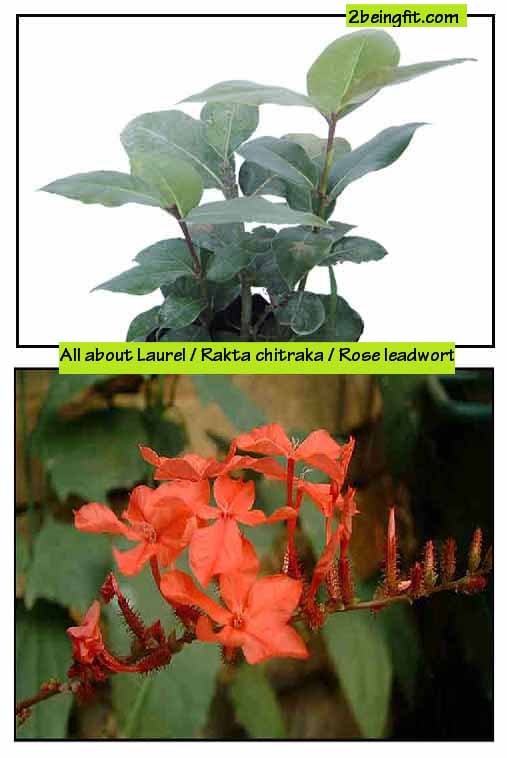 The scientific name of the laurel is Plumbago rosea Linn.

Laurel is an erect or spreading, more or less branched, hearbaceous or half-woody plant, 1.5 meters or less in height. Leaves are ovate to oblong-ovate, 8 to 13 centimeters long, smooth, slightly drooping, with entire, undulate or wavy margins, with a pointed or blunt tip and a pointed base. Spikes are 15 to 30 centimeters long. Calyx is tubular, 8 to 10 millimeters long, covered with stalked, sticky glands. Corolla is bright red, tube is slender, about 2.5 centimeters long, and the spreading limb, about 3 centimeters in diameter.

– Cultivated throughout many parts of the world for ornamental purposes for its showy red flowers. – Roots are the highest source of plumbagin, a naphthoquinone.

– Juice of the root is acridly pungent to taste, producing a severe, lancinating pain the tongue.

– Juice of the root is blistering to the skin.

– Leaves and stems are pungent in taste, but not as virulent as the root.

– Poultice of bark scrapping used as poultice for headaches.

– In India, root is used as abortifacient and antifertility medicine; root is used as irritant, introduced into the vagina and applied directly to the neck of the uterus. Juice of root used as powerful sudorific.

– Taken internally, root is poisonous and acts on the stomach as an acro-narcotic or narcotico-irritant poison. Taken internally or applied to the genital organs, it acts as an abortifacient.

– Juice of leaves and roots, alone or mixed with oil, used as application for rheumatism and paralysis, buboes, glandular swellings, and leprosy.

– Liniment made from bruised roots and mixed with oil used for treating rheumatism, paralysis, leucoderma, abscesses and scorpion stings.

– Roots also used for dyspepsia, piles, diarrhea, and to improve the appetite.

– In Myanmar, used for leprosy and syphilis.

Roots are the richest source of plumbagin, a major active compound and potential biomarker. Study presents a simple method for isolation of plumbagin from roots of Plumbago rosea, through precipitation out by addition of water to an acetone extract.

An in vivo study was done for tumor inhibitory and radiosensitizing effects of an Indian medicinal plant, Plumbago rosea on experimental mouse tumors. Results shows PE to have a weak antitumor effect, but may have a potential use in enhancing the tumor-killing effect of radiation.

The antitumor and radio-modifying properties of plumbagin were tested on mouse Erlich ascites carcinoma. Plumbagin showed inhibition of exponentially growing tumors. Its mode of anticancer activity was unclear in the study.

Plumbagin was found to have tumor growth inhibitory effects and contemplated for use in human cancer therapy.

Antimicrobial Activity in Vitro of Plumbagin Isolated from Plumbago Species: PR was shown to exhibit activity against yeast and bacteria suggesting the naphthoquinone plumbagin as a promising antimicrobial agent.

Study of ethanolic root extract of PR in mice showed severe diarrhea at doses above 1250 mg / kg. While a higher dose was tolerated in fractionated administration, it was shown to have growth inhibitory effect in both sexes.

Study showed the acetone and ethanol extracts to be effective in interrupting the normal estrous cycle of rats, with prolonged diestrous cycle and consequent temporary inhibition of ovulation. Both extracts showed significant estrogenic and antiestrogenic activities. It concludes that both extracts have antifertility effects.

Study investigated the macrofilaricidal activity of P. indica in vitro against Setaria digitata, a filarial parasite of cattle. Complete inhibition of motility was observed in various concentrations. The active molecule was identified as plumbagin (5-hydroxy-2-methyl-1,4-naphthalenedione). (10)